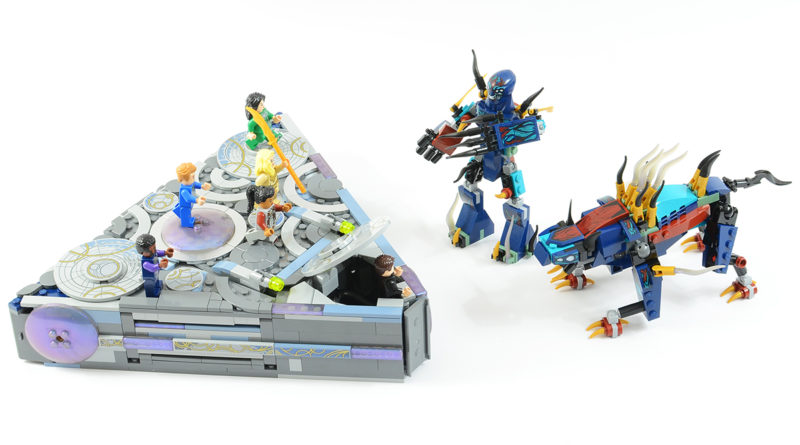 Is it a Dorito? A pizza slice? A samosa? Nope – it’s just the latest LEGO Marvel model, the triangular 76156 Rise of the Domo, which comes in as the largest of the four Eternals sets.

If you’re in the market for the least spaceship-looking spaceship to have ever spaceshipped, do we have a contender for you. Benny from The LEGO Movie might be perplexed, but let’s find out how perplexed we’ll be after taking a thorough tour of the Eternals’ spaceship in 76156 Rise of the Domo.

The 1,040 pieces in 76156 Rise of the Domo build up four things: the Domo itself, the Deviant leader Kro, a Deviant beast, and the dinkiest little hovercraft ever, which can be parked inside the Domo. This little thing looks like it time-travelled from the 1970s, and it’s even stranger that it’s included in the same bag with Ikaris, an Eternal who can fly.

With that thing out of the way, it’s on to the Deviants, who both look splendid. LEGO’s Mixels joints continue to work as brilliantly in 2021 as they did in 2014, making Kro supremely poseable and playable. He’s got an exclusive moulded head, asymmetrical tentacles coming off of him, and one gigantic sinewy hand, all making him appropriately mutated and sinister.

The Deviant beast also looks excellent and plays well. It’s a wonder that the LEGO designers can marry so many colours together without looking messy, but they’ve done it. Like other LEGO creatures, the parts for the eyes are printed, while stickers provide detail elsewhere on its body.

Turning to the Eternals’ spaceship itself, it’s certainly… unique. We dare say, an acquired taste. It has a bold design that looks unlike anything else, especially anything else the LEGO Group has done. LEGO being known for squares and sharp edges, the designers have proven their capabilities with this triangular ship covered in circular patterns. It certainly feels deluxe and ethereal as well, with its opalescent and metallic silver parts, and looping golden designs on prints and stickers.

Nevertheless, all of that design work might not result in something displayable, because it’s simply hard to tell what it is if you don’t know. And it’s not just that the Domo comes from a new Marvel property. Take, for instance, the Milano from Guardians of the Galaxy: people had no connection to that ship either before the film came out, but its design is readable as ‘spaceship’ and its height and details lent themselves to display. The Domo being flat, on the other hand, potentially looks more like a triangular jewelry box than a spaceship. Despite all of the details, by nature of its shape it lacks shelf appeal.

One thing the Domo should have going for it is its playability, since it has been designed to open up quite comprehensively without compromising its structural integrity (yes, it can be swooshed!). Its sides fold down and top discs fold up to reveal what looks like a lot of interior.

In the front is the cockpit, the one section not open to the rest of the interior. A lot of detail goes into the cockpit – in fact, more than can easily be seen once the set is finished, since the stickers running down the sides become obscured in darkness.

Three areas comprise the main interior: a central hall, a sort of armoury and parking bay to one side, and a room of accessories to the other. Phastos seems to be an inventor, so perhaps he has invented all of these, including an umbrella, a crow bar, microphones, a metal detector, video game controller, and a coffee machine.

The coffee machine highlights an overarching issue with the entire design of the interior, which is that it’s simply not as suited to interaction with minifigures as it needs to be. The coffee machine itself has a fun, novel design, but its placement puts the coffee mug pretty much on the floor, at a minifigure’s feet. A chair eats up most of the floor space in Phastos’s workshop, which is okay, but could’ve been on a swivelling plate so he could attend to various inventions.

The other side of the ship has even less space for posing minifigures, with the real estate largely being taken up by a place for that silly hovercraft and a stand with a gauntlet (albeit a very nice new gauntlet only included in this set and 76154 Deviant Ambush!). Minifigures interfere with the sides and roof closing in numerous positions, which also must be taken into account if you want to pose characters and close up the ship.

The central hall fares better than the rest of the interior, with its intriguing floor patterns and details on either end. On one end stands a mini-build of Arishem from 76155 In Arishem’s Shadow, which is quite effective despite its diminutive size thanks to roller skate pieces used for the eyes. On the other end is some sort of fancy gold apparatus, which looks great even if we don’t know what it is without seeing the movie.

Those central floor pattern stickers themselves are a bit frustrating to apply, though. There are three of the same sticker, which should be placed so that they give the impression of a golden circle continuing across them, and a top-down view in the instructions would have been helpful in aligning the patterns with surrounding studs to achieve that. As it is, only a typical angled view is provided, and you have to hope you get it right or you’ll be left with something that reads more as an oval, like we have.

An odd factor of the size and scale of the ship comes into play in the central hall. By necessity, the LEGO Group has to downsize ships from their source material all the time, but usually that doesn’t feel too obvious. For instance, recent Star Wars capital ships have provided an interior scene that’s to scale with minifigures, while the overall ship is not. Here, however, the interior feels out of scale with minifigures. Without minifigures, the hall’s side columns look like they represent something tall and grand. Once a minifigure is placed next to them, though, those columns suddenly look miniature, as if the people are giants.

The proportions of the overall Domo do not match well to the on-screen material, which is considerably flatter, but that’s forgivable because the set couldn’t be too big and needed to accommodate minifigures standing inside, even if it doesn’t do that as much as we’d like. The problems of the Domo’s scale are exacerbated when it’s placed next to the Deviants, however. Kro and the Deviant Beast feel appropriately scaled to minifigures, if not oversized, which causes a deep mismatch with the downsized Domo.

As with all of the Eternals sets, the minifigures in 76156 Rise of the Domo stand out as a true highlight. The LEGO Group has placed half of the 10 Eternals in multiple sets, while the other five make only one LEGO appearance each. The two Eternals exclusive to this set are Druig and Phastos, who look excellent in their detailed outfits.

The LEGO Group originally developed two minifigure parts included here for the Eternals line, but given the film’s and sets’ delay, they wound up in other sets first. Makkari’s hair matches her film design very closely, but has already appeared in the CITY set 60307 Wildlife Rescue Camp and in dark brown in the Friends set 41685 Magical Funfair Roller Coaster. Phastos’ head has only otherwise appeared in 76178 Daily Bugle, so this set represents a much more accessible option for it.

Despite the rest of the faces being reused, they mostly look suitable. The most notable exception would be Ikaris, who unfortunately has the wrong hair colour and no facial hair, and Sersi does not look too much like Gemma Chan. Remarkably, though Thena’s headpiece has now been used for a number of characters, it works fairly well as a likeness of Angelina Jolie.

The trailers show that Thena can manifest weapons, and this set includes a special long blade from NINJAGO for her. A pack of power bursts pieces is also included for Ikaris and Phastos, which we haven’t pictured.

The US price of $89.99 feels appropriate for 76156 Rise of the Domo, especially given its piece count of 1,040 bricks. The Domo itself feels quite hefty, with a lot of parts packed in, and the two side builds of Kro and the Deviant beast add value. Once again, other regions besides the US have it worse – the UK price coming in parity at £89.99 is particularly harsh – but that’s a tale as old as time at this point. And compared to the wider Marvel line-up, even in those regions the price doesn’t feel too egregious.

76156 Rise of the Domo is one of those weird sets that might be less than the sum of its parts – literally. It’s a decent parts pack, with a reasonable price at face value.

Whether anyone would want to shell out the price for this subject matter is another question. The Domo itself, while an elaborate and unique design, looks befuddling. It looks like the triangular box that it is, which isn’t necessarily appealing. Scale is often problematic with LEGO sets, but it’s especially problematic here because the Domo is in a completely different scale than the excellent Deviants included.

Commendable design work and engineering have gone into making the Domo openable without falling apart, but then again the interior itself feels out of scale with minifigures and is less playable than we would hope.

Ultimately, for all but completists, fans of the film, or LEGO fans drawn to these particular parts and minifigures, 76156 Rise of the Domo could be one to skip. If you’re looking for a taste of Eternals, picking up 76155 In Arishem’s Shadow and 76154 Deviant Ambush! for only slightly less investment nets an extra minifigure and models that rank higher in overall playability and display value.

Support the work that Brick Fanatics does by purchasing your LEGO Marvel triangles using our affiliate links.

How long does it take to build LEGO Marvel 76156 Rise of the Domo?

It takes around two hours and 50 minutes to build 76156 Rise of the Domo. There are a lot of parts, and a lot of stickers you’ll want to meticulously apply.

How many pieces are in LEGO Marvel 76156 Rise of the Domo?

There are 1,040 pieces in 76156 Rise of the Domo, with a range of colours including beautiful opalescent parts, and excellent minifigures with accessories.

How much does LEGO Marvel 76156 Rise of the Domo cost?