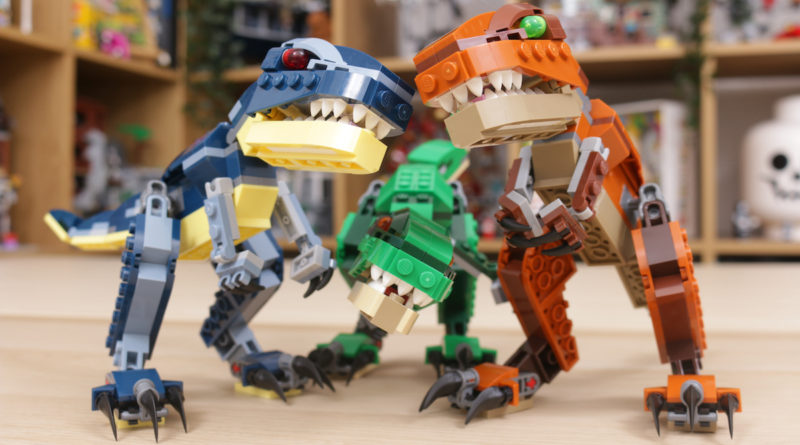 From the start of September through to the end of November 2021, the LEGO Group is running a pilot program in the UK to test different colours and sizes of sets. Alongside releasing a new colour of the currently-available 10271 Fiat 500 in the form of 77942 Fiat 500, and re-imagining 60215 Fire Station in the split form of 77943 Fire Station Starter Set and 77944 Fire Station Headquarters, this includes the re-release of 31058 Mighty Dinosaurs in two colour variations: 77940 Mighty Dinosaurs and 77941 Mighty Dinosaurs.

77940 Mighty Dinosaurs takes on the earthier nougat, brown and dark tan colour scheme, while 77941 Mighty Dinosaurs is based around a dark blue, sand blue and light yellow colour scheme. Otherwise identical in design and build to the original green, dark green and tan-based 31058 Mighty Dinosaurs, it’s interesting to consider what difference a lick of paint can make.

That means that the pieces for each set have been changed to new colour schemes, as has the box art and instructions for each respective model. These recoloured versions of 31058 Mighty Dinosaurs were released on September 1 and will be available until the end of November (or while stocks last) as part of a pilot scheme to test colour and size variation in sets. The exact reasons behind the move are curious and – even after a very interesting media event with the team at the LEGO Group – rather unclear.

There seem to be elements of genuine market research within the scheme, to ascertain how a developing market may reflect different tastes and preferences across different colours, and whether that is cost-effective for the company to offer on a wider basis. There also seems to be a hint of one-on-one comparison with specific retailers, to understand where and how customers are purchasing their LEGO in 2021, given each product is being made available specifically at LEGO.com, in LEGO stores and then at a selected retailer.

In the case of these sets, 77940 Mighty Dinosaurs (the nougat one) is available online at Smyths Toys and in select stores, alongside 77944 Fire Station Headquarters, whilst 77941 Mighty Dinosaurs (the dark blue one) will be found in select Tesco stores, as will 77943 Fire Station Starter Set. Given how much market research and testing the LEGO Group does during the development stage of each LEGO set it produces, it is curious to have any sort of similar activity spill over into the wider market, even if locked to the UK for this time-limited period.

As far as the selection of products to re-colour or re-size, the company could not have picked a better Creator 3-in-1 set to play around with. 31058 Mighty Dinosaurs is one of the theme’s strongest sets of recent years, and has justifiably been enjoying an extended stay on toy shelves (perhaps due to this intended trial).

The three models you can put together are all equally as strong as each other, all the while remaining thematically connected to each other. At the same time, given the continued discussion around what colours dinosaurs really were when they were around, there’s perhaps no other set more apt to experiment with colour than this one.

And so, what to make of 31058 Mighty Dinosaurs in two sets of different colours? It’s really quite interesting. More so than with the recoloured Fiat, which takes something that is all yellow and turns it all blue, the recolours of 31058 Mighty Dinosaurs are of broader colour palettes. It’s a fascinating study of how colours interact with each other, complement or play off each other for a wider visual effect.

With the application of an earthier colour selection, 77940 Mighty Dinosaurs is able to give a new identity to its subject that, in the brighter green mix, was previously more juniorised. With a comparatively toned-down selection of colours all over, it’s the version of the model that makes the eyes and teeth pop out in contrast the most.

Then thematically, 77941 Mighty Dinosaurs takes the set in a completely different direction, to transform the subject matter into something more unexpected and, with that dark blue skin and those red eyes in particular, something much darker.

Each of the three colour selections now available for this set brings a new identity to it – it’s just three copies of the same set, but it’s amazing how much tone and character can come from the selection of colours, and how each colour palette manages to pick out and highlight different aspects of what is otherwise the same exact model. Walking into a store to pick out one copy of Mighty Dinosaurs now makes for an intriguing choice, and one that hasn’t been available to LEGO fans before now.

77940 Mighty Dinosaurs and 77941 Mighty Dinosaurs are priced at £12.99 each, just as 31058 Mighty Dinosaurs is. It’s more than fair value for what is a truly remarkable 3-in-1 LEGO set where each of the three models is as strong as the others, and where thematically they are very cleverly linked. Does that mean you should buy nine Mighty Dinosaurs sets now in order to have the full collection? Quite possibly…

Recolouring LEGO sets isn’t guaranteed to work in every case, but choosing 31058 Mighty Dinosaurs to run part of the pilot program on is smart. It’s a fun trio of models that makes use of a subtle but important colour palette. The same rules around how that selection of colours has been used has been applied with new selections to both 77940 Mighty Dinosaurs and 77941 Mighty Dinosaurs, and it has managed to create a trio of the same set that couldn’t be more different to each other in appearance, style and tone.

If the LEGO Group is smart in which sets it chooses to recolour, what is currently a pilot program could be expanded into particular lines with great success and little for any of us to complain about (given the company says it will not impact shelf space for new sets). But it’s also worth considering that sometimes if it’s a choice between something that’s all red and the same thing that’s all blue, that’s a decision that the LEGO Group needs to make, as there are many models that come to mind where a recolour just won’t matter.

Support the work that Brick Fanatics does by purchasing these UK-exclusive LEGO sets through one of our affiliate links.

77940 Mighty Dinosaurs and 77941 Mighty Dinosaurs’ tallest model, the Tyrannosaurus rex, measures anywhere up to 18cm high in its tallest pose, and then as long as 25cm. The feet are the widest part of the model and measure 10cm across.