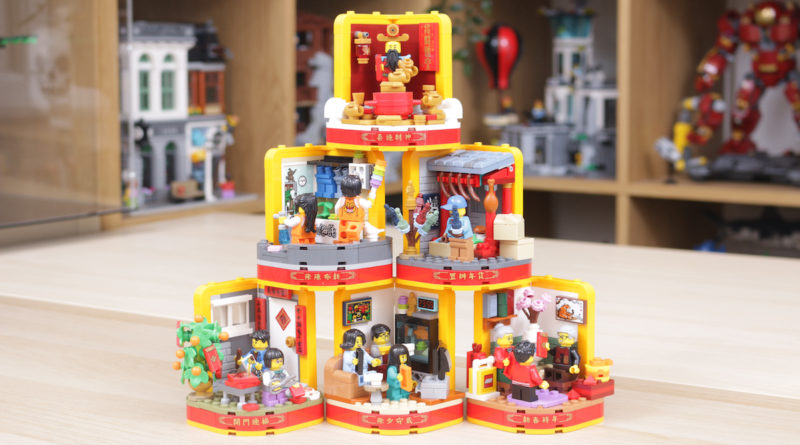 The LEGO Chinese New Year sets continue to go from strength to strength, with 80108 Lunar New Year Traditions the latest example of just why.

Serving up a modular build of six 9×9-stud vignettes that can connect together into one circular scene or stack into a cube-like display, 80108 Lunar New Year Traditions is more than just a seasonal gimmick of a LEGO set.

Packing in detail, colour, character and a lot of interesting things to build, it’s a fun and rather unique LEGO set, for those with ties to celebrating Chinese New Year and for those on the lookout for LEGO sets that are just a little bit different.

The most important aspect to 80108 Lunar New Year Traditions that makes it such an intriguing LEGO set is in the details. Yes, it’s a neat little trick that the six mini-builds combine together into either a hexagonal shape or a cube-stacked display, and yes that’s a lot of minifigures for a set just above 1,000 pieces.

But what makes the set really quite something are the details that are packed into each of the six vignettes. There is activity, character, colour and – most importantly – story jammed into each scene. The LEGO Group has done vignettes before, but nothing quite as clear and effective as this collective.

To understand why, it’s important to know that vignettes are about more than just building something you know out of LEGO and putting it into a small, square display with a backdrop. Vignettes are snapshots of life or captured moments from stories – they are artistic and interpretive and, done right, they can even offer new insight into the everyday.

To that end, every detail included in a vignette is deliberate and serves to tell part of the story, to paint part of the picture that the build (and builder) intends to. The details can make or break a vignette, and they are what pull someone into the scene or take them out of it. And it’s those details that really bring 80108 Lunar New Year Traditions to life in such an intelligent and charming way.

Across the six scenes built in 80108 Lunar New Year Traditions are snapshots of festive traditions for the Chinese New Year, and in each of them, such is the skill of their design, you instantly know what is going on, what the setting is and who is likely involved in each scene.

As the LEGO Group writes on its official website, these traditions include ‘food shopping, making good-luck decorations, visiting family and exchanging ‘Hongbao’ red envelopes’, and they are wonderfully captured in what is otherwise a small and challenging amount of real estate to work with.

Alongside six charming mini-builds come a staggering 12 minifigures. The Chinese New Year sets are quickly establishing their identity within the LEGO catalogue of sets, and part of why is simply for the relatively high number of minifigures included in each one.

For a set with a piece count of just over 1,000, a dozen included characters is disproportionately high, compared with sets from many other LEGO themes. But we’re certainly not complaining – particularly for the selection on offer in 80108 Lunar New Year Traditions. They may not all be exclusive, but they all work perfectly as designs for the characters they are intended to be.

These sets are different in design and story. They offer a far more nuanced insight into everyday life and tradition in a way that the likes of CITY and Friends could only dream of, building at a higher level and to a higher budget. It means that the sets come in a little more expensive, but for that extra money are sets that compare very well and will maintain a lasting appeal where cheaper sets perhaps feel more disposable.

80108 Lunar New Year Traditions is perhaps the finest example of how the LEGO Group embraces the challenge of capturing cultural identity in a fun, educational and interactive way, where getting it wrong could look exploitative.

This is a set packed with story, character and so many details and it just works, for those with an affinity to the subject matter and for those with just a keen eye for good LEGO.

It can take a couple of hours to put 80108 Lunar New Year Traditions together, given that this is a surprisingly detailed and intricate build in places. It is a set heavily marketed by the LEGO Group to build in groups or as a family, and the bags of bricks and instruction booklets for each of the six vignettes are separate, as a result.

How many pieces are in LEGO Chinese New Year 80108 Lunar New Year Traditions?

There are 1,066 pieces included in 80108 Lunar New Year Traditions, along with a staggering 12 minifigures.

When combined into a circular display, 80108 Lunar New Year Traditions measures 24cm in diameter and just under 10cm in height. Any display with the vignettes stacked three-high measures 26cm tall.

As one half of Tiro Media Ltd, I mix a passion for print and digital media production with a deep love of LEGO and can often be found on these pages eulogising about LEGO Batman, digging deeper into the LEGO Group’s inner workings, or just complaining about the price of the latest LEGO Star Wars set. Make a great impression when you meet me in person by praising EXO-FORCE as the greatest LEGO theme of all time. Follow me on Twitter @RobPaton or drop me an email at [email protected]tics.com.