LEGO Architecture continued to expand beyond the theme’s original basis, with the iconic New York landmark back in the brick

A gift from the people from France to the USA, the Statue of Liberty was dedicated in 1886 and standing on Liberty Island has greeted travellers entering New York Harbour ever since. The statue has become an iconic symbol of freedom worldwide, featuring on everything from t-shirts to postcards and all things in-between – she even made it into the Collectible Minifigures in Series 6. The LEGO Group has previously produced the landmark as 3450 Statue of Liberty, but could this latest set – the largest Architecture model yet – be the best version of Lady Liberty in bricks?

As with all Architecture sets, the build doesn’t begin until after reading the history of the actual landmark – unless you skip that part of the instructions and move straight onto the build (hands up, we’ve all done it). It is probably the quickest history lesson you’ll ever have and easier to follow than a messy Wikipedia page, adding to your knowledge of the model, and the quick facts every half-dozen pages might come in handy at a local quiz night.

About half of the height of 21042 Statue of Liberty is dedicated to the pedestal upon which the statue stands. Although the same from every side, it’s never repetitive to build because of the fascinating techniques used to recreate the detail – of which there is a huge amount. It could have looked quite plain, but using masonry bricks and grille-tiles adds different textures, and there is some dark grey to break up the otherwise monotonous tan. Perhaps the most tedious part of building the pedestal are the exterior columns, made by stacking 1×1 plates and studs which have to be perfectly aligned to fit. After doing this eight times your fingers might just want a holiday. 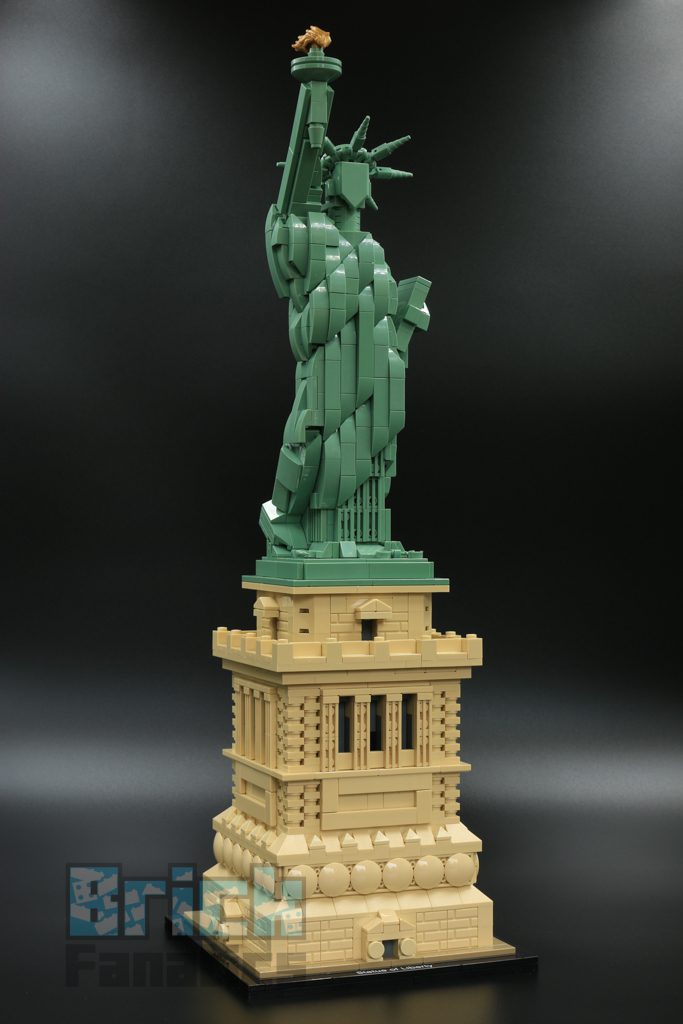 Whilst creating the detailed exterior, many bricks also go into making a strong interior, so by the time it’s finished the pedestal is surprisingly substantial. Even if you dropped it by mistake, it’s unlikely that anything would fall apart –do not try that at home though, as it’s probably not worth the risk.

Once you have recovered from the painstaking process of the pedestal, then the Statue of Liberty herself is built by constructing a column of studded bricks onto which sand green plates and tiles attach. This part of the build takes some time as there are a lot of tiles that could easily be missed and aligning all the parts of the dress is quite fiddly. It is a perfectionist’s nightmare, as even when some pieces appear aligned, others are not and infinite time could be spent tweaking the position of the pieces. Sand green is the perfect colour for Lady Liberty (chemistry buffs will know that the statue is green because of oxidised copper). It’s not a common shade in LEGO sets, so most of the pieces used to build the statue appear in this colour for the first time – such as sand green handcuffs.

The statue is based on Libertas, the Roman goddess of freedom, so there is a lot of significance that has not gone unnoticed by the LEGO designers. Her crown has seven spikes, recreated using Unikitty horn pieces, which represent the world’s seven continents. At her feet are the handcuff pieces that signify broken chains and by hinging her right leg it is posed to move away from oppression. In real life, the tablet the statue holds has the inscription “July IV MDCCLXXVI” (that’s July 4, 1776 in case your Roman Numerals do not stretch that high) and it’s a shame that the bricks were not printed to include this important detail. In her other hand, Lady Liberty holds her famous torch and in a clever repurposing of an element, the flame is actually a minifigure hair-piece in pearl gold.

What seems to divide fan opinion is the face for 21042 Statue of Liberty. Due to the scale, the designers have compromised and simply given the statue a plain face using the shield piece introduced in NEXO KNIGHTS (which seems to be finding almost as many uses as Battle Droid arms). Perhaps this was done because any features in LEGO bricks tend to appear rather cartoonish, which could be inappropriate for the Statue of Liberty. Some fans may have preferred a suggestion of the main facial details like a pair of eyes and a mouth. The choice made here works, but it is understandable that some fans would have preferred something more detailed.

On display 21042 Statue of Liberty is a fantastic replica that dwarfs other Architecture models – and would make a great conversation starter for a coffee table (or a not so subtle hint that you dream of visiting the Big Apple). It will be interesting to see if the success of Lady Liberty will light the way for future Architecture sets of a similar size and style, with plenty of marvels like the Great Sphinx of Giza or Mount Rushmore ripe for this kind of treatment. This set comes highly recommended for fans of this long running theme.

21042 Statue of Liberty is available now at shop.LEGO.com. You can help support Brick Fanatics’ work by using our affiliate links.