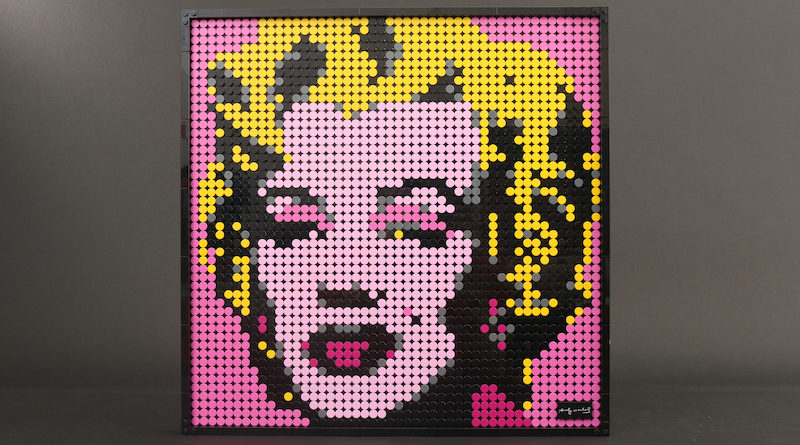 Nowhere is LEGO Art’s potential to offer a new experience and appeal to a new audience more apparent than in 31197 Andy Warhol’s Marilyn Monroe. Based on a piece of art that itself is derived from a photograph and purposefully reproduced over and over again in any number of colour combinations, this is a LEGO set that perfectly embodies aspects of the artist’s ideals and even goes as far as to expand upon them.

31197 Andy Warhol’s Marilyn Monroe is only one of four different sets available in the LEGO Art range (with more on the way), but from its reveal it has held a different identity to the others. Where 31199 Marvel Studios Iron Man, 31200 Star Wars The Sith and the upcoming 31201 Harry Potter Hogwarts Crests and 31202 Disney’s Mickey Mouse are all based on pop culture icons, and 31198 The Beatles based on a famous set of photographs of the band, 31197 Andy Warhol’s Marilyn Monroe is currently the only LEGO Art set directly based on a piece of art. It may similarly feature a famous icon from popular culture, but as its set name indicates, it’s based on a piece of art by Andy Warhol, rather than an image of the late famous actress Marilyn Monroe.

This more direct connection to art makes it an intriguing ‘LEGO Art’ set, and, with consideration to the particular piece of art in question and the artist’s motivations and working process, 31197 Andy Warhol’s Marilyn Monroe – purposefully or not – is even thematically linked to its source material.

We explored the build process to these LEGO Art sets earlier this year in our review of 31199 Marvel Studios Iron Man and it is very much the same process applied in construction of 31197 Andy Warhol’s Marilyn Monroe. The main image is divided into a grid of nine squares and each double page of instructions sees you follow an almost paint-by-numbers approach to applying 1×1 rounded tiles (they were 1×1 rounded plates in the Iron Man set). Finish each square, put them together and build the frame to complete the larger final image. During the process you can listen to a complementary podcast discussing the subject matter your chosen LEGO Art piece is based on.

Before any of that, though, you begin at the hardest point, with the choice of – in this case – four images of the subject to build between. This is where 31197 does differ from the other three LEGO Art sets it was released alongside and begins to venture into this different identity. Where the other three sets each offer clear choices between different images to build, 31197 makes available just different colour combinations of the same image. Each option effectively reproduces the iconic, mass-reproduced piece of pop art from the 1960s to a unique set of vivid colours reflective of some of the combinations Andy Warhol produced at the time.

At a basic level this choice between colour combinations makes for a harder decision than with any of the other LEGO Art sets. And, whilst it is a decision that serves simply as a function of practical thinking and creativity from the LEGO Group (to keep the costs down and the individual expressionism up), it also becomes, in this particular case, a masterstroke that perfectly symbolises the reference material. To understand why, we need to understand the original art piece and its artist.

Andy Warhol defined himself as an industrial artist, with the production of his work referred to as ‘a process of duplication’, based around the concept of creating art through expanding upon other people’s work. His work as part of the visual art movement of the 1960s involved the use of various media, but he is best known for his silkscreen paintings.

Described in the below video, Warhol’s approach to silkscreen painting is best simplified as the use of loosely painted-over stencils of photographs or images to create the ‘print’ that is then painted over in a mix of colour and photographic emulsion to create the final effect.

As a creative process, it allows for the reproduction of any image, to any level of detail (depending on the stencil produced), and is open to any colour combination. For these reasons, it was embraced by Warhol, someone who so strongly believed of industrialisation and, through a desire for emotionless, was even famously quoted as saying that he wished he could be a machine. It was a sentiment that drew him to silkscreening and, when mixed with his exploration of the relationship between artistic expression, advertising and the burgeoning celebrity culture of the 1960s, it saw Warhol go on to produce the work he’d become most famous for.

Warhol began silkscreen painting in 1962 and created two of his most recognisable pieces that year – Campbell’s Soup Cans and Marilyn Diptych. The latter is made up of 50 reproductions of a single image of Marilyn Monroe, and was produced shortly after the actress’s death, with Warhol reflecting the actress’s career and subsequent death by painting the left 25 images in heavily pigmented colour, and leaving the right 25 images in black and white.

Marilyn Diptych was then followed up five years later with a portfolio of 10 reproductions of the same image of the late actress, cut to a closer crop and each printed in vibrant colours. Her lips are painted dark red in many of the prints, just as yellow is featured in her hair in most versions. The bright colours are seen to represent Marilyn’s personality, whilst the contrast of the dark colours is thought to signify her passing. This 1967 portfolio’s closer crop of the image is what 31197 Andy Warhol’s Marilyn Monroe is based on, whilst one of the untitled works from that portfolio is the basis for one of the four buildable options in the LEGO set.

Warhol’s delight in his Marilyns was split between the repetitive nature of the prints that reflected the machine-like process he was using (and the increasing emotionless felt towards the subject matter the more you saw the image), and the slight differences between each image that occurred after each roll and application of paint and emulsion. He eventually produced around 50 works based on this single image of Marilyn.

Warhol died in 1987 aged relatively young at 58, whilst his works have gone on to include some of the most expensive paintings ever sold. Through his use of colour, working process, choice of subject and own celebrity status, his Marilyn series of works helped define his Pop Art movement, and would be followed by similar works based around other, iconic celebrities.

Why is understanding Andy Warhol’s process and the artwork that the LEGO set is based on relevant to discussing 31197 Andy Warhol’s Marilyn Monroe, though? For how much a simple LEGO set sits as more than just a simple LEGO set. For the mass reproduction of the LEGO set; the fact it is released alongside pop culture icons from Star Wars, Iron Man and the most famous music group The Beatles; the wide range of colours of LEGO pieces available to build with and the option to reproduce the selected Marilyn image in any one of four combinations; for the uniform nature of LEGO building and the opportunity even within that for slight variance from piece to piece, model to model, 31197 perfectly symbolises and captures the very essence of Warhol’s art, in a uniform and universal way, open and available to the masses. If there’s a piece of art that perfectly transforms into LEGO for more than just ‘how accurate it looks in brick form’, Warhol’s Marilyn is that.

As we explored in our review of 31199 Marvel Studios Iron Man, LEGO Art represents a building experience incomparable to anything else produced by the LEGO Group and one that should not be overlooked, for those familiar to LEGO and those for whom this is something entirely new.

From the opening wave of releases of LEGO Art sets, though, 31197 Andy Warhol’s Marilyn Monroe holds a unique appeal for just how perfectly it represents not only a tribute to one of the most famous pieces of modern art, but offers almost a continuation of that art.

Whether or not the design team behind this went into that much depth in their consideration for choosing Andy Warhol’s Marilyn Monroe for LEGO Art is another matter. But, the beauty of LEGO Art is in how, when it is done well, it acts just as real art does, and can be left to the interpretation and individual experience of the person sat in front of it.

LEGO minifigures of Andy Warhol and Marilyn Monroe would have been perhaps too on-the-nose for inclusion in 31197 Andy Warhol’s Marilyn Monroe. The focus is on the piece of art being recreated, and any LEGO characters being included would detract from that.

Art is worth what someone is willing to pay for it, and coming in at £114.99, it is undeniable that the pieces available in the LEGO Art range are not going to be for everyone. However, for what they deliver as truly unique build experiences and, particularly in the case of 31197 Andy Warhol’s Marilyn Monroe, really special final builds, there’s a lot of value to be felt for anyone who does pick up a set. The budget starts to get out of hand, however, when you try to consider buying three more copies of 31197 Andy Warhol’s Marilyn Monroe, to create a completed quartet.

It should be worth noting, though, that authentic prints of any of Warhol’s Marilyns would certainly set you back a fair amount more, and they’d arrive ‘pre-built’, so to speak…

Andy Warhol’s Marilyn Monroe prints are a symbol of mass-production and pop culture. They reflect the complex identity of celebrity and our relationship to it. Through use of colour, repetition of image and selection of subject, Warhol’s Marilyns capture so much with relative simplicity. With the LEGO Group labelling this theme ‘LEGO Art’, the immediate expectation is that for more than the physical nature of the LEGO sets in question, what you build can truly be called LEGO Art.

For mass appeal so as to make LEGO Art work commercially, screenshot stars like Iron Man and The Star Wars Sith need to be included. For a true extension of art into the brick world, though, for LEGO Art’s strongest work, look no further than 31197 Andy Warhol’s Marilyn Monroe. A true work of art captured skilfully and thoughtfully in LEGO form, this is the set that best lives up to the name ‘LEGO Art’.

However long LEGO Art runs as a theme, this is its standout creation so far and is such a unique set for simply what it is more than for any other consideration a LEGO set may usually go through. 31197 Andy Warhol’s Marilyn Monroe stands as one for collectors, art enthusiasts and LEGO fans alike.

Find your inner artist and support the work that Brick Fanatics does by purchasing your LEGO Art through one of our affiliate links.