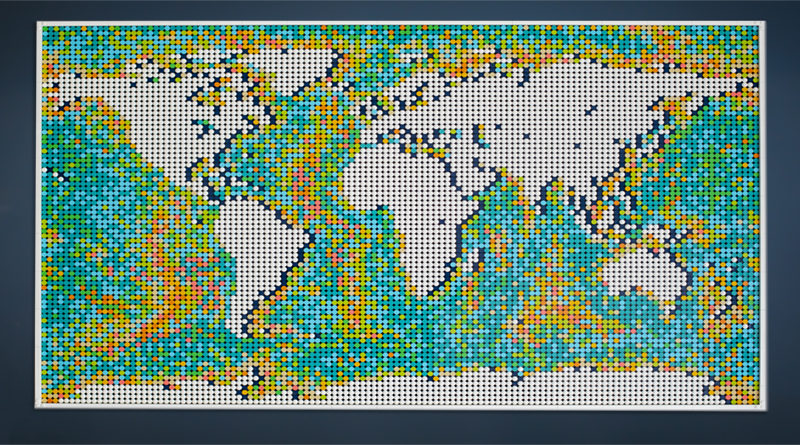 The LEGO Group takes its ‘Rebuild the World’ campaign very literally in 31203 World Map, a LEGO Art mosaic that sets a new record for the most pieces in a single model.

When it comes to huge sets, the LEGO Group has an impressive back catalogue: 10256 Taj Mahal, 75192 Millennium Falcon and most recently 10276 Colosseum all boast incredibly impressive part counts, but despite their size the LEGO experience remains mostly the same. 31203 World Map, on the other hand, not only smashes the piece count of the aforementioned sets – containing a staggering 11,695 elements – but comes together quite unlike any LEGO set that’s out there (bar the other LEGO Art sets, of course).

When rumours of a LEGO world map first appeared online, expectations were of something bright, colourful and fun, very much in keeping with the brand – but what we’ve actually got feels far more grown-up and stylised. It resembles a satellite image, with the landmass represented by white 1×1 round plates and the set’s most varied colours coming from the seas and oceans. It’s a lot more accurate than what was first imagined – but will it still prove to be just as fun and striking once finished?

For a set of this size, you may be surprised to hear there are only 14 bags containing all of the necessary parts to complete the artwork. But don’t let that fool you into thinking this isn’t a gargantuan undertaking. Within each bag are hundreds of 1×1 round tiles and plates of various colours. There’s another nine large bags needed for the brick-built frame and a whopping 40 16×16 plates that make up the LEGO canvas. To put that into context, the smaller LEGO Art sets use just nine of those same plates. If you’re not feeling daunted by this set, you should be.

The first task presented is to choose which of the three configurations you want the world map to be. Being the internationally-loved brand that LEGO is, prospective builders could be coming from Europe, North America or even down under in Australia. To cater for its global audience the designers have allowed the map to be configured with either North and South America, Europe or Asia and Australia in the centre. Thankfully, the choice of which one to display is made a lot easier as the continents are built in separate sections, which can then be configured whichever way you like once complete.

To further add to the personalisation options offered by the set, map ‘pins’ (1×2 cones with 1×1 round tiles on top) are included to place into any countries or geographical areas that hold a special place in your heart, or even ‘mean the world to you’. You could even use them to ‘tick off’ countries that you’ve visited. It’s a really creative and welcome addition.

Staring at the gigantic box and surrounding yourself with the myriad pieces there is no denying it feels like you’re about to embark on an epic undertaking, but it’s introduced in the opening sections of the manual in such a fantastic way that it leaves you very excited for what’s to come. It’s obvious a lot of love has been poured into its design and the overall presentation of the set – the hope is that it translates into the build experience too.

Just like previous LEGO Art sets, 31203 World Map is more akin to a paint-by-numbers experience (or in this case, ‘brick-by-numbers’). Builders are tasked with matching the coloured numbers in each step to the corresponding piece on the build itself. The major difference here is that where previous Art sets have stuck to all plates or all tiles, the world map uses a mix of both – more on that later.

To help keep track of the various colours, and to help differentiate between the subtle shades, a buildable colour palette is included, consisting of two printed tiles with 1-8 and 9-16, which are placed on a 2×16 plate. Each 1×1 tile or plate is then added to a 16×16 plate, which in turn connect to one another to form the set’s canvas. It’s very, very different, but brings with it an even more mindful experience than a regular set offers – this is LEGO zen at its absolute finest.

A specially-commissioned soundtrack is also included to listen to while constructing the set, featuring travel stories from a wide array of contributors, including Torbjørn C. Pedersen, the first person in history to visit every country in one unbroken journey without flying. It’s an amazing achievement, but just think about all the air miles he missed out on.

The continents – which are surprisingly recognisable right from the early stages of the build – are made up entirely of white 1×1 round plates. The use of plates rather than flat tiles elevates the continents slightly off the map’s canvas when compared to the oceans, and the 3D effect is further enhanced by the use of dark blue tiles that create a shadow around each landmass. It’s a subtle but very clever technique.

The oceans themselves feature a variety of different blues, greens, pinks and even tans, which adds interest to the final artwork as well as making the process much more enjoyable that if it were just a collection of blues.

Building up each 16×16 plate is a very meditative experience, and once you get a rhythm going it actually becomes quite relaxing. However, this set is on such a large scale that it probably wasn’t intended to be attempted in one go. It’s perhaps more enjoyable to dip in and out, rather like a large jigsaw puzzle, as opposed to a conventional LEGO set that’s tackled in one or two sittings.

Once you’ve got to grips with the unique ‘brick-by-numbers’ technique, nothing changes during the building experience until the latter stages, when the brick-built frame is assembled. This shouldn’t be taken as a criticism, though – there’s something strangely addictive about the process that will keep you coming back for more. It’s incredibly satisfying slowly building up a patchwork of colours, only to slot it into place and watch it come to life in a bigger picture.

Towards the latter stages of the build there are a few moments when the process feels a bit of a chore: most of Russia, China and parts of Asia are mainly just 16×16 plates covered in white. They obviously don’t require as much concentration, and these sections are nowhere near as enjoyable as the more colourful areas of the map. But it’s a very minor gripe, as overall 31203 World Map is a colossal experience in every way. From the huge box to the massive part count, everything about this is on a gigantic scale.

Even the frame is immense. It begins with attaching 52 individual 1×2 bricks with technic pins around the edges. To these a vast quantity of bricks, plates and tiles of varying size are then slowly added, until the entire artwork is surrounded by a white tiled frame. It finishes off the artwork beautifully.

Once completed, you’re left with an absolutely stunning rendition of the world map that’s stylised and accurate at the same time. It looks monstrous but incredibly attractive when displayed, and the sense of accomplishment once finished stands alone among not only regular LEGO sets, but even the wider LEGO Art portfolio.

31203 World Map contains 11,695 parts, but no minifigures. However, in order to give an idea of the finished artwork’s scale, we’ve placed The Hiker from 71013 Series 16 of the Collectible Minifigures on to the map in the pictures below.

31203 World Map is just over four times as large as a standard LEGO Art set, so it’s safe to assume the price will be four times as much too, but that simply isn’t the case. In fact, it retails for a little over double the cost of a regular Art set, which not only feels like a fantastic deal but also places the set into a much more accessible and affordable price range.

The LEGO Group is sometimes criticised for its pricing, but here it almost feels like the company has undervalued its product. Take into consideration that this has the potential to be discounted by other retailers at some point, and it makes it very hard not to highly recommend this set.

Much like the other sets in the LEGO Art range, 31203 World Map definitely won’t be everyone’s cup of tea. The build is completely different to what many fans will be used to, and in that respect it doesn’t really feel like a traditional LEGO set at all. However, the process is incredibly mindful and relaxing and the sense of satisfaction once the artwork is complete makes for a very tempting experience. The price also helps to make this a very attractive purchase. Coming in four times larger than a regular LEGO Art set at only double the price feels like an absolute bargain.

The final product is simply remarkable and is the real selling point to the set. The 3D effect looks wonderful from almost any angle; it’s such a large piece of artwork that it will surely be a dramatic addition to whichever part of the house it’s hung; and it’s a guaranteed talking point. The fact it can be reconfigured and personalised gives the set the potential to be completely unique to each individual too. If you want a large and visually stunning piece of artwork that’s entirely made of LEGO, then this will be one trip around the world you certainly will not regret.

31203 World Map is epic in every sense of the word, and the build is no different. Prepare to set aside at least 16 hours to complete the World Map, if not more. We recommend spreading the build out over a number of days to prevent boredom creeping in.

31203 World Map is the largest set the LEGO Group has ever released by piece count, with a whopping 11,695 elements inside the box.

31203 World Map measures an impressive 104cm wide and 65cm high when complete. That’s much larger than the standard 40cmx40cm dimensions of a regular LEGO Art set.