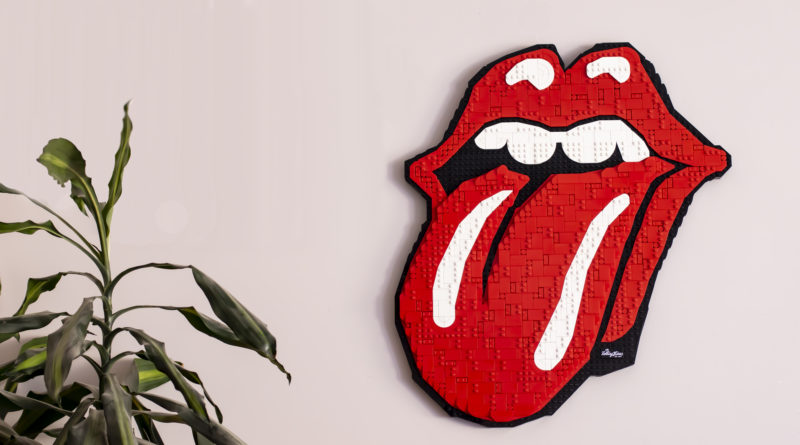 LEGO Art 31206 The Rolling Stones is a true work of art, pushing the boundaries of what a modern LEGO set can be and delivering one of the most visually striking models to date.

The Rolling Stones are a band like no other. Formed in 1962 and still going strong some 60 years later, as far as longevity within the music industry goes, their achievements will most likely never be repeated. Their influence can still be felt throughout music today and their iconic lips and tongue logo is probably just as well-known as they are.

Inspired by Indian music and culture, the logo was designed by British graphic artist John Pasche in 1970. The logo first appeared on the seminal Rolling Stones album Sticky Fingers, and has been synonymous with the band ever since.

A few years back, even the thought of an official LEGO set recreating the famous logo would have been out of the question – but thanks to the LEGO Art theme, the LEGO Group has been able to diversify its portfolio and offer exciting and unique models that redefine what we have come to expect from a LEGO set. 31206 The Rolling Stones takes that one step further by offering something wondrously unique, even within a theme that is already incredibly different to anything else on the market.

Out is the mosaic style that we’ve seen in sets such as 31203 World Map and the newly-released 31205 Jim Lee Batman Collection, and in its place is a striking, stylish, three-dimensional, sculpture-like relief. It’s sizeable, it’s impressive and above all it’s incredibly artistic.

Nothing like this has been done in LEGO before – not officially, anyway – and it shows great confidence in the growing Art theme to be able to experiment with other forms of art, not just the traditional mosaic designs. But as this model is intended as both a LEGO set and an artistic display piece, can it succeed at two completely separate aims simultaneously?

No other theme suits the black LEGO for Adults packaging more than LEGO Art. The box for this set feels desirable and stylish, while the manual includes a detailed introduction to the model, the design process, the history of the lips logo and of course The Rolling Stones themselves, all of which excites you for the build to come.

There’s also a soundtrack that has been specially designed to accompany the build, but sadly it wasn’t available at the time of writing so we can’t comment on its quality or what it adds to the build experience. Instead we put on our favourite Rolling Stones playlist and got stuck in.

A total of 1,998 pieces are required to complete the model – a number that could be seen as a nod to the band’s famous Bridges to Babylon Tour, which saw them take the stage with another music legend Bob Dylan, or it could just be a coincidence. Either way, the pieces are spread across 23 bags numbered one through 12. Three bags containing extra Technic pieces and larger plates, and five loose black 16×16 Technic bricks, a mainstay of the Art theme, are also included.

Right from the start, it’s clear this is nothing like any other Art set. Rather than building a squared-off canvas, this time Technic elements are added to the edges of the 16×16 bricks, creating a staggered framework. Whereas previous LEGO Art sets use one single method, 31206 The Rolling Stones uses a variety of techniques, keeping the build fresh and exciting at almost every stage.

Rather than relying on round 1×1 plates or tiles to build up the image in a mosaic pattern, in this set various tiles, wedge plates, regular plates, and a variety of rounded elements are all put to use to build up the detail and design of the artwork.

The early stages successfully invoke the feeling that you are simultaneously creating both a LEGO model and a piece of art. The colour scheme is as striking, classy and stylish as any piece of pop art and the LEGO parts used to create the shaping are absolutely incredible – a real design masterclass. It also has the added benefit of being an utter joy to put together. The sharp angles and curved shaping is very smart and very sleek.

The liberal spread of 1×2 ingots and 1×1 round tiles create interesting textures, breaking up the large quantities of 2×3 tiles that are dotted across the top half. The way the various wedge plates fit together is incredibly satisfying, almost creating a jigsaw puzzle approach to the build.

The curves at the top of the model are achieved using black wedge plates with red wedge plates and red curved tiles placed above. This layered technique gives the model a three-dimensional appearance, which is further enhanced by the use of similar white pieces on the top layer. In some ways it feels like a hybrid between a LEGO Art set and a LEGO Brick Sketches model – just on a much, much bigger scale.

There are some LEGO sets where it’s easy to see the process that went into the design. Sometimes it’s a build or set that you may have even attempted yourself, or at least could have a good go at replicating. With 31206 The Rolling Stones, it really is quite astonishing just how this has come together. Looking at the reverse side and seeing the way the various Technic bars, bricks and frames interlock with one another feels more like looking at engineering rather than a LEGO build.

The detailing on the actual model itself is just as complex, intricate and so smartly designed that at points you can’t help but shake your head in awe at the design that’s gone into the set. The mosaic LEGO Art sets are impressive, but it’s clear how they have been designed. This set feels like it’s on a completely different level, and is such an impressive and artistic approach to LEGO building that it’s a real joy to construct.

The model does successfully tie itself into the rest of the Art theme by offering two alternative builds, one of which adopts the mosaic ‘brick by numbers’ approach that the other sets exhibit. It’s a much smaller section, with just six different colours (as opposed to, say, the 12 used in 31200 Star Wars The Sith) but it’s still just as mindful a process. This technique feels completely unique when compared to other building styles, but it is nonetheless a smart way of using the humble brick, and further demonstrates that LEGO really can be considered a valid artistic medium.

To celebrate the band’s 60th anniversary, the mosaic creates a giant number ‘60’ outlined by the tongue. You can either leave the model like this or continue building the full lips logo as showcased on the front of the box. Each look is distinctive, but the final model is probably the more recognisable and well-known logo. Finishing the model off is a printed 2×4 Rolling Stones logo tile.

From start to finish the build process is just a wonderful experience. What is particularly inspiring about this set, and indeed the LEGO Art theme as a whole, is how well it successfully captures the feeling of creating an actual piece of art, regardless of how much artistic talent you may have. The only downside is that you have no control over the colour scheme – but if you don’t like it, you can always Paint it Black. (Sorry, we couldn’t resist that one.)

The finished model is stunning and genuinely looks like an impressive work of art. Thanks to the relief-style design, the piece looks like it is literally bursting out from the wall, and it’s also a lot larger than the official images on the box art suggest – making for stunning, eye-catching artwork. It’s hard to find any faults with the final design – it really is that good both as a LEGO model and a piece of art.

Having Mick Jagger, Keith Richards, Ronnie Wood and Charlie Watts immortalised as minifigures would make some fans’ dreams come true, but LEGO Art sets have never included minifigures before – and 31206 The Rolling Stones stays true to form, placing its sole focus on the impressive lips and tongue model.

When considering the price of LEGO Art sets, it’s perhaps a better idea to compare them to similar artworks and sculptures rather than other LEGO sets. They are, after all, designed primarily as pieces of art.

Looking at similar lips and tongue hanging wall pieces that aren’t LEGO, it is fair to say that 31206 The Rolling Stones not only compares very favourably in price, often coming in cheaper, but also feels like you are getting more bang for your buck when it comes to the size of the model too. Similarly-sized sculptures would be a lot more expensive, and perhaps not quite as unique a piece.

When you also take into account the added bonus of the build experience, the multiple display options offered by the set, and the fact there are nearly 2,000 pieces required to build the model, the price suddenly becomes an even better deal. It perhaps doesn’t stack up as favourably next to other LEGO Art sets from a price-per-piece perspective, but you’re getting a much bigger variety of pieces here – and a more involved build, too.

Mick Jagger once famously sang: “You can’t always get what you want, but if you try sometimes you just might find you get what you need,” and if you are a Rolling Stones fan then you most certainly need 31206 The Rolling Stones. But taking that one step further, if you are a music lover, an art lover or a LEGO lover looking for an incredibly stylish model to hang as a centrepiece in your favourite room, then this is it.

As a LEGO model it is simply gorgeous. It’s eye-catching, striking, colourful, fun – everything that made the famous lips logo so popular in the first place – and as a work of art it’s all those things and more. It’s a truly unique model within the LEGO portfolio, but also shows what can be achieved within the Art theme itself.

It’s fitting that the first LEGO model to really throw open the doors to what is possible as an official LEGO Art set just so happens to be one based on a band whose music, culture and personalities have been pushing boundaries for over six decades. Just like the band have done within the music world, let’s hope the influence of 31206 The Rolling Stones will be felt for years to come.

How long does it take to build LEGO Art 31206 The Rolling Stones?

31206 The Rolling Stones is a large set, but doesn’t actually take too long to put together. Experienced builders will probably complete this within around three to four hours. However, it’s such an enjoyable process that it’s worth taking your time.

How many pieces are in LEGO Art 31206 The Rolling Stones?

31206 The Rolling Stones contains 1,998 pieces. Whether that’s a nod to the famous ‘98 Bridges to Babylon tour is unknown, but it’s an impressive piece count nonetheless. About two thirds of the pieces are used in the alternative design.

31206 The Rolling Stones is much bigger than the box first suggests, coming in at 57cm tall and 47cm wide. It’s only a few plates thick, too – perfect for hanging on your wall.

How much does LEGO Art 31206 The Rolling Stones cost?