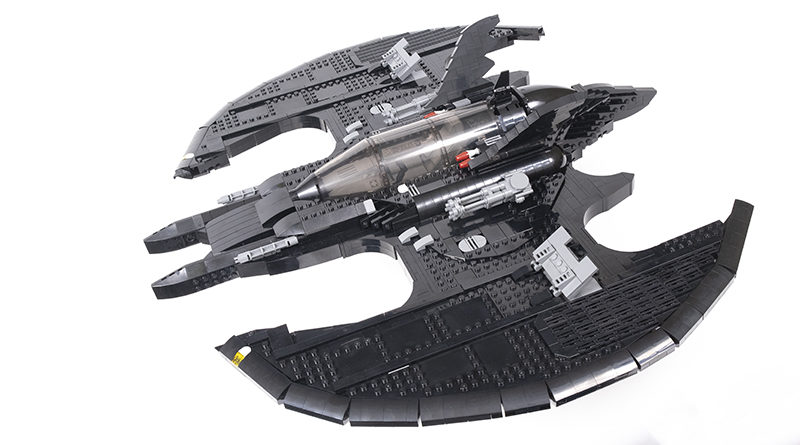 Where does he get those wonderful toys? LEGO.com, of course. Batman’s latest wonderful toy is 76161 1989 Batwing, an incredibly faithful replica of the vehicle as seen in Tim Burton’s 1989 Batman film. The 2,363 piece set is available now at the official LEGO online shop for VIPs and will be available to everyone else on November 1.

We’ve already taken an in-depth look at the Batwing in all its splendour, but for serious shoppers and collectors (or Bat-fans in a rush), here are the five most important things to know about 76161 1989 Batwing…

1. It looks incredible on display

Sure, everyone loves the design of the Batmobile, making 76139 1989 Batmobile a no-brainer. But while the Batwing is cool, is it 2,000+ piece LEGO set worthy? Yes, yes it is. Some LEGO sets look even more impressive in person – and 76161 1989 Batwing fits into that category.

It’s partly how well the model captures the shaping of the movie prop, partly how well it adds detail and texture to make it feel authentic, but most of all down to the scale. By making the model a massive 58cm wide, it is large enough to have an imposing feel worthy of Batman.

2. Building it goes by really quickly

Some of the best, most beautiful LEGO models are a chore to put together. The repetition is tiresome, the build’s too simple or the build’s frustratingly complex. 76161 1989 Batwing is not in either category – it hits the sweet spot, pinning lots of big elements together quickly to get a base to start from, then mixing up the build methods frequently enough to keep it engaging. It’s an absolute joy to build, with the only frustration being getting fingerprints on those shiny black tiles.

3. That goon is named Lawrence

Who knew that the boombox guy’s name is Lawrence? Most memorable from the scene in which the Joker messes up the art gallery, Lawrence provides the tunes as Jack Napier gets creative. The minifigure perfectly replicates the distinctive purple jackets from the film.

It’s an impressive minifigure line-up, with Batman just as good as he was when this specific design was introduced in last year’s 76139 1989 Batmobile. The Joker though, in his monochromatic mime outfit, is the highlight thanks to some very impressive detailing.

4. It can hang from the wall

No, we don’t have room for this set either. Anyone who has treated themselves to two or three of this year’s larger LEGO releases will be seriously struggling for space, unless they live in Wayne Manor. Thankfully, there is a display option for this set that will allow the one flat space left in the house to remain clear.

Hidden beneath the seat is a special element that allows the model to hang on a screw fixing in the wall. Replacing the seat hides an unsightly screwhead and will leave the set looking suitably epic.

5. There are pink hearts in there

The LEGO design team have had some fun with this one. To get the curves right on the set, two pink heart pieces are used on the interior, as are two 2×2 Bat symbol tiles. It’s always fun when unusual bricks are tucked away in a model, but given all of the black bricks involved in this set, it’s an especially nice touch.

76161 1989 Batwing is available now at at LEGO.com. You can help support Brick Fanatics’ work by using our affiliate links.