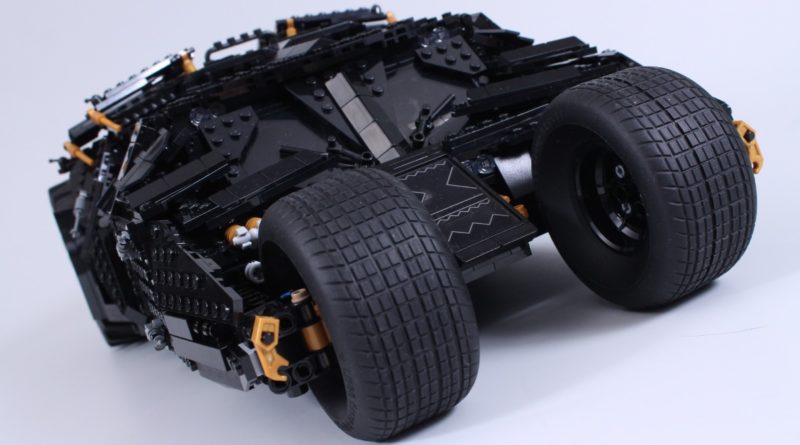 LEGO Batman 76240 Batmobile Tumbler is a 2021 set that’s still rooted squarely in the design language of 2014, crafting a narrative of missed opportunities for The Dark Knight.

76240 Batmobile Tumbler’s instruction manual opens with an admission from LEGO Super Heroes Creative Lead Jesper Nielsen: “We had to make some compromises… We tried to include steering, but that would have meant a more clunky profile, and that was a sacrifice we weren’t willing to make.”

Starting any build with an acknowledgement of what it doesn’t include feels precarious, but here it’s a pretty wise choice in setting expectations for anyone who’s built 76023 The Tumbler: in essence, this is basically the same set.

That’s really all you need to know if you still own a copy of the 2014 version (and aren’t interested in the new minifigures), but if this is your first rodeo with a supersized Bat-tank, is 76240 Batmobile Tumbler worth whipping out the Bat-credit card for?

The brand new rear tyres that spill out of the box (provided you, like us, tip the entire contents of any new LEGO set on to your building surface as a rite of passage) set the tone for 76240 Batmobile Tumbler straight away, because they’re absolutely massive – and therefore a strong indicator of just how much shelf space you’re going to need for this beast.

It won’t take long to get a full handle on its true size, either, because just like 76023 The Tumbler – a phrase that rears its head along almost every step of the journey here – 76240 Batmobile Tumbler is a very front-loaded build. There are four bags labelled ‘1’, but just one apiece for bags numbered eight through 11.

That means the bulk of the chassis is assembled through those very early stages, leaving the backend of the build to concentrate almost entirely on the panels attached at all angles – and via unusual connection methods – to capture the Tumbler’s sharp, brutal bodywork. It was a strange approach back in 2014, and it’s just as odd here. Not necessarily bad, but odd.

It’s also reflective of how 76240 Batmobile Tumbler comes together almost exactly like 76023 The Tumbler (see more on that process here). If you’ve built the original set, this new one is going to feel very familiar. Sure, the colours of some of the internal elements are different, and there are slight amendments to some of the specifics. But the broad strokes are all rooted in 2014.

And in delivering nearly the same vehicle as 76023 The Tumbler, this new version makes the same mistake as 10256 Taj Mahal: that set’s dated build techniques and aesthetic didn’t hold up when the LEGO Group brought it back to shelves in 2017, some nine years after its original release, and you might also expect something a little sturdier, a little more refined, and a little more enjoyable from a supersized Batmobile in 2021.

Instead, 76240 Batmobile Tumbler is a set of extremes: those sub-assemblies clipped on to its frame are mostly simple stacking of plates and bricks, but attaching them can be awkward; at times, it crosses the line from challenging to frustrating – particularly in the back wheels, which take some real perseverance and patience to align correctly.

The front two tyres don’t fare much better, with very little room to clip them into place at the point the instructions call for it. All of this happens at approximately the halfway point of the numbered bags (but not the halfway point of the build – remember how front-loaded it is), which has the unfortunate side-effect of souring the mood by the time you come to add those panels.

By the end, you might just be happy it’s over with, which is never a good feeling when you’ve just shelled out big bucks for a LEGO set. And if you do already own 76023 The Tumbler, it’s one you’ll likely have experienced twice now, because the differences between the two finished models really are minimal.

There’s a slight change to the shaping around the front side panels, the slopes at the very front are replaced by a (mercifully-printed) window, the cockpit windscreens are now trans-smoke instead of trans-clear, and… that’s pretty much it. Placing both Tumblers side-by-side makes for a very short and unsatisfying game of spot the difference – at least where the exterior is concerned. But the interior?

Yeah, the interior too. The instructions have already prepared you for the worst (no steering), but that 76240 Batmobile Tumbler is absolutely devoid of any functionality in 2021 feels incredibly jarring. As we mentioned in our review of 76023 The Tumbler, the way that the cockpit opens up on-screen feels tailor-made for a LEGO set of this size, but 76240 Batmobile Tumbler again simply drops in a couple of removable stacks of plates.

That means all the gadgetry and functionality – and by extension, much of the personality – of Batman’s Tumbler is still absent. But this newer model has 180 more pieces than its predecessor, so where have they gone? Well, mostly into the two display stands: one for the minifigures, and one for the Batmobile.

Let’s briefly touch on that minifigure stand, because it’s a strange one. It’s a straight match for the stands found in 76139 1989 Batmobile and 76161 1989 Batwing, but the gargoyles that brace either end feel like a much better fit for Tim Burton’s movies than Christopher Nolan’s. You can see the rationale – stylistically speaking, these Batmobiles all sit together cohesively – but it’s a weirdly forced link where something unique might have served a better purpose.

It’s fine, though, compared to the shoehorning in of the rotating stand for the Tumbler. One of 76240 Batmobile Tumbler’s main strengths is in how it captures the aggressive and intimidating profile of its source material – the instructions even refer to it as a ‘charging animal’ – but that’s all lost when popping it on the stand, which lifts up the front wheels in order to allow the vehicle to freely rotate. It’s a necessary compromise to achieve that dynamic display option, but looks so lame that it’s really not worth the effort.

Add to that the fact that the display plaque is almost entirely covered by the Batmobile when attached to the stand, as advised in the instructions, and you’ll probably end up just ditching the stand the moment you’ve built it. And for what’s ostensibly the only real addition to the Tumbler since the last go round, that’s a shame.

If there’s one area to heap praise on 76240 Batmobile Tumbler, it’s in its aesthetics: it absolutely looks the part, but then so too did its predecessor – and this is essentially the same build – so it’s not really bringing anything new to the table in that department.

Besides, how it looks is really only one piece of the puzzle, and the rest of them can’t quite match up: the journey to get to the finished model is lacklustre; the omission of any functionality is hugely disappointing; and much of the build is held in place through delicate (if inventive) connection points, making for a set you probably wouldn’t want to move around much anyway.

All of these are issues that weren’t in a supersized Batmobile two years ago, and probably shouldn’t still be around in 2021.

Just like 76023 The Tumbler ­– there’s that phrase again – 76240 Batmobile Tumbler includes two minifigures, Batman and Joker. And while they’re both highly-desirable representations of these characters, they also feel just as stuck in 2014 as the rest of the set.

As custom versions of these same minifigures have already shown us, a specialised cowl for Christian Bale’s Batman would go a long way to offering something properly distinct, and the LEGO Group has already come up with a custom cowl for Michael Keaton’s Caped Crusader in 76139 1989 Batmobile and 76161 1989 Batwing. Why couldn’t we get the same here, especially given the increased price tag?

By the same token, Joker’s hairpiece still doesn’t feel like a perfect fit for Heath Ledger’s wild, untamed mane. It’s got that classic LEGO DNA to it, but a unique hairpiece could have really transformed this minifigure, which otherwise genuinely does hit the mark with some sublime printing across its torso, arms and legs.

That said, offering an alternate Joker outfit to 76023 The Tumbler in itself feels strange – is the LEGO Group hoping to sell people on a second copy of what’s ostensibly the same set for that minifigure alone? (Don’t answer that.)

And one last qualm: why no Two-Face? With the introduction of Cillian Murphy’s Scarecrow in 76239 Batmobile Tumbler: Scarecrow Showdown, we’re slowly chipping away at the list of Nolan Bat-villains, with Aaron Eckhart’s Harvey Dent probably the biggest gap in the collection.

Given the links to the middle chapter of the Dark Knight trilogy (see that Joker minifigure), this was a perfect opportunity to bring us a new Two-Face. Instead, the minifigure line-up in 76240 Batmobile Tumbler is just another chapter in this set’s now firmly-established narrative of missed opportunities.

Price-per-piece is by no means the be-all and end-all of LEGO value, but for the sheer size and part density of that previous Batmobile – coupled with its superior build experience and functionality – this new one absolutely falters right out of the gate at £209.99 / $229.99 / €229.99.

Hope that, like many initially-direct-to-consumer sets lately, it quickly finds its way to third-party retailers – and then gets heavily discounted.

The introductory pages of 76240 Batmobile Tumbler’s instruction manual lay out the LEGO Group’s aims for the set: “How do we respect the original [76023 The Tumbler], but also ensure our finished result feels completely fresh?”

The answer was apparently to ‘tweak and adjust details’ until the design team could ‘stand back and see something that really stood apart’. What exactly they were looking at is a little more mysterious, because only intense study of the two Tumblers reveals the minute design changes in an updated vehicle that feels a long way from ‘fresh’.

Granted, there’s only so much you can do when you’re building the same vehicle at the same scale, using exactly the same source material. And just as the original did in 2014, it still looks very cool: all the sharp angles of its armoured exterior are captured skilfully; the new rear tyres feel more aggressive and menacing; and it really hones in on the Batmobile’s low, charging profile (when it’s not on its stand).

But it still winds up feeling like it could have been so much more, if only because the LEGO Super Heroes design team has already set the bar so high with 76139 1989 Batmobile and 76161 1989 Batwing. By contrast, 76240 Batmobile Tumbler feels stuck in 2014, unable or unwilling to evolve and grow with the LEGO Group’s increasingly sophisticated and ambitious builds.

And ambition is really what’s lacking here. If you missed out on the original 2014 set (and don’t mind a 2014 build experience, and 2014 minifigures), 76240 Batmobile Tumbler is worth a punt, if only to grow your collection of large-scale Batmobiles. But even then, the price makes it tricky to recommend to all but the most dedicated Bat-fans.

Support the work that Brick Fanatics does by purchasing your LEGO (including 76240 Batmobile Tumbler, if you’re still angling for it!) using our affiliate links. Thank you!

How long does it take to build LEGO Batman 76240 Batmobile Tumbler?

How many pieces are in LEGO Batman 76240 Batmobile Tumbler?

76240 Batmobile Tumbler contains 2,049 pieces, which is 180 more than 76023 The Tumbler. The majority of the extra bricks have gone into the display stands for the vehicle and the minifigures of Batman and Joker.

76240 Batmobile Tumbler measures 45cm long, 25cm wide and 16cm tall. That’s roughly the same dimensions as 76023 The Tumbler, give or take a centimetre in each dimension.

How much does LEGO Batman 76240 Batmobile Tumbler cost?