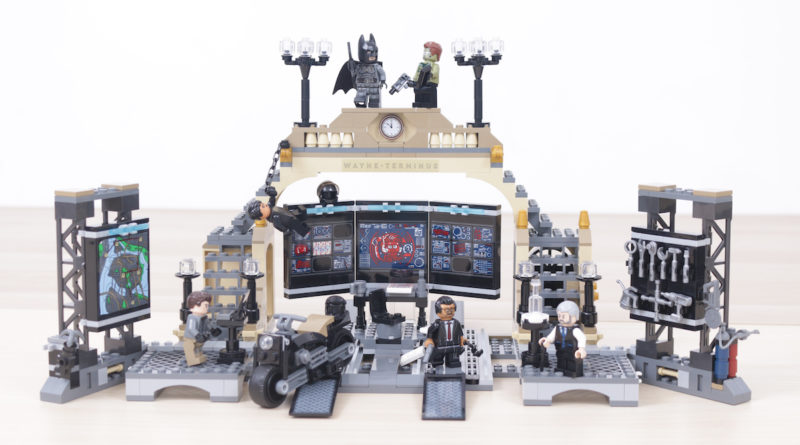 Watching The Batman will have you see 76183 Batcave: The Riddler Face-off in a new light, but still leave you frustrated with the main man’s minifigure.

Not always will taking in the resource material radically improve the impression of a LEGO set, particularly so with DC and Marvel Super Heroes sets. But such is the way that 76183 Batcave: The Riddler Face-off captures the essence of what is seen on screen in The Batman, there’s no other way to describe the (k)night and day reaction to this set.

On first impressions when 76183 Batcave: The Riddler Face-off released ahead of The Batman reaching cinemas, this was a dark, dull, random LEGO model of something more akin to an extension to the railway station in 75955 Hogwarts Express than any sort of Batcave, with a key staple of any Dark Knight dwelling – the screens – being turned into the set’s main play feature, which felt a little bit gimmicky.

…much like The Riddler’s plan in The Batman, it all ties together to create a bigger picture, once you see the film and realise what it is that the LEGO designers were looking at and just how nicely they’ve captured it all within 76183 Batcave: The Riddler Face-off.

From this point on there may be spoilers for The Batman – but to appreciate 76183 Batcave: The Riddler Face-off better, anyway, go see the film first.

Turns out, it is as it looks to be – an abandoned train station, in a location suggested as linked to Wayne Manor (or a version of where Bruce Wayne is living in the city). It’s dark, dingy and lacking much of a centre-point – it may not make for the most overtly interesting LEGO set, but it is one of the more authentic from the LEGO DC team in a while, with various aspects from the film location captured so very well in the form of 76183 Batcave: The Riddler Face-off.

That goes for some of the particular details to the model as well as the wider architecture. Indeed, the rather unusual, disjointed nature of the big screens, all red and with circular viewpoints, isn’t the most aesthetically-pleasing display we have seen in a LEGO Batcave, yet it perfectly reflects the technology and set-up as this Bruce Wayne in The Batman has at his disposal. It’s a tie-in you’ll really only appreciate fully once you see how Batman uses the screens.

The in-movie accuracy translates even into the gimmicky ‘clue’ stickered tiles included in the set – hold them under the red microscope to reveal a hidden message, in a way that is somewhat eerily in line with how Batman’s interactions with The Riddler play out on screen, even very much down to the red filter applied.

There’s not much else to the Batcave that we see on screen, beyond the central display area for the Batmobile (available in 76181 Batmobile: The Penguin Chase), the archway over the top in the style of an abandoned underground railway station and the occasional board of tools. That’s all included in 76183 Batcave: The Riddler Face-off, alongside some extra areas likely only featured in the background, such as the big map (which is more indicative of the map discovered later at The Riddler’s hideout).

Altogether there’s a lot more than initially expected in the set, and it makes for a much larger-than-expected, spacious all-round model, which includes a feature to integrate the central display unit into the tracks, where otherwise the Batmobile would sit. This centres the whole set into a more complete, thorough playset that doesn’t need the purchase of 76181 Batmobile: The Penguin Chase to improve it.

A good playset is matched by great minifigures, beyond Batman himself. Each has been designed with enough detail in the right points to more than accurately represent the respective characters they are based on. As an ensemble it’s probably the most dingy-looking collection of LEGO minifigures in a single LEGO Super Heroes set to date, but it’s equally one of the most accurate collections too. There’s more here than needs to be too – Riddler is a more accurate minifigure without the hairpiece.

Except, as we say, for Batman himself. It would be far better to create a face print for Robert Pattinson’s Bruce Wayne that, mask off, shows him as he appears in the film on more than one occasion, still wearing smeared eyeshadow – and that mask on gives a far more menacing expression than the generic one we get instead, where the alternate print includes that ridiculously out-of-place grin.

Likewise, while the print across Batman’s torso and legs is highly detailed and reflective of what is seen in the film, it is the wrong colour combination of black print on dark grey torso – inverting the colours would have gone some way to creating a more accurate minifigure, because the predominantly grey look only detracts.

Alongside that, the Bruce Wayne minifigure needs a new hairpiece to really come together, rather than reusing the Cedric Diggory one.

There’s more to say in frustration aimed at Batman, and a bit at the wrong hairpiece for Bruce Wayne, than about anything else on the other minifigures, because they are wonderfully and quite perfectly designed for how you would hope they would be.

There is a lot more to 76183 Batcave: The Riddler Face-off than you may initially be expecting, in terms of details, size, playability and genuine authenticity to the source material as seen in The Batman. With a selection of five great minifigures out of six included too, there’s a lot of LEGO here for the money, and little to poke holes in, beyond Batman’s minifigure design.

Importantly, while it doesn’t need 76181 Batmobile: The Penguin Chase to act and feel like a complete playset, the relatively low price for the Batcave keeps that option of an additional purchase more possible.

76183 Batcave: The Riddler Face-off is a far more authentic LEGO DC set than initially expected. It’s cleverly designed so as to create a large, open space, and then fill that with enough detail and points of interest, all the while ensuring the character and feel of the on-screen location as seen in The Batman can really breathe through the model.

That authenticity does mean it’s one of the more drab and unconventional LEGO Batcaves we have ever seen, but where we’re critical of 76181 Batmobile: The Penguin Chase for not providing enough detail and accuracy, 76183 Batcave: The Riddler Face-off can only be applauded. This may be a set to be overlooked by the wider audience, but perhaps it’s also a future classic waiting in the shadows, until it’s too late and the sequel rolls around…

(And yes, we’ve not mentioned the dramatically oversized bike. The rest of the set is so good that you too can pretend it doesn’t exist.)

Support the work that Brick Fanatics does by purchasing your LEGO Batman sets through one of our affiliate links.

How long does it take to build LEGO Batman 76183 Batcave: The Riddler Face-off?

It takes roughly 45 minutes to put together 76183 Batcave: The Riddler Face-off, across five sets of numbered bags.

How many pieces are in LEGO Batman 76183 Batcave: The Riddler Face-off?

There are 581 pieces included in 76183 Batcave: The Riddler Face-off, including six minifigures. Alfred Pennyworth, Bruce Wayne – Drifter, Lt. James Gordon and The Riddler are all exclusive to this set, too.

How big is LEGO Batman 76183 Batcave: The Riddler Face-off?

76183 Batcave: The Riddler Face-off measures around 41cm wide and comes in at 20cm tall. The central display area is where it is deepest, measuring 25cm long.

How much does LEGO Batman 76183 Batcave: The Riddler Face-off cost?