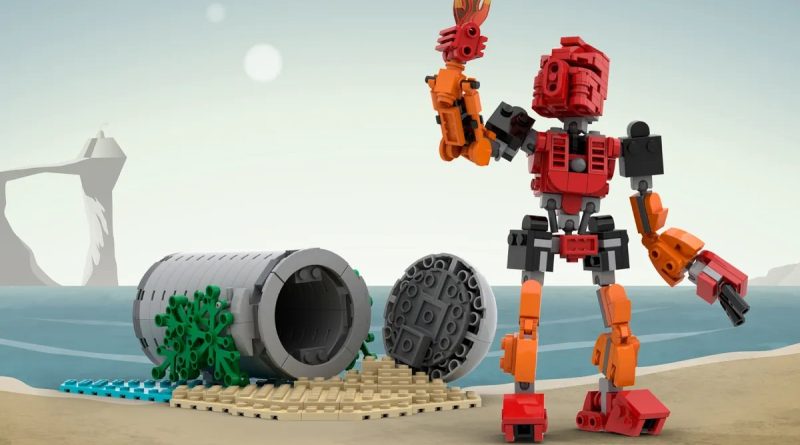 With rumours of a LEGO BIONICLE Tahu figure in 2023, the online community has already reimagined the constraction character using bricks.

Before the rumour of LEGO BIONICLE returning in 2023 surfaced, fans of the classic theme online have been experimenting with System elements to see how a modern LEGO BIONICLE figure could look. However, LEGO Marvel may also hold the answer.

While the reports have yet to be confirmed, the constraction system of pieces used for themes including BIONICLE and Hero Factory has been missing from the portfolio for some time and any return to the theme may have to make do without these bricks, or reintroduce them.

Thankfully, it’s entirely possible to make a convincing Toa out of traditional LEGO pieces in a variety of sizes. On LEGO Ideas, a few projects proposing a return to BIONICLE have been shared before, but never made it to a review round.

Wadapan’s design for Tahu is a good size without being too much bigger than the original figures. On the other end of the scale is knux400’s bigger build complete with a nameplate for a UCS-style plaque.

While these models stick to the original appearance of Tahu, Aaron Brick Designer opted to reinvent the figure’s look with a more complete design and use the smaller ball joint pieces as wadapan did too.

Since a Tahu model was included in 11021 90 Years of Play, cactisboy25 on Reddit was inspired by the unique face of that figure. Their creation expands on that official model with more movement and articulation while keeping that iconic expression.

These builds demonstrate that it is possible to depict a BIONICLE figure using System bricks and rumours suggest that we could see an official attempt at this in early 2023.

One thought on “LEGO BIONICLE without constraction is entirely possible”