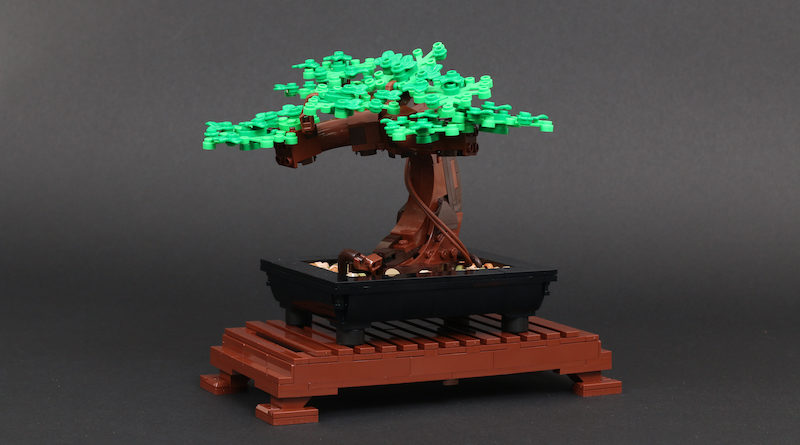 10281 Bonsai Tree could have been a gimmick, but instead is a LEGO Botanical Collection set that offers an engaging insight into a disciplined art form.

As an intricate art form that requires discipline, cultivation and attention to detail, there’s a great deal about Bonsai that translates perfectly into the world of adult LEGO building. For years fan designers have tried to capture the practice of growing small trees in containers in LEGO form and, with their move towards more adult-targeted sets, it was somewhat inevitable that the LEGO Group would also look to bring the discipline into the LEGO world.

That comes in the form of 10281 Bonsai Tree, a 2-in-1 model measuring 19cm high (including the stand), which – spread across 878 pieces – offers all the intricacy and contemplation you would want from a LEGO bonsai tree.

Bonsai is seen as an art form, where the artist/grower utilises cultivation techniques to grow a miniature version of a tree within a container or shallow tray. The practice involves seeding, growing, cutting and shaping to accepted shapes and proportions and to the particular design tastes of the artist.

It is a practice that requires patience, ingenuity and commitment, and its purpose for viewers is one of contemplation. Whilst miniature tree growing does mean that no two bonsai trees are the same, all bonsai trees generally follow a set of five aesthetic principles to their design:

With consideration to the design that has gone into creating 10281 Bonsai Tree, then, as well as the experience for the builder in putting together the set and the final display model that sits before you when complete, there is a great deal to admire and appreciate.

The LEGO set captures the look, style and overall aesthetic of a bonsai tree through a sharp, angular and detailed build. It’s not the longest build process, but it’s one that demands a keener eye for both the details that are included and for the otherwise quite-hard-to-see difference between the two shades of brown the tree is built from, and the two shades of green the primary option for leaves is put together from. If there’s one area to criticise, it’s that this is not a colour blind-friendly set of instructions.

That aside, though, there are a number of steps along the way to completing this model that will impress even the most experienced LEGO fan, partly for the simplicity of how such effective techniques have been realised.

In all, putting together 10281 Bonsai Tree is exactly as you’d hope it would be – involved and smart, requiring a little more focus than you’d otherwise have expected, too. With acknowledgement to the fan-designed bonsai trees of years before, the LEGO set also importantly overcomes a particular sticking point for many – the sheer fragility of balancing the leaves as widely as possible while maintaining the intended slim shaping. This is a solid model with branches that are adjustable (and removable), but firm in connection.

This is a set that also comes with the added bonus of a 2-in-1 feature, offering the parts and instructions to switch out the leaves for a cherry blossom-inspired pink variety. Either option looks great on display and switching between the two is very simple.

And display is where this set will sit, be that on a desk, bookshelf or coffee table. It’s a design that at once is both subtle and visually striking, capturing shaping both complex and traditional to bonsai, from the curvature of the main body, up through the twists of the branches and the wide spread of the leaves as they overhang the tray and stand. For how the model sits, it carries a lot of the same aesthetics that real bonsai trees do. The build may not have been anywhere near as involved or disciplined as what is required to grow a real bonsai tree, but the end result is just as impressive when in brick form.

For what 10281 Bonsai Tree is as a 1:1 scale build of a bonsai tree, it is not minifigure friendly. Put a minifigure next to it, though, and it’s the most intricately designed full-size tree at minifigure scale.

Not a minifigure set, though.

10281 Bonsai Tree is an authentic LEGO model produced out of an involved and smart build process. It captures as much of the essence of a real bonsai tree at a credible scale, with the flexibility of two designs to pick between and the far-less-involved care process than that of a real one.

A price of £44.99 / $49.99 / €49.99 for something relatively small may feel steep, but, for the intricacy, respect to the source material and amount of design expertise that has gone into this set, there’s more to enjoy and appreciate than on face value. 10281 Bonsai Tree may not be the first set you pick up in 2021, but it should be the first you make sure to not miss out on before it leaves shelves. It’s a one-of-a-kind LEGO set in many ways.

10281 Bonsai Tree is going to be popular with LEGO fans and with a wider adult audience. It captures the core values and principles of bonsai tree-growing within a LEGO set in a way that is at once accessible for new builders and interesting for seasoned fans.

This could so easily have been a gimmick of a set released to simply cash in on the interest around bonsai trees and to attract those who may only otherwise harbour a surface level of dedication and effort to what is an art form. Whilst 10281 Bonsai Tree does indeed offer a far more accessible, quick-fix experience of a discipline that otherwise should require a great amount of time and scrutiny, it is also a set that is reflective of a well-researched and respectful design process.

Every aspect of the build captures details that are to be enjoyed and appreciated in bonsai. You can’t grow your own LEGO, but you can use it in a smart, efficient and engaging way, and the LEGO Group demonstrates how in the most appropriate way with 10281 Bonsai Tree.

It’s a model that comes together intelligently to create a final, affecting piece that pays fine tribute to not only how a real bonsai tree looks, but as much as it can to the practice and art form that bonsai is too.

10281 Bonsai Tree is available at LEGO.com from January 1, 2021 – support the work that Brick Fanatics does by purchasing your LEGO through one of our affiliate links.