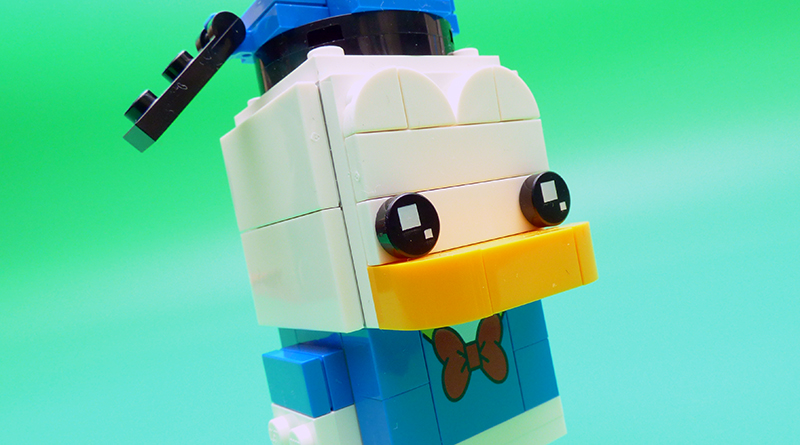 Donald Duck has a special place in the hearts of many Disney fans, thanks to his entirely relatable character traits. Spluttering, often unintelligible and always quick to anger, Donald frequently becomes frustrated with Mickey Mouse, while his calmer friend tends to tolerate his antics. The world-famous duck makes perfect sense for including in the BrickHeadz theme, with 40377 Donald Duck adapting the character’s look to the standard frame.

Last year saw everything go rather quiet for LEGO BrickHeadz, with only seasonal releases. Then, late last year, 75232 Kylo Ren & Sith Trooper saw the return of the licensed collectible sets. The first releases for 2020 – 40377 Donald Duck and 40378 Goofy and Pluto – are great choices. Unfortunately though, for anyone who was not collecting the sets 18 months ago, 41624 Mickey Mouse and 41625 Minnie Mouse are now rather expensive to buy.

Donald Duck first appeared in 1934, appearing in The Wise Little Hen, before appearing alongside Mickey Mouse in Orphan’s Benefit. Since then, the character has appeared in animated shorts, animated series, feature films, theme park attractions, comic books and pretty much any other conceivable way a character could be presented to an audience.

Unlike the builds in 40378 Goofy and Pluto, 40377 Donald Duck slavishly follows the usually BrickHeadz format. His webbed feet differ and give him an extra smidgen of cuteness, while his hat is nicely represented. Two printed pieces are used for the front and back of his outfit. The sides of his head seem a bit too flat and could have benefited for some texturing to represent his feathers.

Disney fans, especially those who have particular affection for the character, will find 40377 Donald Duck hard to resist. Collectors know by now if the LEGO BrickHeadz format is for them and this set does not do anything surprising with the format.

40377 Donald Duck is available now at LEGO.com. You can help support Brick Fanatics’ work by using our affiliate links.