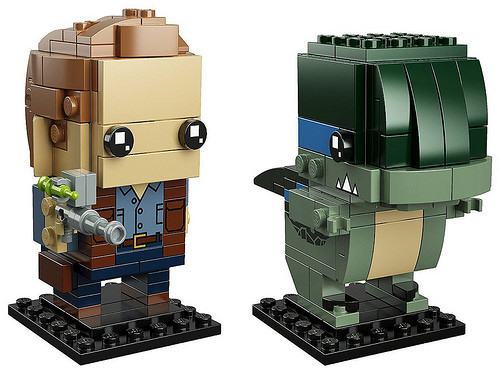 Images of the first LEGO BrickHeadz set based on Jurassic World: Fallen Kingdom, 41614 Owen & Blue, have been shared online.

With the LEGO BrickHeadz theme rapidly expanding this year, Jurassic World: Fallen Kingdom will be joining the range as was previously rumoured. The first set based on the dinosaur disaster movie will be 41614 Owen & Blue, with images of the two pack published by the Brick Fan. A recommended retail price of $19.99 is expected.

It is an appropriate pairing, as Owen’s impetus for returning to the abandoned Jurassic World site in the upcoming sequel is to rescue Blue, the raptor he raised and trained. BrickHeadz sets are known for regularly including printed parts, with this box including dino teeth, dino patterning, a pocket and Owen’s outfit as printed elements. This particular set is the first time that an animal has appeared as a BrickHeadz model, perhaps opening the door for more creatures to join the humans released so far.