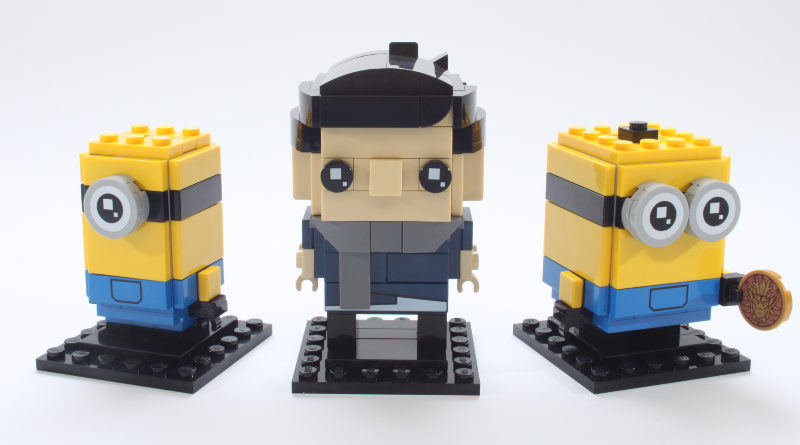 Universal’s Minions continue their slow takeover of society with 40420 Gru, Stuart and Otto, a brand new addition to the LEGO BrickHeadz range.

Originally hailing from Despicable Me, Illumination’s Minions have been embedding themselves into the minds of many since 2010. With another (much-delayed) film on the horizon, BrickHeadz for the characters had to happen eventually – but can these latest builds in the theme of collectible and stylised figures make for a set that’s one in a minion, or are they actually something truly despicable?

Despite the Minions being the namesake of the franchise, the build begins with the younger version of Steve Carrell’s Gru, a character who is dominated by an elongated nose and grey scarf – both of which are represented well enough here. However, for the starting point for the set, it’s really no different from most other BrickHeadz and comes across as an unfortunately uninspired introduction to the trio of models.

The other two characters in the set are a far different story, though. Unless you’ve been living under a rock, you’ll know that the Minions have a simple but iconic design, with yellow skin and blue overalls in a cylindrical shape. This structure is something that finds itself very suited to the BrickHeadz format and the sharp colours of these two latter characters draw the eye far more than Gru.

Stuart is the thinner of the two included yellow fiends, with a singular eye and some patchy hair adorning his head. The interior build stretches the heads of most 3×3 BrickHeadz over the full figure, making for a break in the usually monotonous process of construction. Otto shakes things up once again with a similar structure in a 4×4 brick pattern, and a single tuft of hair atop the head as a simple but elegant addition to the character.

Whilst no minifigures are included in the set, the characters remain the highlight of the BrickHeadz theme as Stuart and Otto pair well on any shelf, the unique style of eyes matching with the grey goggles of the adorable and blocky Minions.

Like most other sets in the BrickHeadz theme, the value is mostly subject to how much of a fan you are of the individual property – in this case, Minions. The price-per-piece ratio is as to be expected, which isn’t a bad thing. At a total of three printed pieces – two of which are exclusive, and the other only available in one other set – there’s an argument to be made for the value, but it really depends on how much you’re into the denim-clad characters (and Gru).

At the end of the day, you’re likely going to be buying 40420 Gru, Stuart and Otto for the latter two characters, with Steve Carrell’s Gru simply failing to be as memorable and eye-catching as the Minions. While none of the builds are particularly bad and all have personality and unique aspects to them, Otto and Stuart are more colourful, different and downright fun to build than Gru.

If you’re a fan of the Minions then you won’t be disappointed with the trio of models, with one main character and two loveable sidekicks recreated for any desk, shelf or wherever you so choose. But if you’ve ventured into the world of BrickHeadz before and know little to nothing about Universal’s blockbuster property, then there may be better LEGO options out there.

Support the work that Brick Fanatics does by purchasing your LEGO Minions or BrickHeadz sets through one of our affiliate links.

How long does it take to build LEGO BrickHeadz Minions 40420 Gru, Stuart and Otto?

This is a BrickHeadz set, so you shouldn’t expect a lengthy build. The total time for all three characters comes to about 20 minutes, making it a nice, quick set to put together between other activities.

How many pieces are in LEGO BrickHeadz Minions 40420 Gru, Stuart and Otto?

40420 Gru, Stuart and Otto consists of 244 bricks, including 10 printed parts: two for the denim pockets; one for Stuart’s hair; one for Gru’s shirt; and the last for the Draconic design on the round tile.

How big is LEGO BrickHeadz Minions 40420 Gru, Stuart and Otto?

With their bases, each of the BrickHeadz characters measures 5cm wide and 5cm deep. The individual heights differ with Gru measuring just under 9cm tall and both of the Minions coming in at under 7cm.

How much does LEGO BrickHeadz Minions 40420 Gru, Stuart and Otto cost?