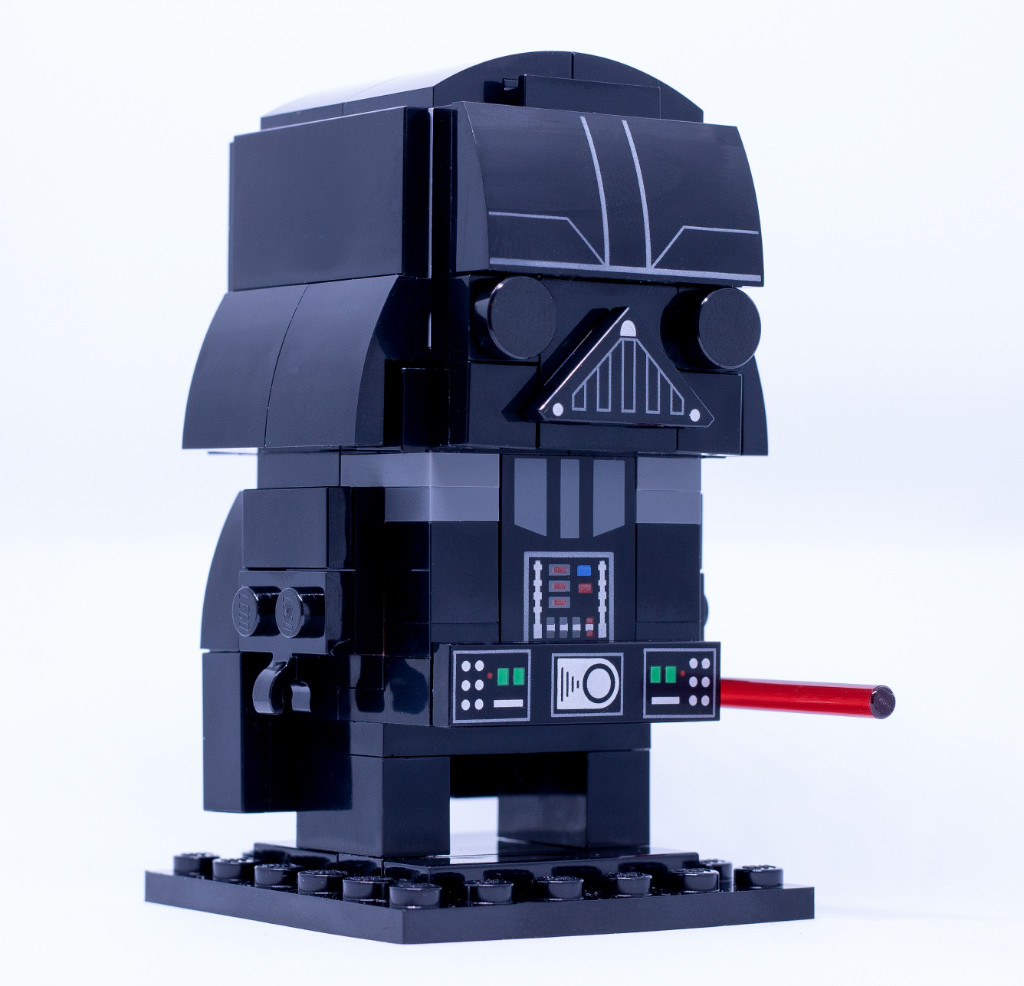 Will this new LEGO Star Wars BrickHeadz set do justice to cinema’s most iconic villain?

Two of the most popular LEGO Star Wars minifigures are Darth Vader and the original trilogy Stormtrooper. With both characters having such strong and iconic designs both on screen and in the LEGO Group’s original interpretations, will they translate into the blocky, unique and quirky style of LEGO BrickHeadz?

The two characters have been appropriately released together, with this review focusing on 41619 Darth Vader. Tipping the somewhat meagre 104 pieces out of the two unnumbered bags, the initial experience starts well with a collection of printed tile pieces that scream ‘Vader’ straight away. From the belt and chest plate, complete with movie accurate buttons, to the grilled nose element and curved helmet part, everything looks as it should. 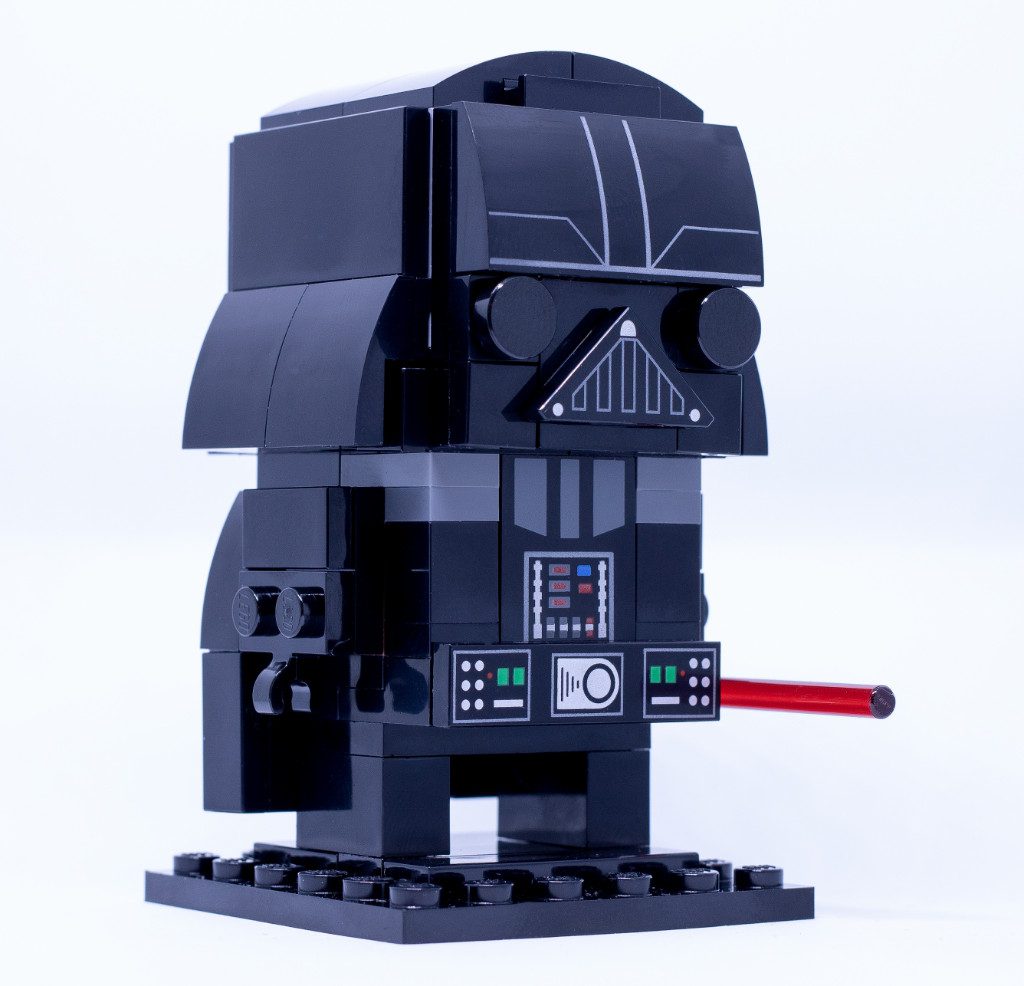 Unfortunately there isn’t anything particularly special about the rest of the pieces included in this set. Usually in a LEGO Brickheadz set you can expect to find a few interesting and varied bricks but with Darth Vader there are just a handful of black curved pieces and the rest are standard bricks, plates or tiles. All pretty much in black.

Onto the build itself, very early on Lord Vader’s belt and chest plate are added to the model. It does help to create a strong visual from the start, but I prefer it when you are not quite sure where the build is going until you add one or two key pieces later on and everything starts to come to life. Almost straight away you can tell what you are building with this model and I would have liked two or three more steps before connecting the two printed parts to the structure.

Continuing the build, you slowly add pieces to help build up the former Jedi’s body and helmet. Unusually at one point you are required to connect a 1×3 plate onto only two studs, leaving part of the plate overhanging. Underneath is a 1×1 tile and actually it does a really good job in creating an interesting angle for the helmet. I also like the way the dark bluish grey 1×1 plates seamlessly merge with the dark bluish grey on the printed piece. It’s a really nice design and does look like the top of Vader’s chest.

From here on in, the design starts to go downhill rapidly. Two 1×1 round tiles are used for the Sith Lord’s eyes and they just look too big. The nose plate, although a really well designed printed tile, does not feel right either. The connection itself takes a little work to align properly, as it’s only connected by one stud. It is more reminiscent of the Angry Birds Star Wars Vader character or even Stewie Griffin as Darth Vader from the Family Guy parody episodes.

Moving onto the cape, this again feels like something that the LEGO Group have got wrong. It is just not big enough, the cape would have been better were it slightly wider on both sides, to give 41619 Darth Vader a more menacing presence. As it is, it is far too narrow and close to his body.

The helmet is too squat looking. There are limitations when building in this style, but it would have been improved by being that little bit bigger. There is also a thin dark grey line that goes all the way around the helmet, which could have been easily avoided by using black pieces underneath instead of the dark blue grey. I honestly don’t understand this design choice. 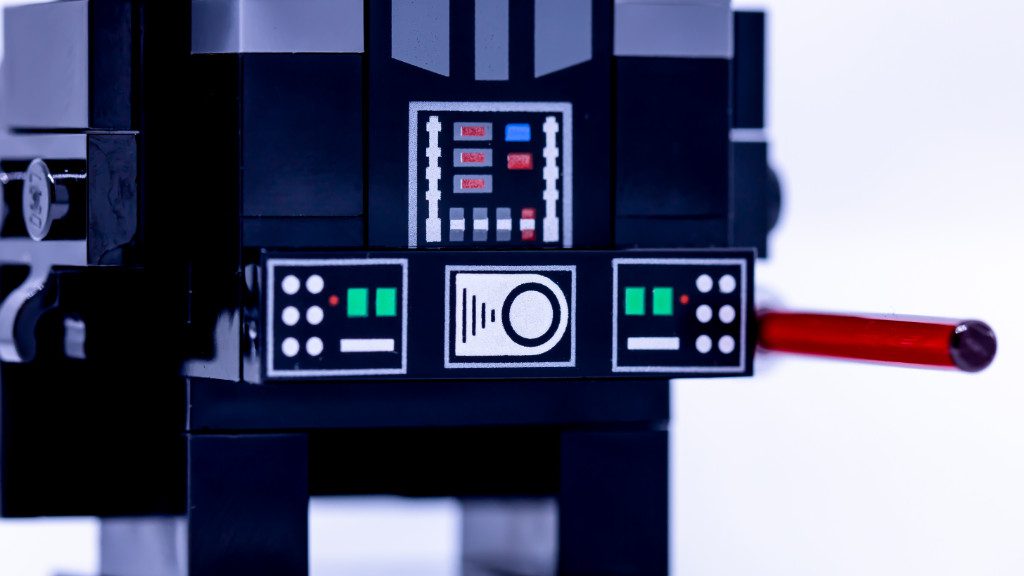 Returning to the question of whether this BrickHeadz set will do the Dark Lord of the Sith justice, the answer is unfortunately no. If it wasn’t for the printed pieces adding the necessary detail, it would look awful. The character is nowhere near menacing enough, does not look imposing and instead looks a bit too comical. When placed next to other BrickHeadz models, Vader looks too small.

In this instance, the lack of interesting pieces, the build itself and the final design leave very little to enjoy about this experience. The BrickHeadz style might not work for every character, but there are some fantastic custom made Darth Vader Brickheadz out there, so it is possible. Hopefully the LEGO Group will revisit this character as a BrickHeadz set in the future, and release an improved version.

41619 Darth Vader is only recommended this to people who either really, really love the character or are collecting every single LEGO Star Wars BrickHeadz – this set has well and truly gone over to the dark side.