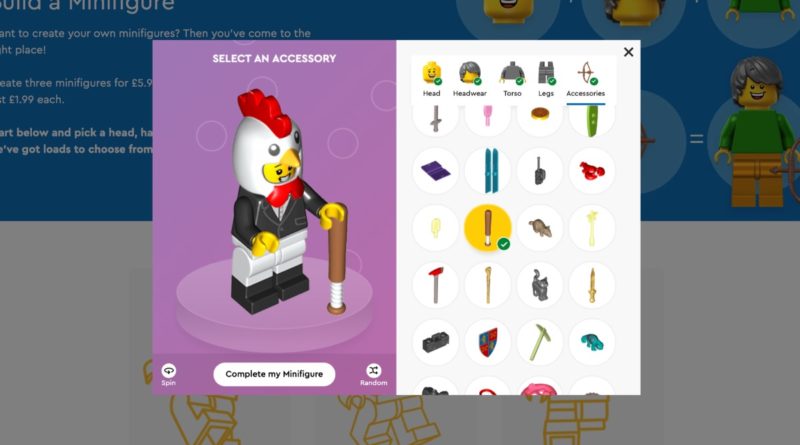 A beta version of the LEGO Store’s Build a Minifigure bar is now available online in the UK and Europe, and there are some pretty decent parts in the mix.

Plans for an online version of the Build a Minifigure experience were originally announced alongside the recent merger of the Pick a Brick and Bricks and Pieces systems, and the LEGO Group has now delivered as promised. It’s only available in the UK, Europe and Asia-Pacific at the moment, and the parts selection is fairly limited, but it still looks pretty good on the whole.

Just like the in-store Build a Minifigure bar, you can create three unique minifigures for £5.97 in the UK. Additional characters will then cost an extra £1.99 each. Once you’ve customised as many as you’d like, you’ll simply add them to your bag in the normal way, and they’re then treated like any other LEGO.com purchase in terms of delivery, VIP points and so on.

Minifigure parts will ship separately from the rest of your order – in the UK, they’ll take between 11 and 15 business days to land on your doorstep – but you won’t need to pay a separate shipping fee. Buying a £45 set and three minifigures will therefore qualify for free delivery, surpassing the usual £50 threshold.

Given this is only a beta experience, we can probably expect a bigger variety of elements to be available further down the line, but the initial selection has some interesting pieces – including plenty of different colours of dual-moulded legs, and several cool hat/hair combo elements. Each minifigure gets a head, torso, legs, hair/headpiece and an accessory.

Click through to LEGO.com to check out the full selection of parts currently available across European and Asia-Pacific countries. There’s no word yet on whether Build a Minifigure will eventually be rolled out to other regions.