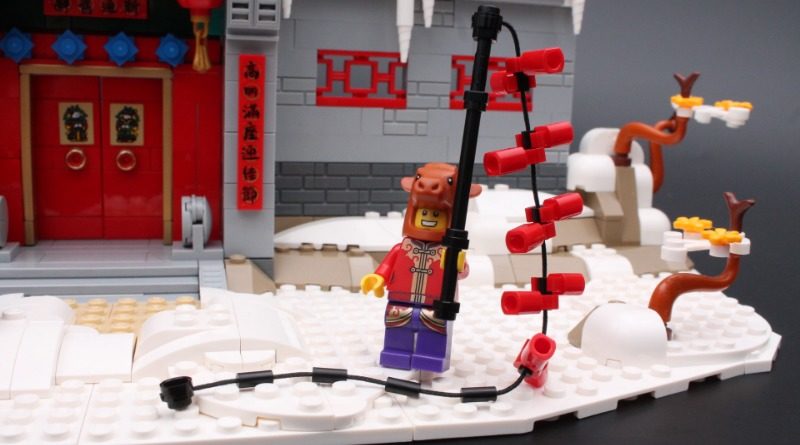 Standing as a Chinese New Year set that speaks first and foremost to its primary demographic, 80106 Story of Nian brings a legend into the modern day – with mixed results.

As you might have guessed from its name, 80106 Story of Nian leans a little more heavily into traditional Chinese mythology than the rest of the seasonal theme. It doesn’t suffer from it, though: in fact, the very best elements of the set are directly related to that mythological creature.

Just like 80107 Spring Lantern Festival, this cheaper set is also notable for how – on a whole – it deviates from the wider Chinese New Year range, this time choosing to depict a traditional Asian residence. Yet for as much as its 2021 counterpart is successful on pretty much all fronts, 80106 Story of Nian can’t quite hit the same highs, whether by consequence of limitations in its source material or simply increased expectations.

To really get the most out of 80106 Story of Nian, you need to know… the story of nian. (It’s a LEGO set – it’s not meant to be complicated.) The modern legend of the nian tells of a creature larger than an elephant – or perhaps lion-sized, depending on which account you read – that would emerge from its hiding place at the beginning of Chinese New Year and feast on men, children and animals in the local village. Fortunately, the beast is said to have been sensitive to fire and loud noises, and – by some stroke of luck – afraid of the colour red.

Some legends use the nian to explain the origins of the Chinese lion dance, which you might recognise from 2020’s LEGO Chinese New Year set 80104 Lion Dance, providing a thematic connection between the two sets. Apparently, the dance (and its use of red lanterns, red robes and firecrackers) has its roots in the methods the villagers used to ward off the nian – or at least dissuade it from eating so many children – which included banging drums, plates and bowls, throwing firecrackers, and wearing red.

All of that is communicated entirely visually in the set’s instruction manual, across two very artistic pages that just happen to leave out the bit about eating kids alive. Fortunately, it’s a pretty simple tale – all you really need to know is that monster = bad, civilians = good, and make up the rest along the way. Conflict is new territory for the Chinese New Year theme, even when it’s as rooted in folklore and tradition as it is in 80106 Story of Nian, but the set handles it well – both in its concept, and in its execution.

That’s because all the crucial elements of the story are here: an Asian residence, representing the village attacked by the nian; the creature itself, constructed in a scale closer to a lion than an elephant; and the civilians – or villagers – to ward it off. Together, those brick-built ingredients transport the nian legend into the modern day, making for a set that will no doubt find many happy fans in its primary target market.

If you’re not well-versed in (or simply don’t care for) Chinese mythology, though, you may find 80106 Story of Nian doesn’t quite live up to the impossibly high standards set by previous sets in this theme, like 80105 Chinese New Year Temple Fair, or even 2021’s other set, 80107 Spring Lantern Festival. That’s mostly down to the main attraction, both in the build and design, because while the residence’s snowy scenery is undeniably eye-catching, it can’t disguise the fact that this is literally a flat façade. It’s not even a façade in the way that some LEGO buildings are, with half a building’s depth and a limited interior. This is literally just a flat wall, and is unfortunately as interesting to put together as it sounds.

The build comes together very quickly, with far fewer inventive techniques to speak of than you might be expecting from a Chinese New Year set. There’s really no room for them, though – the lack of depth means you’re just stacking bricks, with the exception of a few brackets used to create a 90-degree shift in the direction of layers of plates and tiles around the (admittedly very ornate) doorway. The fireworks launching from the roof are nicely realised, though, and give the otherwise brutalist architecture a touch of the dramatic.

Fortunately, things pick up considerably when you reach the nian. The explosion of colour that pours out of the relevant bags is instantly refreshing next to the pile of grey and white you’ve just waded through, and the build very much lives up to the grandeur of that teal, orange and gold mix.

There’s neat parts usage and interesting angles galore, combining decorative elements with more traditional bricks – and plenty of newer pieces, like the pentagonal tiles, now in teal – to create a visually arresting and incredibly satisfying creature. It’s the best part of the build by some distance, and the most enjoyable component to pop on display, too. Even the nian isn’t entirely perfect, though: it’s a little tricky to pose, mainly owing to its short legs, but it’s so expressive regardless that you probably won’t mind.

The Chinese New Year sets have never been shy where minifigures are concerned – 80103 Dragon Boat Race includes an eye-watering 15, and had just a £44.99 / $49.99 price tag – and 80106 Story of Nian is no exception. You’ll find six characters in the box, including two grandparents, three children (definitely not to be eaten) and someone sporting an ox costume, marking 2021 as the Year of the Ox.

Grandpa’s face print is the best of the bunch, with some really subtle stubble printing, but the buck-toothed boy’s is pretty great too. But in a trend that mirrors 80107 Spring Lantern Festival, it’s the torsos that do the heavy lifting, with some properly detailed prints that will likely find application beyond just this set.

And yet – as you’re probably expecting – it’s the ox costume headpiece that truly steals the show, wisely taking its design cues from the Collectible Minifigures mascots. If you want a complete LEGO animal costume collection, you’re going to need this set.

Like pretty much all of the Chinese New Year sets, it’s hard to take 80106 Story of Nian to task over its price. Your £59.99 / $79.99 will feel absolutely well-spent in terms of the quantity of LEGO you’re getting for it. The real question is whether you feel this particular design is worth that cost, both in how much you enjoy building it and how likely you are to display it. You’ll want that nian on your shelf, no doubt, but the façade will be harder to justify dedicating valuable display space to.

That wouldn’t matter if the build was a delight – few LEGO fans have the shelf space to display everything indefinitely – but again, it’s really only a fraction of the set that truly stands out. Still, you could easily do much worse for £59.99 / $79.99…

In some ways, 80106 Story of Nian is an easy set to love. The eponymous creature is a character in its own right, taking a wonderful mix of colourful pieces and assembling them in clever ways to create a truly impressive model. It’s just a shame that it’s only one component of an overall product that doesn’t instantly blow your socks off in the same way as 80105 Chinese New Year Temple Fair, or 80107 Spring Lantern Festival.

Perhaps some of the blame can be laid at the stupidly high standards set by those sets, while more still can be apportioned to the source material. We’re sure this typical Chinese residence will find more love in the set’s primary target market, where its familiar design will no doubt resonate better with the rapidly-expanding Chinese audience. But it’s still ultimately just a grey façade, and next to the rest of the brilliantly colourful Chinese New Year sets, 80106 Story of Nian feels like something of an outlier.

That doesn’t mean there aren’t reasons to dive in – you just might want to consider this one a bit more carefully than the insta-buy that is 80107 Spring Lantern Festival.

80106 Story of Nian will launch on January 10, 2021. You can support the work of Brick Fanatics by securing your copy using our affiliate links. 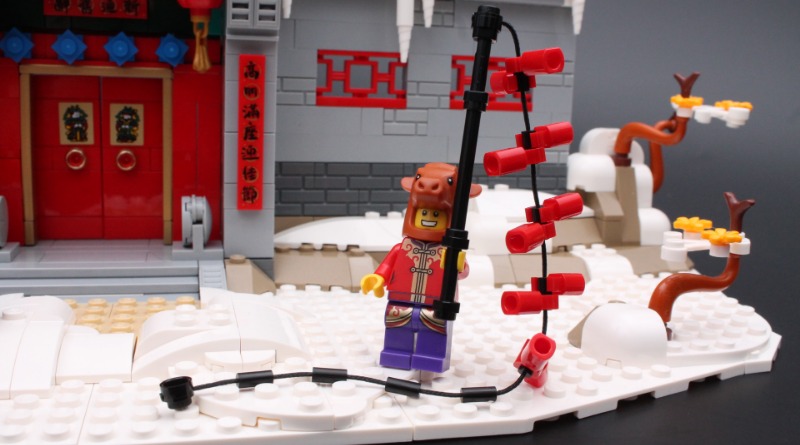