With a new generation of Power Functions comes a new LEGO City passenger train – is this a must buy for fans looking to add more transport to their layout?

Trains can make fantastic LEGO sets. There is something eminently satisfying about having a model whip around a track, preferably a really long one with lots of switch tracks and straight runs. The LEGO Group merged trains and City almost 15 years ago and it has been a good marriage overall. Every three to five years a new pair of trains are released, supplemented by track accessory packs and usually a train station. It has been four years since the last iteration, 60051 High Speed Passenger Train, hit the shelves to mixed reviews. The LEGO design team has learned a few lessons and knocked it out of the park with this one. 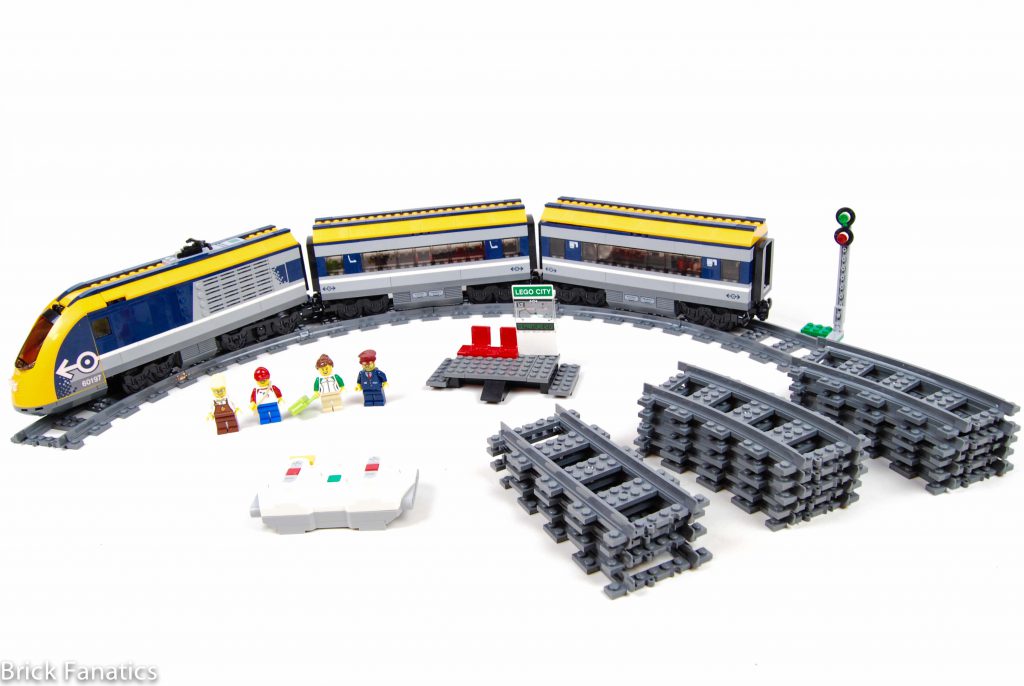 Passenger trains have consistently played second fiddle to their cargo laden counterparts. Price points have to be met, and cargo trains have consistently drawn the top billing. Accordingly, a bit of a formula has developed over the last ten years. Trains for moving people around have three cars, at least a circle of track, perhaps with four straight sections thrown in to mix things up a bit and a small platform for loading commuters. 60197 Passenger Train does not deviate at all from the recipe.

That said, there are some key differences that have been incorporated which cause this most recent passenger train to rise above its predecessors. The most notable, and indeed the one which makes all the other improvements possible, is scrapping the dual engine requirement. With the exception of the Creator Expert 10233 Horizon Express, every passenger train since the turn of the millennium has included dual engines, one real and one fake due to not having any motors or electrical components on either side. These have sandwiched a single middle car. While the symmetry has made for pleasing visuals, it has severely limited the options for what could be included in these trains. The front of the engine takes up space and limits what can also be included in the car. In light of that there has been nothing but seats in the various trains.

60197 Passenger Train bucks that long entrenched tradition and includes only a single engine, followed by two identical carriages. The engine, like its predecessors, is devoted entirely to housing the battery box and conductor’s cabin. However, there is a major departure – the new Power Functions. Utilising Bluetooth connectivity, as these updated components do, means that the old IR receiver is no longer required. Fewer wires and electronic pieces makes for a much less crowded engine. There has been some debate as to what is better, moulded fronts or brick built ones on such trains. While that debate will surely continue to rage, the understated special component which gives the engine its curved front is well executed.

Eliminating the second engine means that each of the remaining two carriages can be devoted to a specialty. Thus, an old staple from the 1990s, a dining car, makes a triumphant return. While the detail and variety of delicacies offered leaves a lot to be desired, the mere fact that a dining car is available in a standard City set is cause for celebration. As it was in the 1990s, space is cramped, but even without the multiple stickers demarcating it, this carriage’s purpose is obvious from its contents. Attached to it comes the second, more traditional, car. Containing merely four seats, this section looks very similar to the train cars included in the previous three iterations of passenger trains.

Importantly, 60197 Passenger Train has the best color schemes for a passenger train in recent memory. Two of the previous three passenger trains were white and the other red and black. The mix of dark yellow, dark blue, and grey with white accents is very pleasing to the eye. Stickers are used to perfect effect in melding and enhancing the coloration. Elegant does not feel like an overstatement. The three car long train looks excellent.

Given that this set looks great, makes good use of the increased internal space and features the upgraded version of Power Functions, it is easy to recommend to those looking for their first City train as well as those who are considering adding it to their rolling stock.