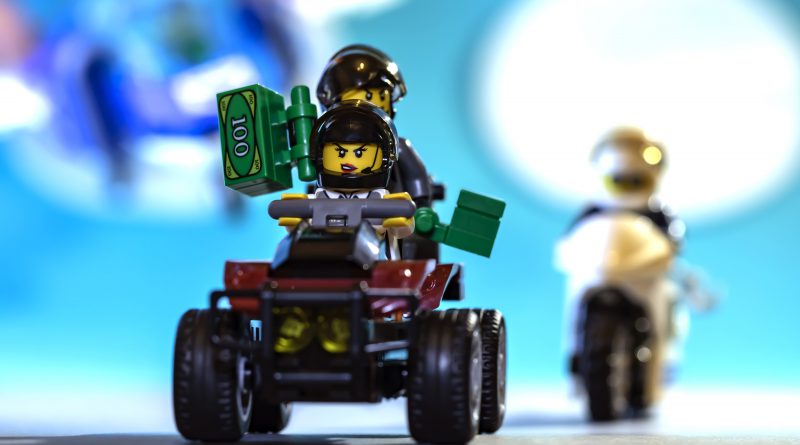 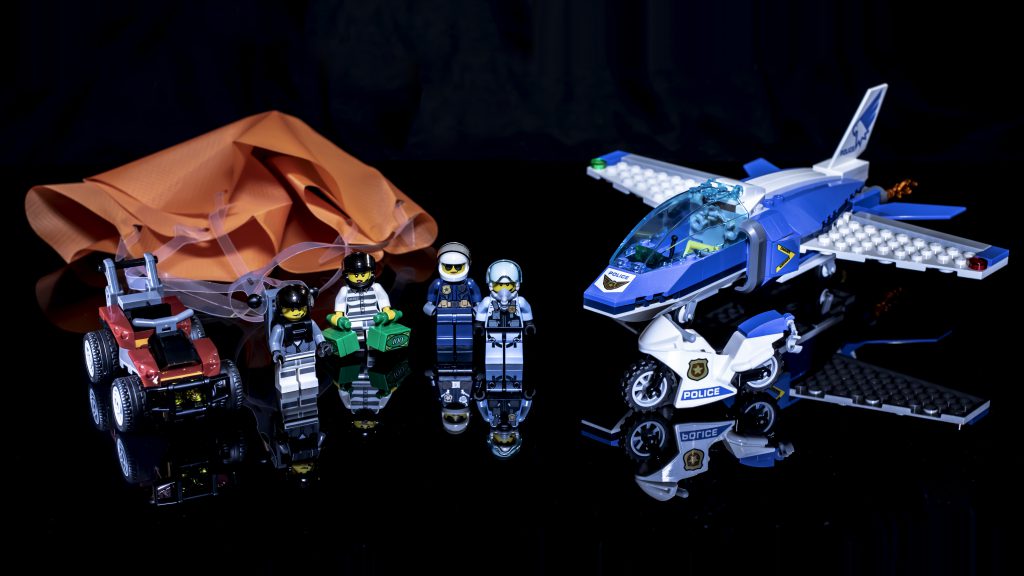 It’s still early in the year and already the LEGO City theme has seen boats that float, water cannons on fire engines and now parachutes. With the exception of 2006’s rather novel 4293136 Dino Attack Parachute and Minifigure accessory pack, the LEGO Group has never released official parachutes before.

Two are available in the Sky Police sub theme, one dark blue and the other, exclusive to this set, a bright orange. The parachute is made of a large piece of fabric that is connected to a brick built back pack by two pieces of thin plastic – a wise design choice as they don’t get tangled like string would. It is a very straightforward procedure but also feels slightly alien, using elements that are so removed from standard LEGO pieces.

The parachute’s lightweight and flimsy but works perfectly. Even when thrown at an angle it will correct itself before opening and landing safely. It’s honestly a lot of fun.

The parachute isn’t the only thing new to this set. The left and right 2×6 shell in blue is new for 2019 and the jet pilot’s mask is an exclusive to the Sky Police theme – always an exciting bonus for fans to build with new parts.

The Police Motorbike has the same design as the Fire Motorbike found in 60214 Burger Bar Fire Rescue but here its white with additional stickers adding police decals. It’s simple yet effective.

The same can’t be said for the crook’s off-road buggy. The colour scheme of dark red and black with accents of orange works well but when viewed from the side the design looks a bit awkward. The frame just looks far too slim. It’s also a very quick build, reminiscent of the sort that might find be found a polybag or on the cover of a LEGO magazine for children.

Thankfully the Police Jet offers more. It is pleasing to know the designers opted for an all brick-built plane rather than a single large hull or body piece. The build itself features a nice use of curved pieces and slopes that create a sleek design.

There are some nice elements such as the front engine intakes and the rear jet engines. Further detail is added to the back in the way of two trans-orange flame pieces that give the impression of a jet taking off.

The main play feature of the plane, a hook that swings down to either scoop the parachuting thief out of the sky or grab the crook’s ATV is made using a variety of Technic pieces. It works perfectly well and is nicely hidden when folded underneath the fuselage.

To be a little critical, while the plane does look good from certain angles it does feel a little on the basic side. This is a set aimed at a younger market so it’s to be expected but just bear in mind that fans looking for a deep building experience and a more detailed model may want to look elsewhere.

There are four minifigures in total. The female police officer has great printing on the torso but its a shame the legs are left plain. Her male counterpart is new for 2019 and exclusive to the Sky Police sub theme.

His flight suit is excellently printed with great detailing continuing onto the legs. The highlight though is the new mask and helmet piece. It really looks the part and it will open a whole host of opportunities for minifigure photography enthusiasts out there – Top Gun recreations anyone?

The two crooks are also exclusive to this set. The female criminal has a great prison striped uniform printed on the torso and legs, with her expression looks suitably mean. Her partner in crime also has the same legs but his prison uniform shirt is partly hidden underneath a printed grey jacket. He comes equipped with a brilliant helmet piece and visor but the best element is his brick built backpack. Their loot crates made of printed 1×2 ‘$100 bill’ tiles and green 1×2 plates are a nice inclusion.

This is a set aimed at a younger audience, which is made evident by the simpler building techniques on offer. The minifigures look great, especially the jet pilot. The parachute will no doubt offer hours of fun and coupled with the plane and the other vehicles there are plenty of play opportunities to be had. Even adults will get a kick out of playing with the cleverly designed parachute. It is a strong start from the new Sky Police sub theme, giving a taste of more good things to come.