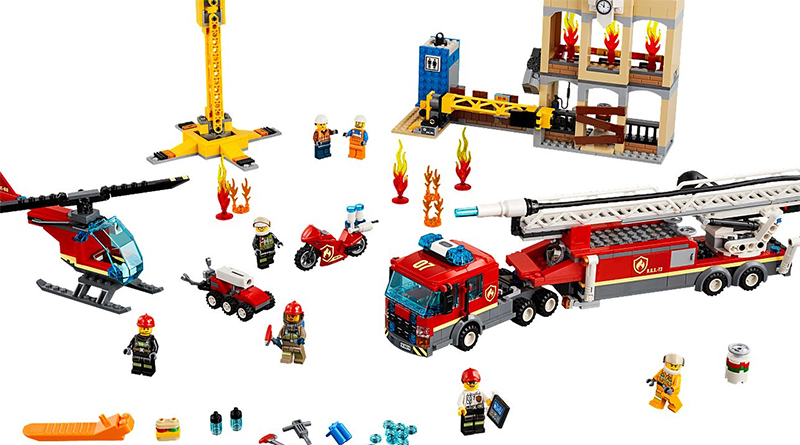 LEGO City 60216 Downtown Fire Brigade is one of this year’s sprawling Fire based City sets, with various fire-beating vehicles along with a burning building and a crane. It is now on a double VIP points deal at LEGO.com, which means instead of the usual £4.50 LEGO cashback, anyone ordering the set will get the equivalent of £9 to spend on future purchases at the website.

Until the end of Cyber Monday, the deal can be stacked with the free 40338 Christmas Tree promotion, which sees anyone spending £120 or more get the exclusive festive model for free.

Protect the citizens of LEGO City with the incredible 60216 Downtown Fire Brigade set, featuring a large fire ladder truck with new-for-January-2019 working light and sound brick, extending swivel ladder and fire hose with new-for-January-2019 pump with ‘water jet’ function. This thrilling set also includes a 3-level building with roof, construction area with fence, falling lamppost and a porta-toilet with removable top and front, plus a free-standing crane with rotating arm and functioning winch. There’s also a fire helicopter with opening cockpit and R.O.S.-T3 the ROV, both with a new-for-January-2019 multi shooter, and a motorbike with space for warning lights, and 7 minifigures.

The deal runs for the entirety of December, unless stock runs out before them.