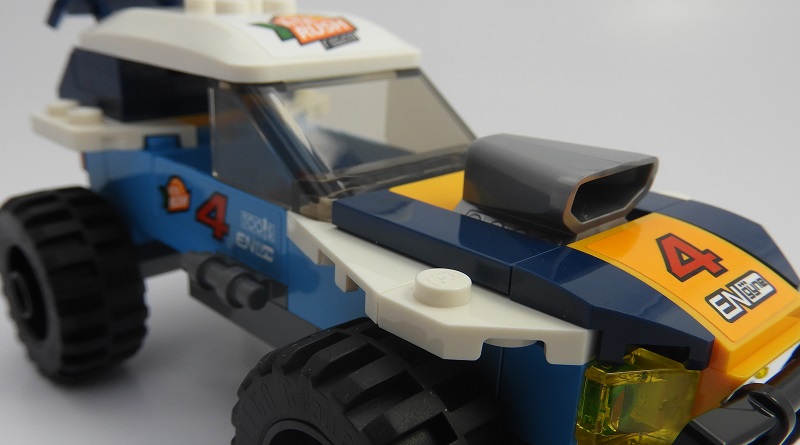 You would be forgiven for expecting this set to feel more at home as part of the Speed Champions theme, but 60218 Desert Rally Racer is most definitely a LEGO City set. It’s not the first either, as 60113 Rally C ar was released in 2016 and if you are feeling particularly nostalgic I urge you to check out set 619 Rally Car – released in 1977 – which is a wonderful reminder of how much the LEGO design team has progressed over the years. 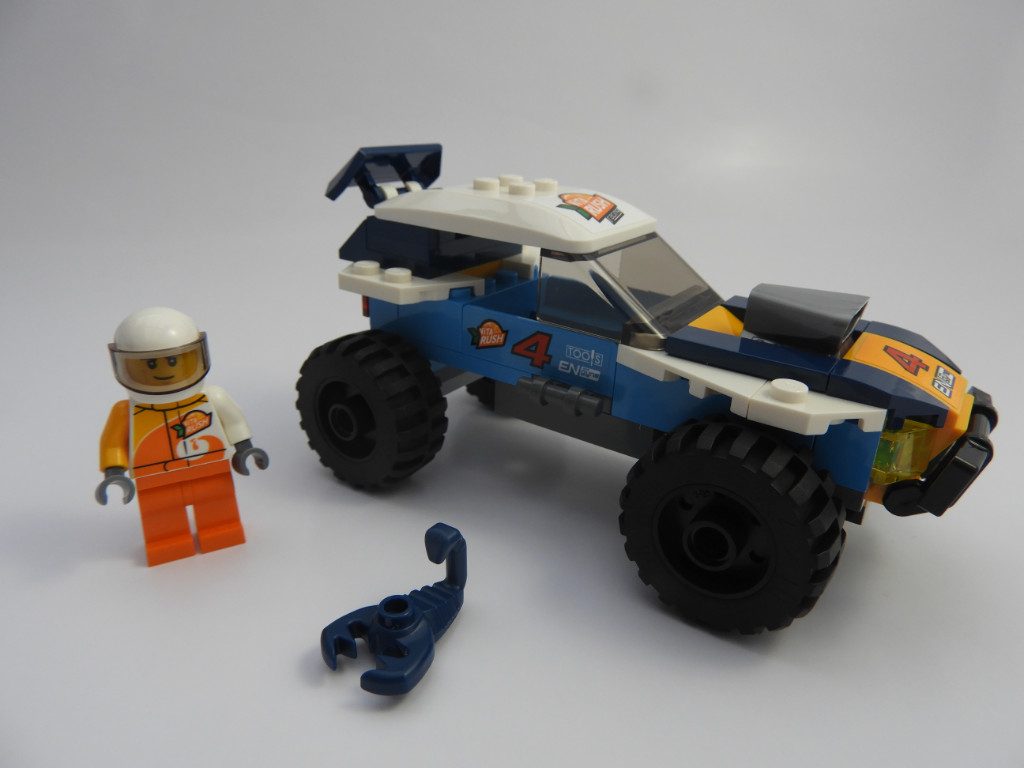 60218 Desert Rally Racer takes us into the outskirts of the city and into the desert with the help of a race car driver minifigure, a scorpion and the star of the set – the rally car itself.

The minifigure is colourful and represents the sponsor VitaRUSH very well, with orange legs and a bright torso. The torso print focuses on the sponsor’s logo and includes a suggestion of a neck support which is a nice touch. Unusually, the arms are different colours, which is a touch I have not seen very often but works well. As you’d expect the race driver includes a helmet complete with visor, and the head is printed on one side. The legs are orange, in keeping with the torso colour scheme and when combined with all of the other elements is the final aspect that  contributes to a nice looking minifigure.

There’s not much to say about the scorpion, other than the fact that it reminds us that we are in the desert and it is dark blue – a part that has only featured in one other set in this colour.

The Desert Rally Racer is much more compelling than the components that complement it. It is a great build which looks as powerful as you would expect from a rally car with large wheels, a front air intake and an adjustable rear spoiler. The use of stickers works well against the colour scheme of the rally car and the roof can be removed easily, so the minifigure can be slotted into the cockpit of the vehicle.

If you are looking for a set which is positioned at the pocket money budget, then this will not disappoint – it’s a really neat rally car with a striking minifigure and is great value for money.

60218 Desert Rally Racer is available now at shop.lego.com. You can help support Brick Fanatics’ work by using our affiliate links.