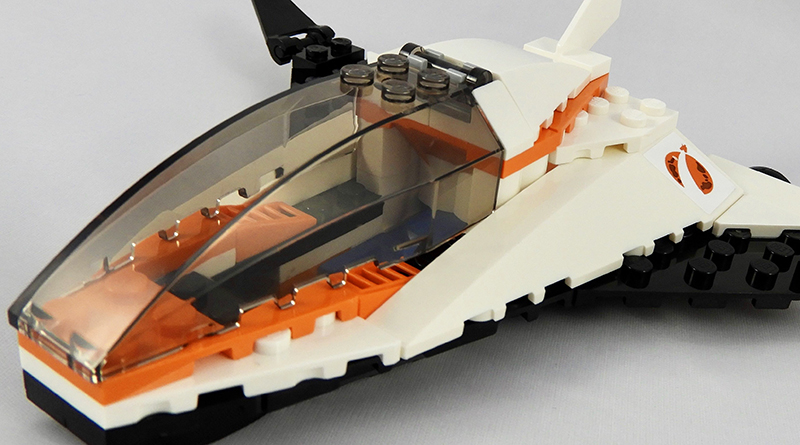 The new wave of LEGO City space-themed sets areas impressive as ever and 60224 Satellite Service Mission is the entry level set to this subtheme.

At just £9.99 and with 84 pieces this set is really good value and I’m sure targeted at young builders with pocket money in hand. The shuttle is a neat build made up of white, orange and black parts which is the colour theme that runs through the other sets that have been released in this wave. The shuttle includes a cockpit which comfortably house the minifigure and each of the wings have fins at their end for those manoeuvres that require a little more precision.

The rear of the shuttle includes a bay in which the satellite fits very neatly once folded and two hinged brackets fold across to stow the satellite in place. The cockpit includes a 1×2 printed slope part which includes nice detailing. The final detail on the shuttle requires the careful placement of two white and orange stickers on either side.

60224 Satellite Service Mission‘s shuttle build is sturdy which allows for play to extend to flight and it will withstand lots of swooshing around the room, even with the satellite stowed, without parts flying in every direction.

The satellite is great build which makes effective use of a handful of parts. The use of pearl gold is very neat and the final two stickers on the sheet provide some additional detailing on the solar panels.

The astronaut minifigure has limited but effective printing and comes with an Extra Vehicular Activity suit with a golden visor. Finally, a wrench is included for when any servicing is required in space.

A great set for the price point and as much playability as you’d expect in a set of this size. There are some excellent other sets in this LEGO City space theme and this would be a great additional to any of them.

60224 Satellite Service Mission is available now at LEGO.com. You can help support Brick Fanatics’ work by using our affiliate links.