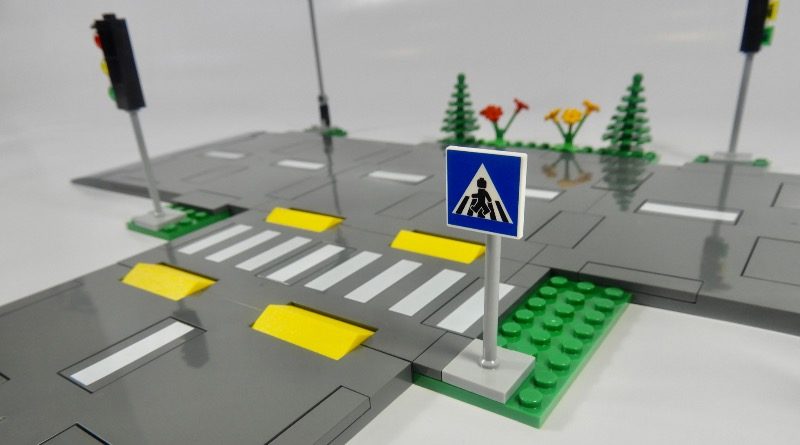 The LEGO Group brings us a new, modular approach to creating roads in LEGO CITY scenes with 60304 Road Plates – but how well does it hold up as a baseplate replacement?

Historically, the LEGO Group’s approach to creating roads has been printed baseplates with a sparse number of studs to add detail around the edges. A number of the larger LEGO CITY sets released in 2021 include the new road plates as part of the piece count, and 60304 Road Plates is a very convenient way of supplementing the parts to connect your LEGO CITY.

This is essentially an accessory set, so don’t go in expecting a satisfying or interesting build experience – but then that’s not really the point. The build is in fact a fairly straightforward process of adding the detail for the edges of the road and then connecting the various plates together.

The first section guides you through building the two streetlights, which look impressive when finished. This is a modern city, so each streetlight is equipped with solar panels, which is achieved by a neat 1×4 printed tile. There’s also a nice touch in that the 1×2 plate representing the lamp is a glow-in-the-dark piece. Each streetlight sits on a 4×4 green plate with a dark grey 2×4 tile, which allows you to integrate it with the road.

The two traffic lights also integrate in the same way and, while they aren’t a taxing build, the finished product works nicely. The instructions then lead to you add some much-needed flora and fauna, followed by two road signs – one warning of a pedestrian crossing and the other highlighting the speed limit, both of which are printed parts (there’s not a sticker sheet in sight).

The new road pieces are two plates high, and are essentially 16×16 tiles with 2×4 cut-outs that allow you to add road markings, and 1×4 cut-outs along each edge that allow you to connect further plates or details at the edge of the road. It’s a simple design, but very effective. The set also includes an 8×16 road plate that’s printed to represent a pedestrian crossing, and traffic lights to slow down the busy city traffic.

While the build guides you to create a neat T-junction and the instructions also suggest other configurations, the modular approach essentially allows you to adapt to the needs of your city and the way you wish to connect your environment. The LEGO Group has also figured that we may not own an infinite number of road plates, so they can be capped off with a couple of 4×8 curved slopes, which will allow your vehicles to join the road smoothly.

There are no minifigures in this set, but that’s just fine if it means keeping the price down on what’s essentially an accessory pack. You wouldn’t necessarily want a bunch of repeated minifigures anyway if you’re stocking up on multiple copies.

60304 Road Plates is reasonably good value, but it really needs to a supplementary set to your LEGO CITY collection in order to offer any playability. It’s nice to see these parts being included in the larger sets – like 60292 Town Center – but it could get quite expensive if you needed to purchase a larger number of this particular set in order to fully integrate your city scene.

60304 Road Plates is limited as a standalone set, but delivers a great way of integrating your LEGO CITY sets to create real fluidity when your minifigures are driving between venues. The modular system offers plenty of flexibility, and it would be great to accumulate enough of these plates to create a booming town square.

If you’re fortunate enough to own any of this year’s new LEGO CITY sets that take advantage of the new road plate system – such as 60291 Family House, 60292 Town Center or 60306 Shopping Street – this accessory pack is an ideal purchase to connect them, and even explore beyond them in a wider cityscape.

As a baseplate replacement, it has its shortcomings – curved roads will be very tricky to implement, although we’re looking forward to seeing the LEGO Group give it a go – but it’s also much more versatile and adaptable than the classic system. If you have an extensive existing cityscape, replacing your baseplates with 60304 Road Plates could be an expensive prospect, but it’s one you may just find worth your while.

How long does it take to build LEGO CITY 60304 Road Plates?

It took an easy 15 minutes to build 60304 Road Plates. This set isn’t about the individual building experience, but about how it can complement your wider LEGO CITY build.

How many pieces are in LEGO CITY 60304 Road Plates?

Once built 60304 Road Plates is 13cm high, 44cm wide and 38cm deep in the configuration the LEGO Group suggests, but given its modular nature, the true dimensions are basically up to you.

How much does LEGO CITY 60304 Road Plates cost?