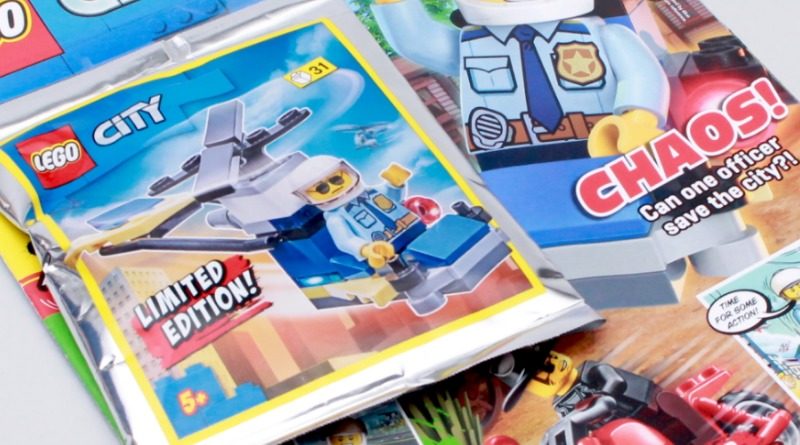 The latest issue of the LEGO CITY magazine takes to the skies with a free police helicopter model.

Immediate Media’s monthly CITY publication is still going strong, even while other titles – including LEGO Friends – are winding up. The latest issue continues its strong mix of puzzles, comics, posters and activities for younger fans, with the usual foil-bagged freebie to tempt older fans too.

This month’s model isn’t quite as enticing as last issue’s deep sea diver, but it’s hard to argue with what you get for just £3.99. For a closer look at the included minifigure and his incredible flying machine – which includes a couple of parts in a very cool colour – click here.

While most issues of Immediate Media’s LEGO titles serve up the accompanying model’s instructions on their own page, this issue integrates the copter into the middle of a comic, tasking kids with assembling the build to continue the story.

The theme of this month’s issue also ties in nicely with the recent release of 10278 Police Station, even if the target audiences for both the mag and that set differ wildly. If you’re looking for a police toy to keep your youngsters entertained while you build the latest addition to the Modular Buildings Collection, though, you could do much worse than the LEGO CITY magazine.

Issue 35 is available until February 2 at all good newsagents, supermarkets and retailers. Issue 36 will then arrive on February 3, complete with a free construction worker minifigure and buildable digger.