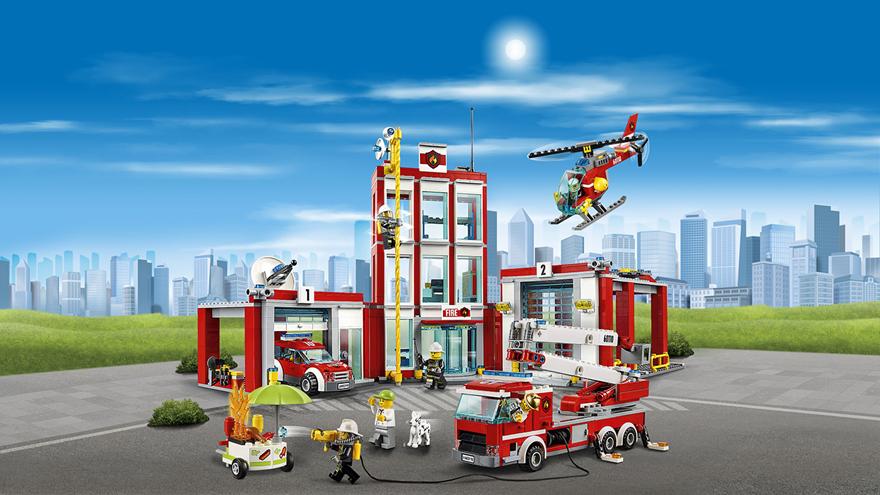 Continuing our press coverage of new 2016 sets, the UK press people have sent us feautres on the new City ranges, we kick off with the Fire sub theme. Collect and build a world where you become the hero with LEGO® City Fire sets. Be part of the crew that helps protect LEGO® City from emergencies. Here is a detailed look at the new sets for 2016.

Play out firefighting adventures and save the day with the LEGO® City Fire ATV. Use the fire extinguisher on the back of the ATV to put out the fire. Cut through the window with the saw and inspect the ruin.
This set includes a ruin section with window and a fire element that goes up and down via a lever on the side, along with a fire extinguisher and saw for the firefighter to use. Includes a firefighter minifigure.

Get into the firefighting action on land and water with the LEGO® City Fire Starter Set, featuring a fire hovercraft with a turning propeller, pier with engine and fire element, plus accessories.
Race the fire hovercraft to the pier and put out the fire! Send the diver into the water to save the dockworker. Keep the pier safe and become a LEGO® City firefighting hero! Includes four minifigures.

Be a hero in LEGO® City with the Fire Ladder Truck, featuring an extending ladder that spins 360 degrees and a pull-out fire hose with a special stud-shooter function to knock down the flames.
Hop in the Fire Ladder Truck and fight the flames on the ground with the fire extinguisher. Keep the oil barrel from exploding and protect the city! Includes two minifigures.

Be part of the crew in the LEGO® City Fire Response Unit which features a helicopter that carries water elements in a tank that can be dropped from the opening cargo doors, a motorcycle with a fire extinguisher and a container with a roof element that turns when hit by the water bricks to put the fire out! It’s another job well done! Includes three minifigures: a pilot, firefighter and a worker.

Put out the lighthouse fire with the LEGO® City Fire Boat, featuring a movable crane arm, stud-shooting water cannon that can knock down the flames, plus a dinghy, firefighting gear, kitchen, medical station and lighthouse jetty.
Rush to the rescue and send the diver out to make sure the lighthouse keeper is safe. Includes five minifigures.

The LEGO® City Fire Station has two garages and a firehouse with three floors and a fire pole, in three modular sections to build, with a total of nine combinations for the main firehouse and garages. Features the fire chief’s car, fire truck with cherry picker and a helicopter. Includes six minifigures plus a dog.

Fire Utility Truck (#60111 RRP £29.99)
Save the TV satellite dish with the LEGO® City Fire Utility Truck, featuring a trailer with cherry picker that can be raised and lowered, a special stud-shooting hose with water elements, fire extinguisher, smoke gear and many accessories. Includes three minifigures.

The abandoned house outside the city is on fire! Race to the scene with the big Fire Engine! Help the firefighters set up the engine by extending the outriggers, then rotate the ladder into position and fire the special stud-shooting hose to douse the flames. Protect yourself from the fire with the equipment in the truck. Be a hero in LEGO® City!

The new LEGO® City Fire collection is suitable for children aged 5+ and is available nationwide. For real City fun and games visit LEGO.com/CITY or search for the My City App (available on IOS and Android).