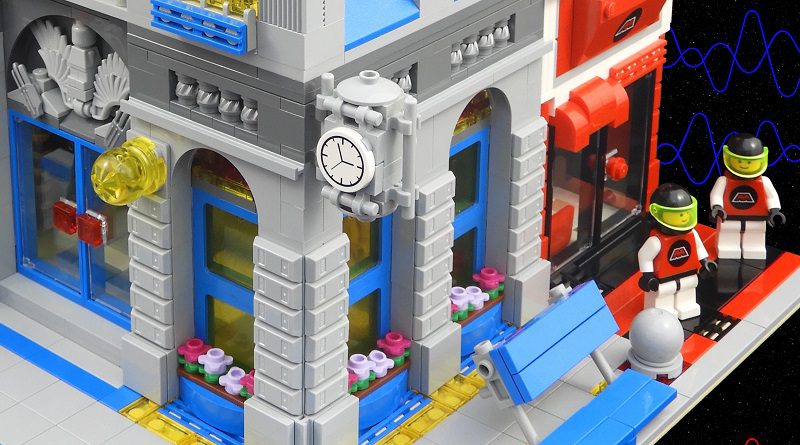 Two years ago I built my first LEGO 10251 Brick Bank – Classic Space Redux and while it was well received I was never 100% happy with it. One of the comments I received on Flickr after the initial image was posted was how much they were looking forward to seeing the interior and, unfortunately, I had to let them down gently as I’d only built the exterior of the building – the build had been photographed, collapsed and I’d moved onto my next project.

I took a different approach when I revisited this MOC and decided to build the original Brick Bank set and then deconstruct each of the floors and subsequently rework them. As a result, many of the original features still exist such as the tiled floors on the ground floor, the safe and some of the exterior brick work. In addition, the build does have stronger parallels with the original set – in particular the dark grey elements on the exterior of the building.

The laundromat part of the original set was an opportunity to bring the M-Tron theme into the build and nicely juxtapose the colour schemes against each other with a clear separation between the two.

After photographing the interior I was inspired to produce blueprints of the same images and, after following a few fairly straightforward steps in an image editing tool, I was very pleased with the results. The blueprints also include textual content for which I used a carefully selected font to represent architectural handwriting.

Some elements remain from the original build such as the use of metal detectors on the bench, the antennae on the space tree, and the reproduction of the clock in bluish grey. Other elements I was determined to improve on including. en the flat above the laundromat and the trans-yellow skylight which is possibly my favourite part of the build.

Finally, even though he commissioned this build, he is absent from the images as he was busy filming The LEGO Movie 2: The Second Part … but his space buddies are making good use of the building in his absence.