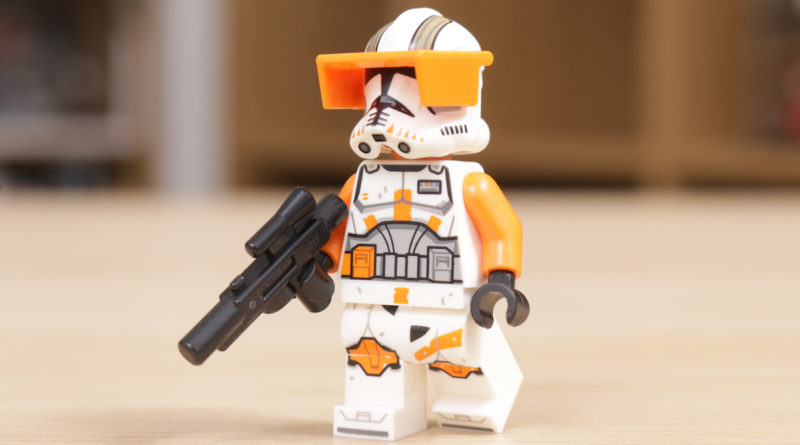 The moment we’ve been waiting for is here as a new Commander Cody minifigure launches soon, calling back to the history of LEGO Star Wars.

In the familiar galaxy far, far away that Star Wars takes place in, the millions of Clone Troopers may seem identical to the uninformed but much like the Jedi, fans have identified and connected with several key characters within their ranks. Commander Cody is but one of these troopers and has proven himself to be popular with the fanbase after his debut in Revenge of the Sith and the exploration of his character in The Clone Wars series.

With that in mind, it was only a matter of time until the LEGO Group’s Star Wars range resulted in a Commander Cody minifigure. Two such minifigures appeared between 2008 and 2011 but with him recently confirmed for the second season of the Bad Batch, a brand new version is launching in 75337 AT-TE Walker in phase 2 armour for the first time – talk about good timing!

Compared to modern Star Wars minifigures, the details on the new minifigure match or exceed that of most characters in the theme with printing on the legs, torso, helmet and head. One of our favourite details is the printing on the bottom crest of the helmet. Even though it’s not exclusive to Cody, it’s appreciated all the same.

Calling back to the previous iterations of Commander Cody, the clone gear elements return in orange with Cody utilising the visor. As you might have guessed, this works in the same way as it did with the older clone minifigures making for a familiar connection to older LEGO Star Wars fans, including us.

The rugged and scuffed appearance of the armour makes sense in the context of Star Wars, as we can’t imagine Cody has much time to maintain his armour between the various battles and skirmishes. This level of detail also serves as a good comparison to how far LEGO Star Wars has come, especially when looking at the previous two LEGO Commander Cody minifigures, which featured a lot less printing overall.

Speaking of other minifigures, this new Cody minifigure may stand out compared to other LEGO clone troopers in your collection. Yes, alongside the rest of the minifigures in 75337 AT-TE Walker he’s unlikely to stick out like a sore thumb but that’s by design with them being the 212th Legion.

No, it’s not the orange armour that will make the latest Cody iteration stick out compared to other minifigures but the newly-recoloured orange visor which has only appeared in darker shades of black, grey and red before. You might even be tempted to apply it to older versions of Commander Cody to complete their look too.

The new LEGO Star Wars Commander Cody phase 2 minifigure likely comes, at least partially, as a result of fan demand and it’s evident that the LEGO designers wanted to go all-out on this iteration. They even included the clone gear in a new colour to finally offer us a way to depict this classic character with accuracy the likes of which we’ve never officially seen before for Cody.

Support the work that Brick Fanatics does by purchasing your LEGO Star Wars through one of our affiliate links – thank you!