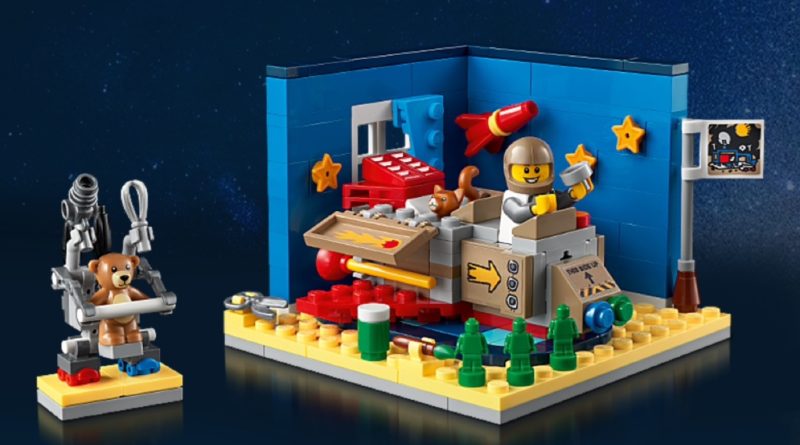 The LEGO Group has revealed the next LEGO Ideas gift-with-purchase, 40533 Cosmic Cardboard Adventures, which is based on a design by platform veteran Ivan Guerrero.

The fan designer behind 21324 123 Sesame Street took pole position in last year’s LEGO Space contest to find a future gift-with-purchase, sweeping the public vote with his ‘The Adventures of USS Cardboard’ submission in March 2021. A VIP newsletter has now given us our first official glimpse of the finished model, following a sneak peek from an online retailer earlier this month.

And as demonstrated by that initial tease, the final build feels very authentic to Ivan’s original contest entry, from the rocket designed to look like it’s constructed from cardboard to the blue-walled bedroom that acts as a backdrop. The cardboard clockwork robot is missing, but the teddy bear has been given a playful mech to compensate.

There’s no word yet on when exactly 40533 Cosmic Cardboard Adventures will be available, but given the timing of the email it feels safe to assume it’s right around the corner. When the time comes, you’ll need to spend £160 / $160 / €160 to secure your copy, which is the same threshold applied to recent gifts-with-purchase like 40531 Lars Family Homestead Kitchen.

And if you do still have some LEGO budget left after May the 4th, you should have no trouble finding things to buy to meet that required spend: late April and early May saw plenty of new sets land on shelves, across themes including Star Wars, Lightyear, Horizon Forbidden West, Jurassic World and more.

Keep an eye out for our verdict on 40533 Cosmic Cardboard Adventures – including a closer look at its cardboard rocket and teddy bear mech – very soon.