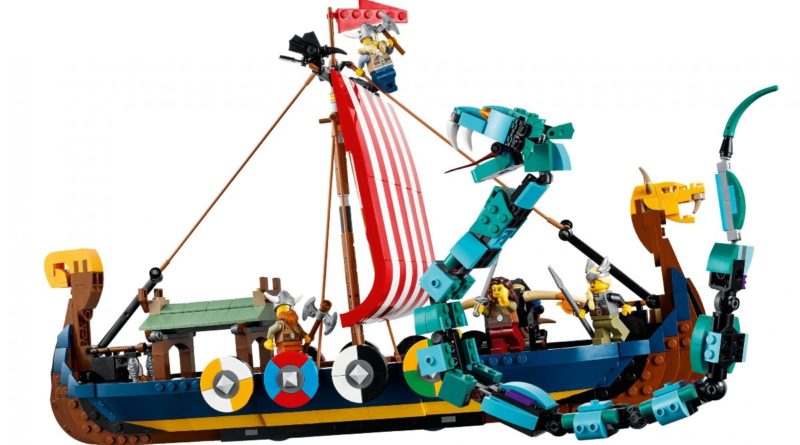 Following an image in a toy catalogue and an online listing, LEGO Creator 3-in-1 31132 Viking Ship and the Midgard Serpent has now been officially revealed.

The first official images for the upcoming Creator 3-in-1 31132 Viking Ship and the Midgard Serpent have now been revealed, showcasing more details of the highly-anticipated release. The images come via the LEGO building instructions app and include our first look at alternate models for the set. This also follows a closer look at the set thanks to a catalogue.

As well as the main ship, the set can be rebuilt as two alternative models in the shape of a Viking House and Fenris Wolf. The house features a removable snow-covered roof, forge, straw bale on fire, brick-built cow and plough and a small red dragon model. The Fenris Wolf is an impressive brick-built model of the beast from Norse mythology, with a movable head, mouth and legs, plus a small conifer tree scene to construct.

Of the four minifigures, one of the female Vikings receives a new dual-moulded headpiece with a winged crown and hair braid, whilst all of the characters have new torso prints. The minifigures are armed with swords, axes and spears and the shields from the ship can be detached and held.

We don’t have an official release date for Creator 3-in-1 31132 Viking Ship and the Midgard Serpent just yet, but a recent listing online and in a catalogue suggests that it could be available from June 1 for €119.99