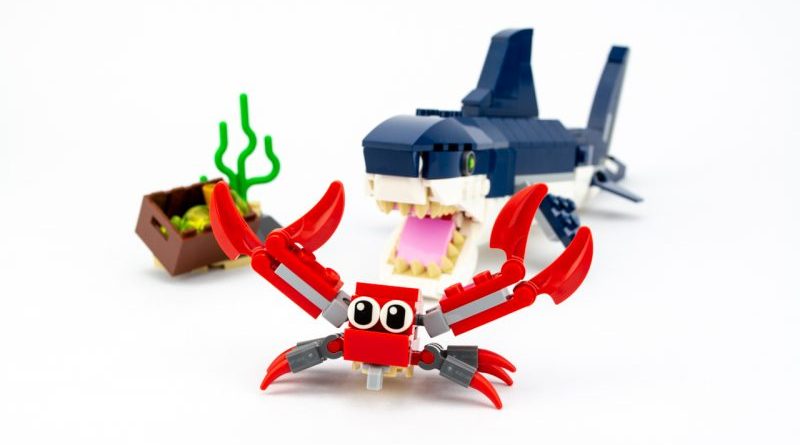 Continuing with the aquatic-themed LEGO Creator sets, set 31088 Deep Sea Creatures is almost certain to be a hit with all ages from the outset. It may be at the smaller box/piece count end of the LEGO spectrum, but that’s no bad thing here. With no expensive license or minifigures to hike the price, the sole focus here are the buildable models and the box is all the better for it.

It’s fairly safe to say that although 3-in-1 sets are a brilliant concept, the main appeal is usually the primary model; the one designed that utilises all the pieces, and in this set it comes in the form of Carcharodon carcharias, aka the Great White Shark.

Before getting to the fin-tastic model we are treated to a quick build in the form of a small red crab who makes use of slightly rarer printed eye tiles allowing for a more expressive face. It’s a very simple build but the pincers making use of ball-socket joints shows that you don’t always need many parts to build an effective and articulate model. A couple of pearl-gold treasures in an angled brown crate next to some seaweed and the scene has been nicely set.

The beauty of some LEGO sets are the multiple stages of mini-builds that don’t quite make sense until the instructions require them to be joined together. Such is the case here; starting with the head, the designers have you twist and turn as you put together an assortment of small pieces to build up the shark’s recognisable features including an ingenious use of a lightsaber blade for the eyes. The jaw can be moved up and down, and thanks to the modified 1×2 tan plates with teeth, there is more detail than could be achieved in the past thanks to new elements that LEGO likes to treat fans to every so often.

The torso is split over two more builds which are connected via ball-joints allowing for some flexible horizontal movement and some slopes to render a decent body curvature. Once the tail fin is attached with a friction-hinged plate the shark is complete – and looks absolutely brilliant.

The great thing about Creator 3-in-1 sets is that once you have built one model, you only have to take it apart, pull out a fresh set of instructions and continue with models B and C. In 31088 Deep Sea Creatures we are treated to builds of both a squid and an anglerfish. If the latter doesn’t sound too familiar by name, then the model itself should be to anyone who has ever watched Pixar’s Finding Nemo. In fact, judging by the design and the little fish swimming away from it, the model has almost certainly been influenced by that very scene in which Dory and Nemo are terrorised by a pretty monstrous-looking version of the underwater creature.

Some of the red bricks from the crab are re-used here to make a little fish (with the expressive eye tiles) who looks petrified of whatever horror lies behind it. Although the build itself isn’t complex, it’s more involved than it appears, with the angles used for the jaw quite satisfying to attach. The eyes are connected via ball-joint plates and a trans-neon green diamond at the end of a hinged plate serves as the anglerfish’s esca (the bit growing from the top of its head) used to lure prey to their doom.

The squid uses the least amount of pieces from the available elements included, but yet still manages to perfectly encapsulate the look from the bulbous, elongated head and the legs swimming in a line behind it. There is a bit of minor repetition in this model, predominantly with the legs, but the options for display thanks to those handy ball-socket joints once again, are excellent.

The last thing worth noting in this set is that while printed instructions have been included for three models, a photo on the back page indicates that a fourth model of a blue whale can be built if you head to the LEGO website for instructions. 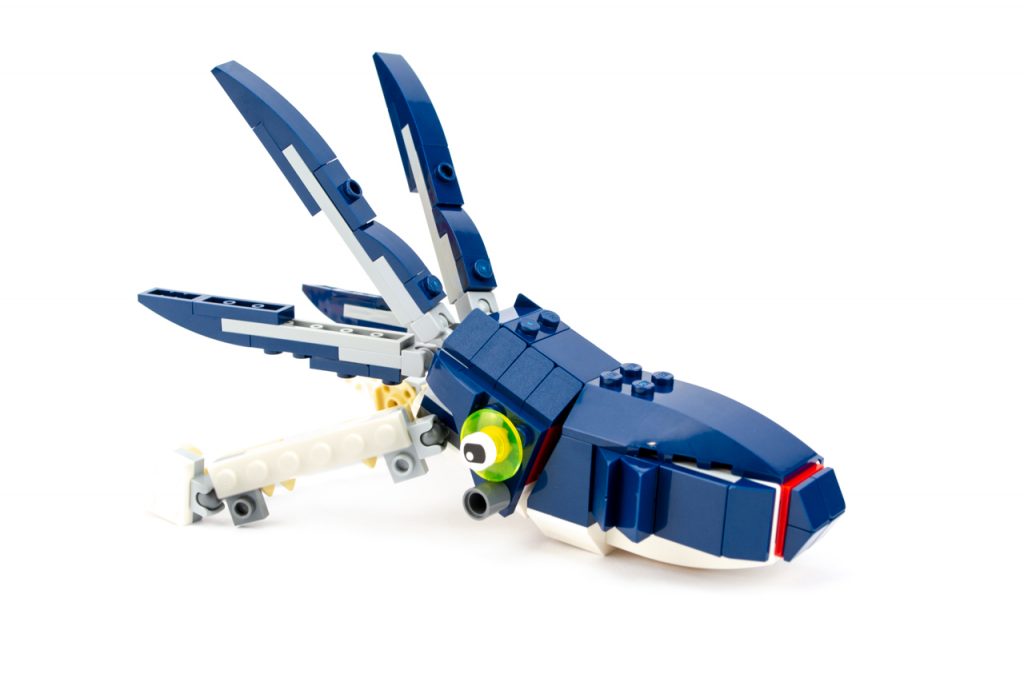 Overall this set comes very highly recommended. A 4-in-1 model is an easy way to distract a child (or adult) for a short while, whilst not breaking the bank. The cons of 3-in-1 sets are that it’s not possible to build all the designs at once, however at this price, you could pick up another one or two simply to have them all displayed. With a nice selection of dark blue pieces to please the MOCers, and a very displayable shark model to build, what more could you ask for – especially at £12.99?

31088 Deep Sea Creatures is available now at shop.lego.com. You can help support Brick Fanatics’ work by using our affiliate links. 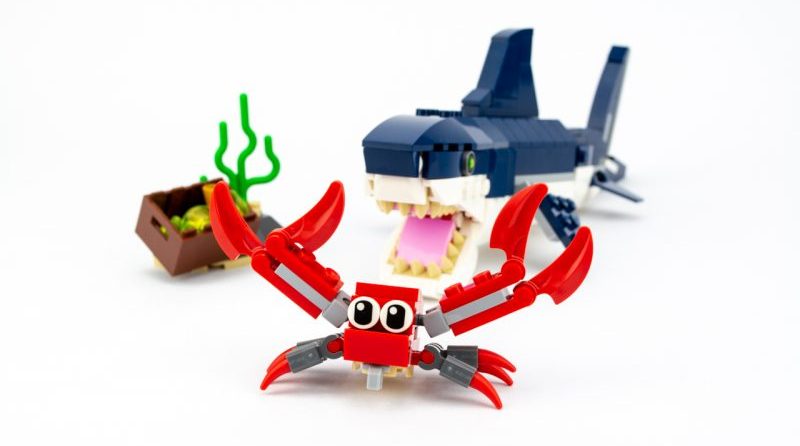