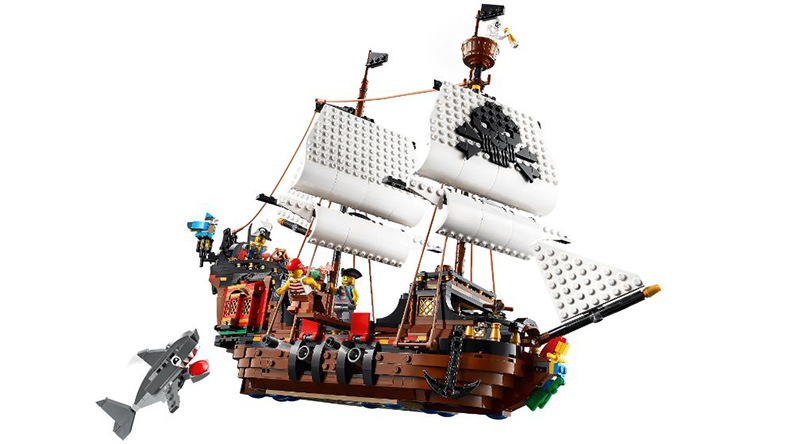 LEGO Creator is following in the footsteps of LEGO Ideas and bringing back Pirates, with 31109 Pirate Ship on the way this summer. A new gallery of images better shows off the new set.

Back at International Toy Fair, LEGO Creator 31109 Pirate Ship was announced as a summer release. While a small image revealed the set, fans couldn’t get a proper look at the details or alternative models.

Now, Kostickylega has published a selection of images of the set, giving collectors a nice, clear look at the model and the two alternative builds that can be made with the same bricks.

It has been a good yeat for LEGO Pirates fans, as this set follows LEGO Ideas 21322 Pirates of Barracuda Bay.

31109 Pirate Ship is an entirely brick built model, with no cloth sails. Instead, the sails are built using white elements with black pieces providing the detail. Moulded hull pieces are nowhere to be seen, instead the set is built from smaller pieces right from the off.

Three minifigures are included in the set along with a skeleton and buildable shark. Some classic Pirates elements, including the crow’s nest and treasure chest, are found in the box.

Images have also been released for the other sets in the wave – 31108 Caravan Family Holiday and 31110 Space Rover Explorer.