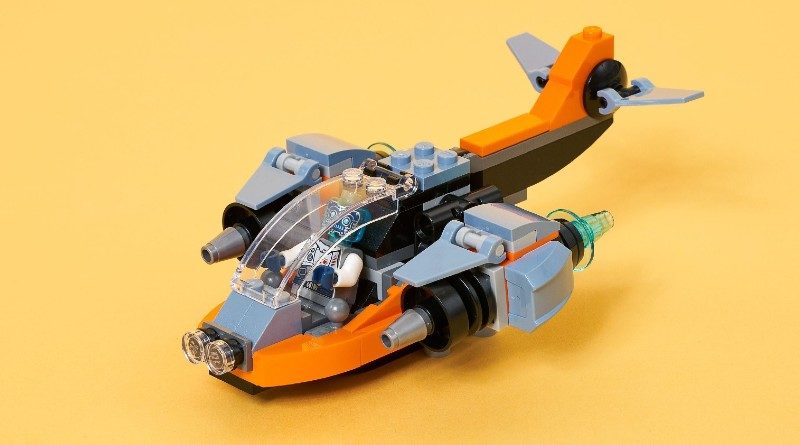 The LEGO designer behind 31111 Cyber Drone has revealed some interesting facts and Easter eggs included in the new Creator set.

The LEGO Creator 31111 Cyber Drone is new for 2021 and to mark its release, LEGO designer George Gilliatt has taken to Twitter to share some secrets, inspirations and more that can be found in such a small build.

A blast from the past

The new Creator set includes an interesting colour scheme of orange, grey, black and sand blue. As well as these colours work together, there is a greater meaning behind them. The set shares its colours with a past creator set, 4508 Titan XP which released 15 years ago. The designer compared the sets in an image, showing just how similar they look.

A brick from a galaxy far, far away

Continuing the visits to past sets, 31111 Cyber Drone reintroduces a brick first used in a 2002 Star Wars set. The sloped 2 x 2 brick reappears in sand blue in this set, after first appearing in 7103 Jedi Duel, which released 17 years ago.

Even the alternate builds of this set hide their own secrets. One of the alternate forms of this set is explained to have taken inspiration from 7701 Grand Titan from the Exo-Force theme, a name that many fans may be familiar with. Comparing the two in an image makes the inspiration clear with the two fin pieces forming the scissor arm from the original set.

31111 Cyber Drone is a rare LEGO Creator in that it contains a minifigure and an exclusive one at that. The Cyber Droid minifigure features a new torso and head print, that the designer explains calls back to the first LEGO robot minifigure, the Spyrius Droid from 1994. An image compares the two, revealing just how closely they resemble each other.