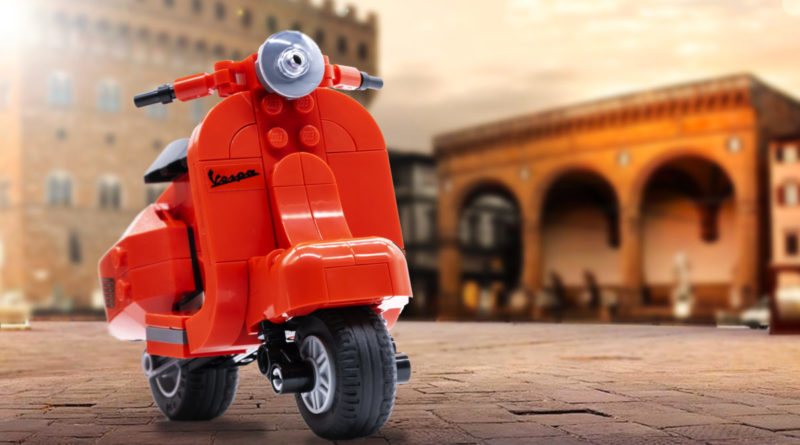 Smaller vehicular Creator sets, such as last year’s 40469 Tuk Tuk and 40468 Yellow Taxi, fill a perfect gap in the LEGO portfolio. They’re nowhere near as expensive or large as the Creator Expert sets, and they aren’t as detailed as Speed Champions.

Instead, they offer a cheap alternative while still maintaining a decent build experience – perfect for casual fans, pocket money purchases or those looking for a quick and cheap LEGO fix in between the larger, more involved models on the market.

40517 Vespa is an interesting entry as it acts as a companion piece to the much larger 10298 Vespa 125. It’s not often that the same subject matter is released in two different sets at the same time, so fans of the Italian motoring icon will no doubt be thrilled – but is there enough on offer here to appeal to a wider audience?

Two bags containing all the [currently undisclosed number of] parts and a small sticker sheet are included inside the box. Upon pouring out the contents of the bags, you’ll be greeted with an abundance of bright red parts, which makes for a very striking final model.

The build begins by constructing the back end, the seat, the side panels and rear mud flap. There’s not many parts used, but those that are here create excellent and recognisable shaping almost instantly. A single piece makes up the sloping of the entire back, while two 4×4 wedges form the bulk of each side panel.

Curved slopes, 2×2 wedge corners and a handful of tiles are also expertly used during the construction of the framework – it may be a small model, but it’s one that shows just what can be achieved with only a handful of bricks. The rear mud flap’s sticker has the number ‘1946’ printed on, marking the year that the first Vespa was released on to the market – a nice nod to the history of the iconic scooter.

The front of the scooter is a completely separate sub-assembly, and again exhibits some really smart parts usage and techniques – especially the way the front tyre comes together. Built from two 1×1 headlamps, 1×1 round studs with holes and two 1×2 Technic lift arms, it’s not only cleverly designed, but looks authentic too. To complete the model, the two side foot rests clip on to either side of the frame.

Despite the size, the shaping throughout is excellently designed, recreating the famous curves with a high degree of accuracy. The only thing on the entire model that perhaps could have been slightly improved is the top of the handlebars, which lacks any curvature. It’s not entirely accurate, but it’s such a small negative that it is easily overlooked.

The colour scheme feels perfect and the stickers add that final level of detail, completing a compact yet decent model. It’s a fairly quick build, but nonetheless a very enjoyable one. Two main assemblies slot seamlessly together, creating a classic Vespa that very much hits the spot.

40517 Vespa is many things – affordable, fun and well-designed – but to scale with minifigures isn’t one of them.

At a time when prices of not just LEGO but pretty much everything seem to be on the increase, it’s a rare treat to find a set that’s not only enjoyable to put together but one that most certainly won’t break the bank. At £8.99 / $9.99 / €9.99, this is a great purchase for anyone with pocket money to spend, or without the display space for 10298 Vespa 125.

LEGO Creator 40517 Vespa is a surprisingly good set. Even though the build is over fairly quickly, it’s still an enjoyable model to put together. There are some decent techniques on display and really smart parts usage throughout. It’s one of those sets that really highlights just what can be achieved using a relatively small amount of parts.

For those with limited space, or finances, this makes for a brilliant alternative to the much larger 10298 Vespa 125. It offers up great value, an enjoyable (albeit short) LEGO experience, and the final model looks simply excellent. It’s hard to call a set so small a must buy, but there is a lot to love about this compact little model – it’s simply bellissima.

How long does it take to build LEGO Creator 40517 Vespa?

40517 Vespa is a pretty small set, and as such will probably take a skilled builder around 15 minutes to complete, while younger builders may take a little longer. Either way, it’s a really smart and enjoyable build.

How many pieces are in LEGO Creator 40517 Vespa?

We don’t yet have a final piece count for 40517 Vespa, but all of its parts are put to fantastic use throughout. It’s a great example of what can be achieved with just a handful of bricks.

How much does LEGO Creator 40517 Vespa cost?

The LEGO Group has yet to reveal the price for 40517 Vespa, but we’ll update this review when we know it.