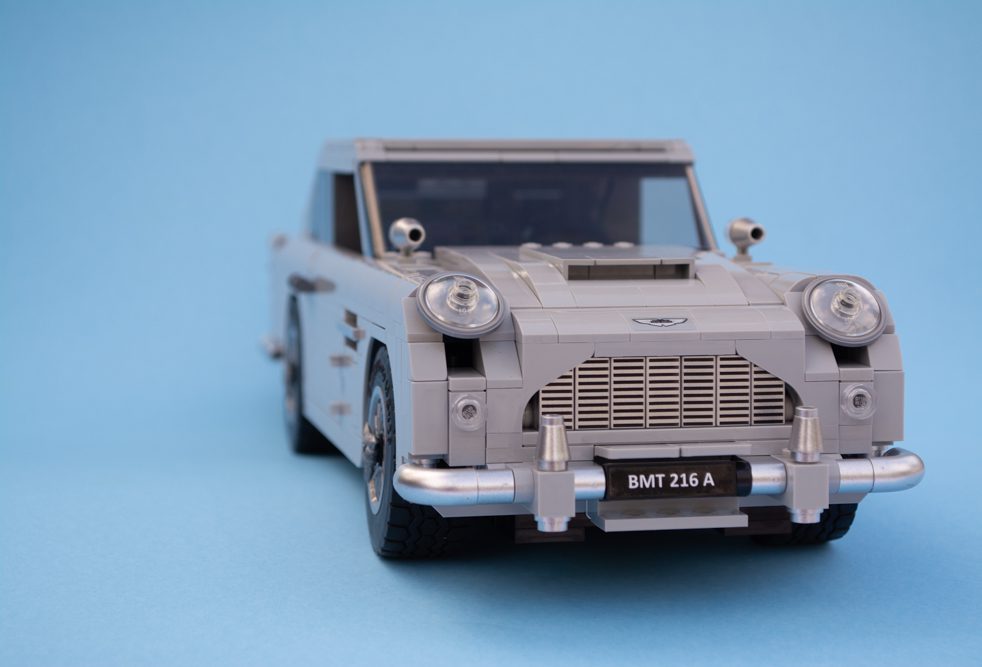 Following the announcement that the LEGO Group, Aston Martin and the James Bond producers would be collaborating on 10262 James Bond Aston Martin DB5, Brick Fanatics stops by Q Branch to take a closer look

Having grown up watching the James Bond films and enjoying the secret spy escapades of the secret agent 007 in his various incarnations, I never imagined one day that there could be a chance of an official LEGO set release.

Continuing the trend of a yearly release within LEGO’s Creator Expert vehicle line, 10262 James Bond Aston Martin DB5 is quite clearly targeting the AFOL market both in nostalgia and visual appeal, but even more so with the build itself. I’ve built quite a few of the vehicles in this line over the years and this car stands out as one of the most complex internal builds I’ve come across so far. 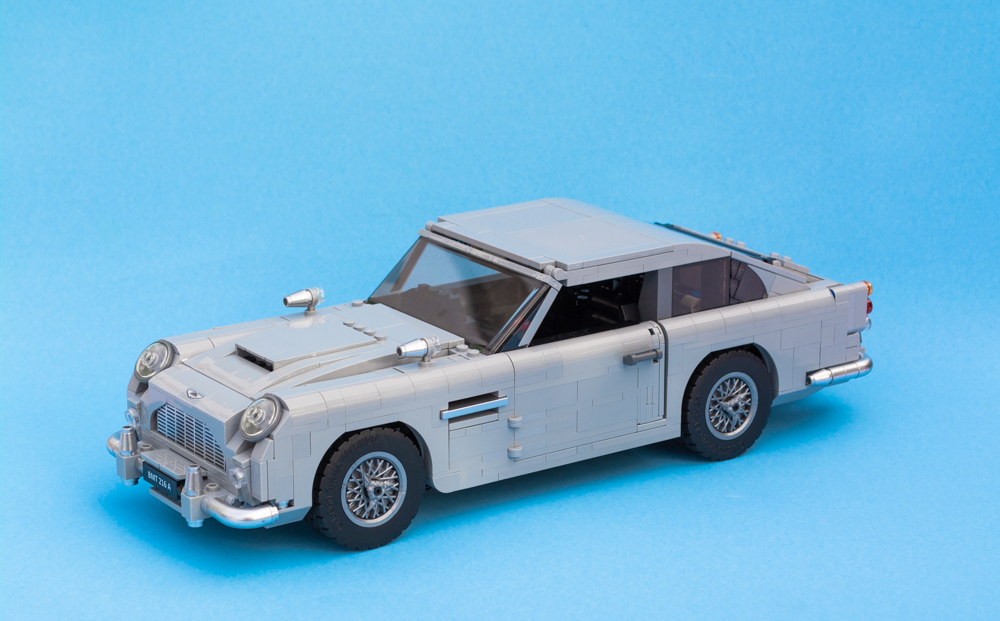 The box itself is a nicely packaged affair with the famous gun barrel viewpoint from the opening sequence of each Bond film displayed in the background whilst the Aston Martin DB5 stands out proudly in the forefront, thanks to its lighter colour scheme (unfortunately it is predominantly made of grey bricks rather than silver, no doubt for cost reasons). It’s smart and simple, but an aesthetic that emits a luxurious sensibility in a similar vein to the Architecture theme over the busier imagery sometimes accompanying younger audience-targeted sets.

The instructions stand out thanks in part to their excellent graphic design, forgoing the usual matching box art image of the completed set. Instead, they resemble a secret dossier one might expect to be given as a top-class secret agent, with the words ‘For Your Eyes Only’ written in both English and French along the middle. The opening pages feature information about the DB5 (again in both English and French), and scattered throughout the booklet are some nice technical blueprints with a brief explanation of the gadgets included in the build. 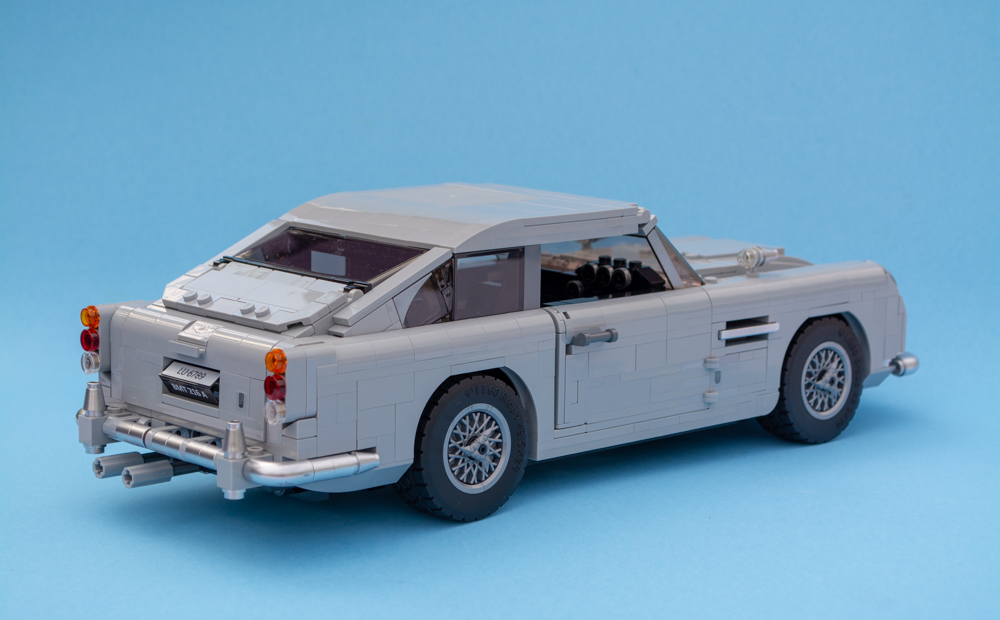 All of these touches enhance the overall experience, making you feel like you’re the agent that will be driving this car once built, which is why you should want to know which gadgets will be at your disposal in your fight against international crime syndicates.

Starting with the chassis, a number of Technic parts are incorporated for stability right from the get-go, along with a red-buttoned hand lever connected to a long link rod that we don’t find out the use for until much later in the build. As each stage progresses, you realise that a lot of this set could really be classed as a Technic set, were it not for the overall use of more System bricks – which most fans will be especially grateful for. 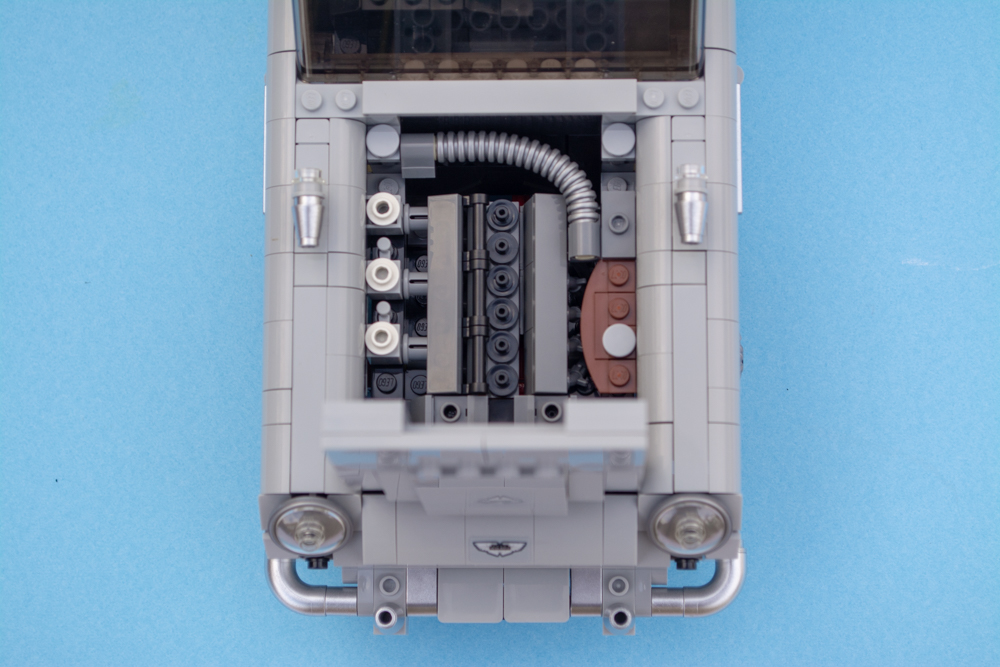 There are plenty of sub-assemblies required that are always fun to make, allowing larger chunks to be added to the core model in one go. The techniques used are ingenious all the way through with the amount of mathematics required to make certain angles work mind-boggling.

Detail is hidden everywhere, from the headlights clipped in with white droid arms, to the detailed dashboard on the interior, along with several uses of very clever hinge design on the doors, the boot and the bonnet. New wheel alloys are included here in pearl silver, but a number of other more metallic silver parts are dotted around the build including the iconic side panel detailing cleverly constructed using a 2×4 tile and macaroni pieces curving around the bumpers.

For a model that is so symmetrical from the outside, you’d be forgiven for thinking that the build might feel repetitive and laborious in places. Luckily, for me personally, it never did. It continues to hold your attention as you marvel at how each part is put together, and there are often little subtleties that mean sides might differ slightly at times. I could easily talk at great length about every aspect of the build process, but in order to preserve some of the mystery and reveals you’ll joyfully discover courtesy of the designers, I’ll move on to the gadgets instead. 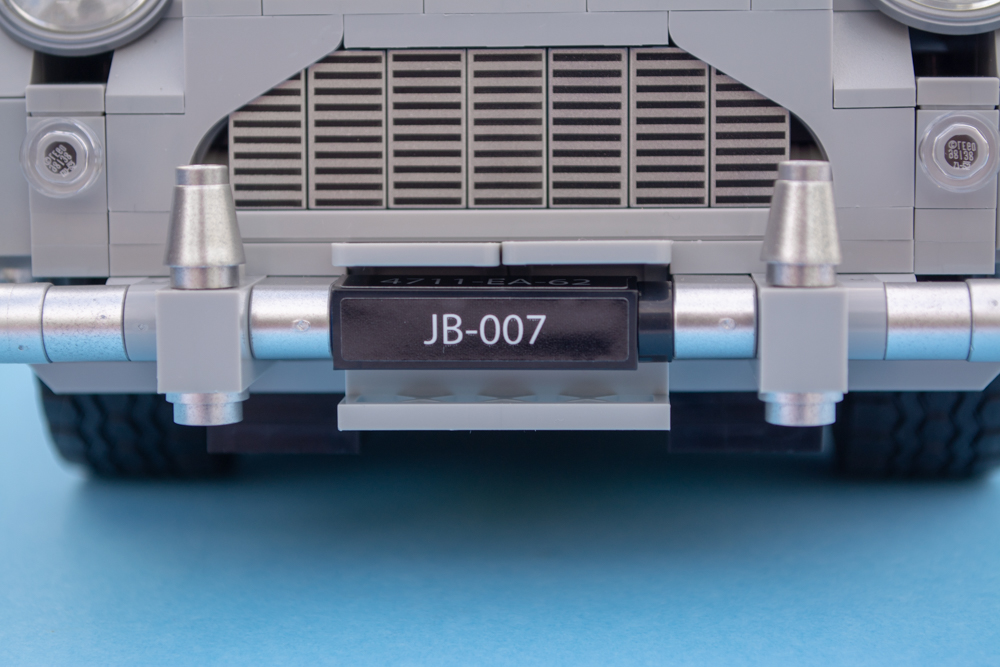 When images of the set first appeared, it was hard to get over-excited because it didn’t immediately look like any gadgets had been incorporated, but actually there is an abundance of them. The simpler ones include a fold-out compartment on the inside of the driver’s door, revealing a red telephone whilst a satellite tracking system is revealed by rotating a cog next to the central console ventilation fan. Even the tyre scythes have been included (conveniently stored in the boot) but these have to be added manually as there was no way the designer could incorporate such a feature without specialised parts being produced for this set.

Both the front and rear registration plates have the ability to turn to one of four sides which include British, French and Swiss variations for those quick border-striding getaways, whilst the fourth one simply says ‘JB 007’. I did notice that the position of the stickers in the instructions doesn’t quite match the way they rotate in Goldfinger, so I changed mine accordingly. That might just me being extra fussy, but I like now knowing that it is even more screen-accurate. 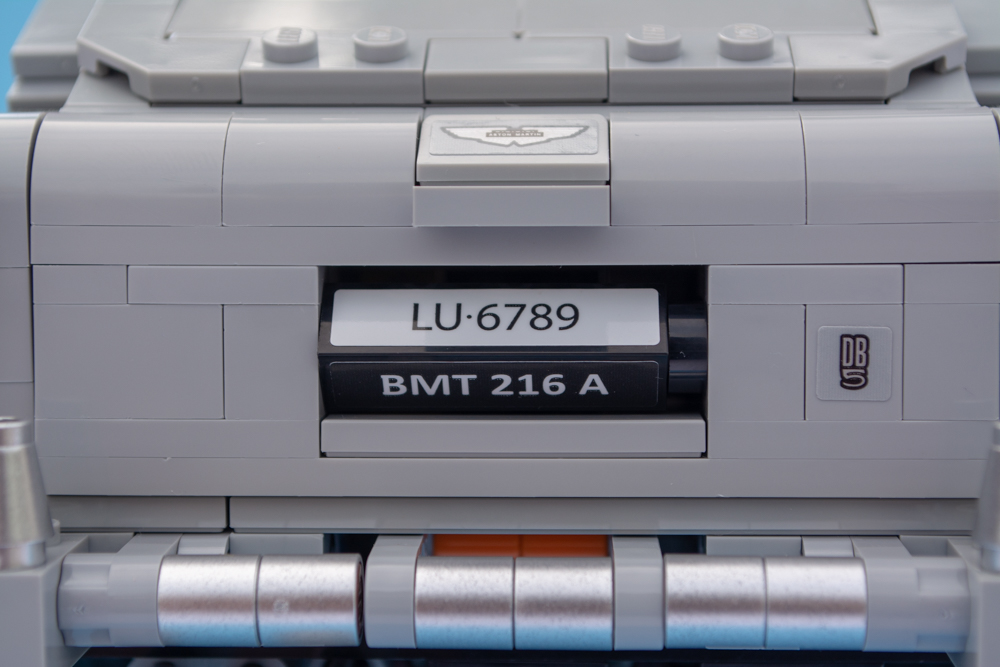 At the rear, a bullet-proof screen can be raised and lowered via one of the exhaust pipes, which I found goes up smoothly but requires a little more force to lower again, unless you just push it with your finger. Here, we also discover the red buttoned-lever triggers the rotating headlights to reveal twin machine guns. This one is particularly satisfying to play with, and is the gadget that the designer was most pleased to achieve in this set.

The main event in 10262 James Bond Aston Martin DB5 is the unforgettable ejector seat, which works even more effectively than anticipated. Pull back the rear bumper to lower the roof whilst a mechanism prepares for the moment you let go, at which point it will propel the ejector seat out of the car. Incredible – and rather addictive to play with.

Everything included here has been meticulously thought-out, with the recreation of such a curvy car being represented in the best way possible within this blocky medium. As you might expect, there is a sticker sheet, but thankfully there aren’t too many to add with most of them fairly easy to apply. They do enhance the vehicle dramatically, notably for the number plates, so I would recommend using them for the full effect.

If you’re a fan of James Bond or the Creator Expert vehicles then this set is an absolute must-have. Not only for the vastly advanced build experience, but because you have a stunning end result with the most exciting play features I can recall in a set for a long time. It may be a little blockier than the real thing, but you will have a different perspective on the set after building it once you appreciate how cleverly it was designed. Overall, this is an essential purchase for play/display and comes highly recommended.