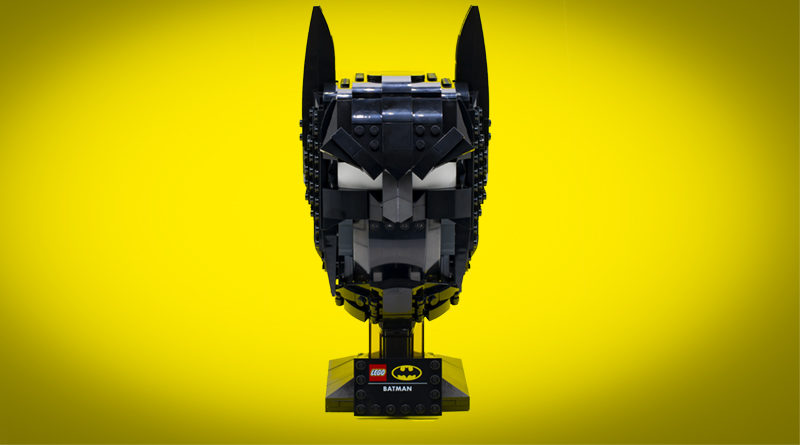 Adapting the Caped Crusader’s cowl into the now-familiar brick-built bust template should have been an easy win for the LEGO Group, but 76182 Batman Cowl is a rare swing and a miss from the superhero theme.

The LEGO Group’s helmet (or bust) collection is coming along nicely, encompassing Star Wars, Marvel and now a first character from the DC Universe. And not just any old character, but arguably the publisher’s most iconic, recognisable and popular superhero: the Dark Knight; the Caped Crusader; Gotham’s own – Batman.

It’s fair to say that the LEGO Batman theme has a pretty consistent record. From the much-loved 76052 Batman Classic TV Series Batcave to the widely appreciated and revered 76139 1989 Batmobile, the LEGO Group sure knows how to do justice to the legacy of the Caped Crusader.

So, it’s therefore safe to assume that 76182 Batman Cowl, a brick–built representation of the Dark Knight’s legendary headgear, is going to be equally stylish, clever and excellent.

But we all know what assumption makes out of you and me.

From the moment you lay eyes on the finished model on the box art, something about this set just doesn’t look quite right. And the brief interview contained within the first few pages of the manual does little to convince that this is a fully-formed concept: the fact the design team couldn’t decide on any one particular version of Batman to base the build off, and further to that couldn’t even decide whether it should be a mask, head or cowl, suggests this was probably a model that worked better as an idea rather than reality.

Just three bags contain all the parts needed to construct the cowl, the fewest parts of any other helmet or bust set currently on the market. Much like the other sets, though, an inner core with studs around the sides forms the beginning of the build. The major difference here is that the assembly is slightly staggered at the bottom, to allow the transparent pieces that form Batman’s mouth area to be attached.

It is slightly flimsier in places, and so a decent amount of concentration and a light touch is required for the early stages of the build, gearing the model towards that 18+ tag on the box. Younger builders may become frustrated with the level of care needed.

The sides, the top and the back of the cowl are all separate sub-assemblies, using plates, tiles and wedges that slowly stack on one another to create a layered effect that realises the curves of the cowl in quite an effective way. Less effective are the ears, which are built using black 1×10 curved slopes and 3×10 right and left wedges that attach to the plates on either side. While it looks decent enough, the technique used leaves the two parts unconnected, meaning they are left slightly unaligned. It’s not immediately noticeable, but once you’ve seen it, it’s hard to look past it.

The last bag, which makes up all of the cowl’s facial features, contains a surprisingly small collection of parts. The exception to this is the large trans-black cockpit piece, used for the sections of the open mouth. The designers at the start of the manual explained that it was this piece that eventually led them to deciding the model should be based on a cowl.

Does it look effective once it’s connected? Short answer: no. There simply isn’t enough depth to create the illusion that this is an open space. If this model had been a bust of Batman’s face, with tan tiles and curved slopes used for his skin, it would have possibly looked very effective. As it is, it just doesn’t work.

The rest of the facial features, however, are much more impressive, and offer some salvation to the set. The shaping on the eyebrows is a very smart assembly, which gives the model a determined and aggressive scowl befitting of the Dark Knight. The nose, eyes and brows have very clean, sharp lines, which gives the top of the cowl a very striking look.

The smooth sides that run down either side are also a wonderful design, making the transition between the front to the sides perfectly seamless. It’s a very attractive part of the final model, and this section is very satisfying to watch come to life in front of your eyes. But it’s too little too late, as just as the build becomes enjoyable, it’s over.

What’s left is a model that has an amazing top half, and a very questionable bottom half. Viewed from a certain angle, it almost looks like Batman has been frozen in a grotesque scream after having a piece of plastic shoved in his mouth – a look we can bet the designers were not aiming for.

This is the smallest of all the helmet or bust sets that have been released so far, and based on how quickly it takes to finish the model, it definitely feels it, too. However, unlike 75305 Scout Trooper Helmet – which also comes in at the lower end of the scale – 76182 Batman Cowl retails for the same price as the rest of the range.

It’s a questionable decision, as not only are there not enough parts to justify the price tag, the build and overall model are somewhat lacking compared to the other sets at the same RRP.

On paper, 76182 Batman Cowl is a fantastic idea. Who wouldn’t want a bust of one of the most revered, beloved and popular superheroes of all time? Unfortunately, the execution has really let this set down. The build leaves a lot to be desired with only a handful of inspiring moments, most coming towards the end, and the final model just doesn’t work. It looks slightly odd when viewed from the front and the profile looks even worse.

The gulf in quality becomes even more apparent when compared to the excellent 76187 Venom (review). It’s a shame to say, because the LEGO Group typically handles Batman so well, but this just doesn’t hit the mark – and as such, we’d be hard-pressed to recommend this to all but the most diehard of Batman fans.

If you really are desperate to add some more LEGO Batman to your collection, it’s probably worth skipping this and purchasing 76188 Classic TV Series Batmobile instead.

Support the work that Brick Fanatics does by purchasing your copy of 76182 Batman Cowl from Jadlam Toys or LEGO.com using our affiliate links.

How long does it take to build LEGO DC 76182 Batman Cowl?

76182 Batman Cowl comes together surprisingly quickly. An experienced builder will probably finish this within an hour.

76182 Batman Cowl is the smallest of all the Helmets released so far, containing just 410 pieces.