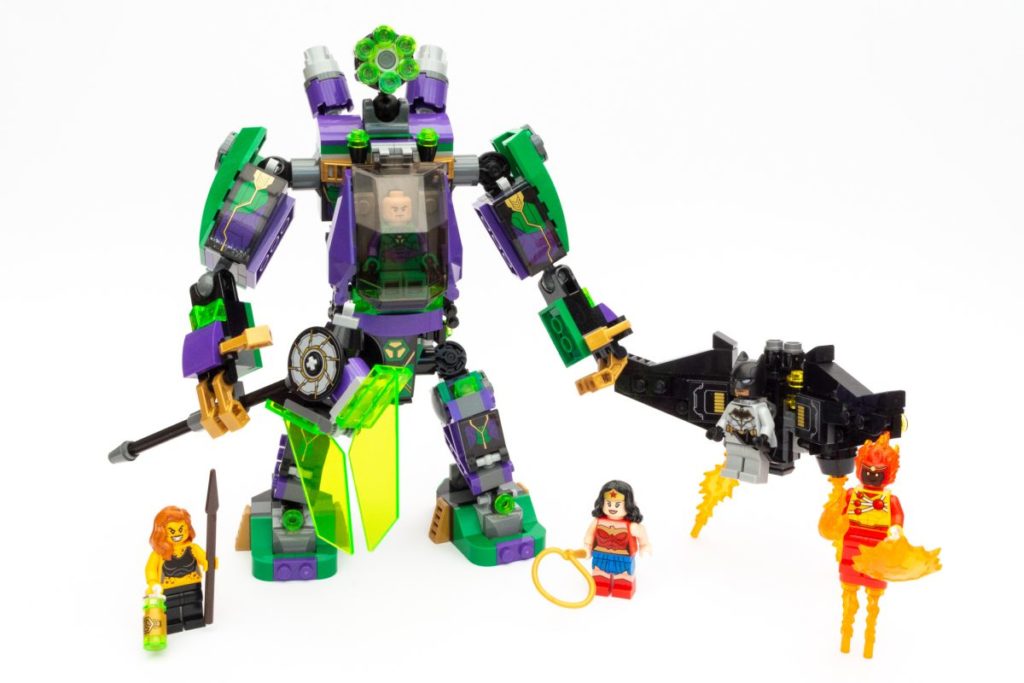 Known as one of the baddest supervillains in DC legend, Superman’s arch-nemesis Lex Luthor gets the biggest set of the most recent wave. Read on to see what we mech of it…

If you’re looking at 76097 Lex Luthor Mech Takedown and wondering why it might seem vaguely familiar, it’s because this isn’t the first time that the LEGO Group has released a Lex Luthor mech-based set. In fact, given the evergreen nature of super hero sets, it is surprising that it has been six years since the last one was released. Back in 2012, when the first wave of DC and Marvel Super Heroes sets were launched, 6862 Superman Vs Power Armour Lex was released. It was a decent, if fairly straightforward build, but gave us a powerhouse debut of minifigures in one set, containing Superman, Wonder Woman and Lex Luthor. 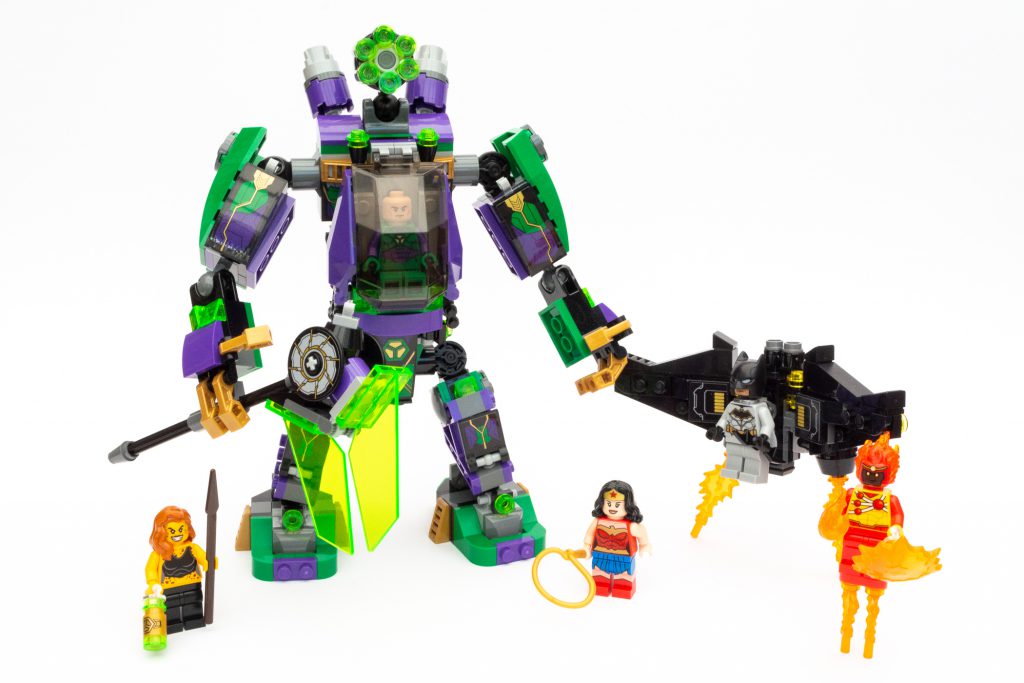 76097 Lex Luthor Mech Takedown is very obviously a newer – and vastly improved – update of that original set. With more than double the piece count it also contains a total of five minifigures which, for a fairly reasonable price by LEGO standards, is a positive start. 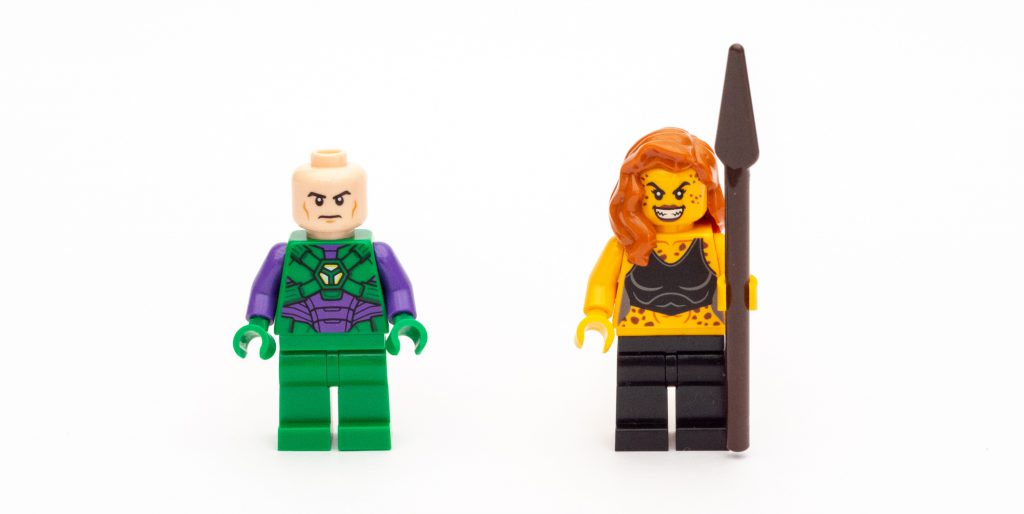 Lex appears here in his iconic green/purple combo warsuit armour, though he doesn’t have any additional moulded armour on this occasion. Not that he needs it, given the mech he is operating. Disappointingly, his arms and legs feature no printing at all, whilst his flesh-colour head is a one-sided print that we have seen many times before in other LEGO sets. 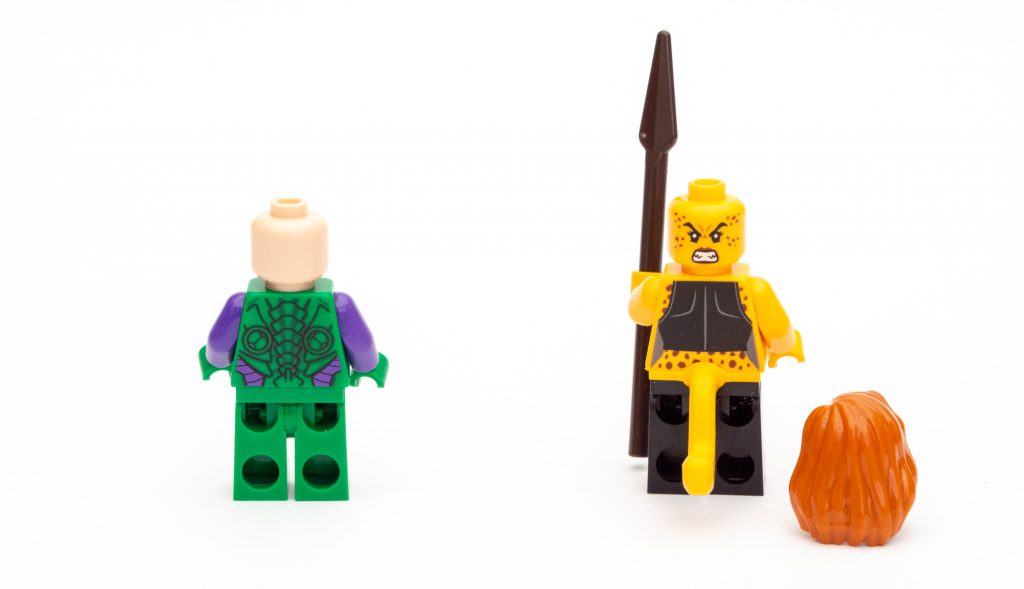 Joining Lex on his quest for supremacy is his feline companion Cheetah. This marks her debut appearance in a LEGO set and for that reason will prove very popular with collectors. Her design is based on the modern comic version, with the graphic designer doing an excellent job of her torso in particular. She has a double-sided face complete with spots and smile on one side, and a more menacing scowl on the other. No feline would be complete without a tail and the one introduced with Scratchy from the Simpsons Collectible Minifigures line is repurposed here in yellow to finish off her look. My only gripe is the same issue that plagues too many minifigures recently – a lack of printing on the legs.

It is always nice to get a Wonder Woman and here the comic version rather than the film version is included. The torso is nicely detailed with the golden winged bird, and a bit more line work in the red than we’ve had before, whilst the legs feature her classic red boots and blue skirt with pleats. Along with the printed headband integrated in her hair, this is a solid minifigure of the Amazonian warrior.

Firestorm is a character I am not too familiar with, but getting new heroes to add to the ever-expanding collection is always a plus. Based on images from comics, it looks like the LEGO Group could have gotten away with plain red legs, but adding yellow boots would have elevated it further. His torso seems accurate to the source material while the head looks amazing. Similar to the one used for Ghost Rider, it’ is an all-in-one piece, so you can’t remove the fire element from the brick. This looks great, but the pay-off means no dual-sided head here.

Finally, it seems that the LEGO Group had to release at least one non-LEGO Batman movie inspired minifigure among the latest DC sets. The Dark Knight is based on his Rebirth design, with the usual bat symbol and utility belt present. In this set he comes with a small booster jet which you attach him to via a clear neck accessory. This means he doesn’t have a cloth cape which I think makes him look slightly incomplete when posed alone, but it wouldn’t be hard to borrow a cape from one of your 200 other LEGO Batman minifigures.

The Bat-Jet Booster Wing Glider thingy is a quick build and gives Batman the chance to literally swoop in from above and save the day. As with most things Batman, it comes in black with touches of very dark grey, armed with twin stud-shooters for attacking villains and some movable jet boosters. Making use of the new Power Burst moulds, the trans-orange flame pieces here really highlight how effective they can be and are not to be underestimated. A couple of stickers later and POW! – a Batman glider.

The one problem I have is that unless you’re physically holding it to swoosh Bats around, there’s no other way of standing it up at the angle it’s supposed to be seen. Especially with the previously mentioned flame elements in it. It is a poor design flaw and unless you bend the wings to balance to it horizontally (with Batman on his back), it makes displaying it a bit of a tricky task. 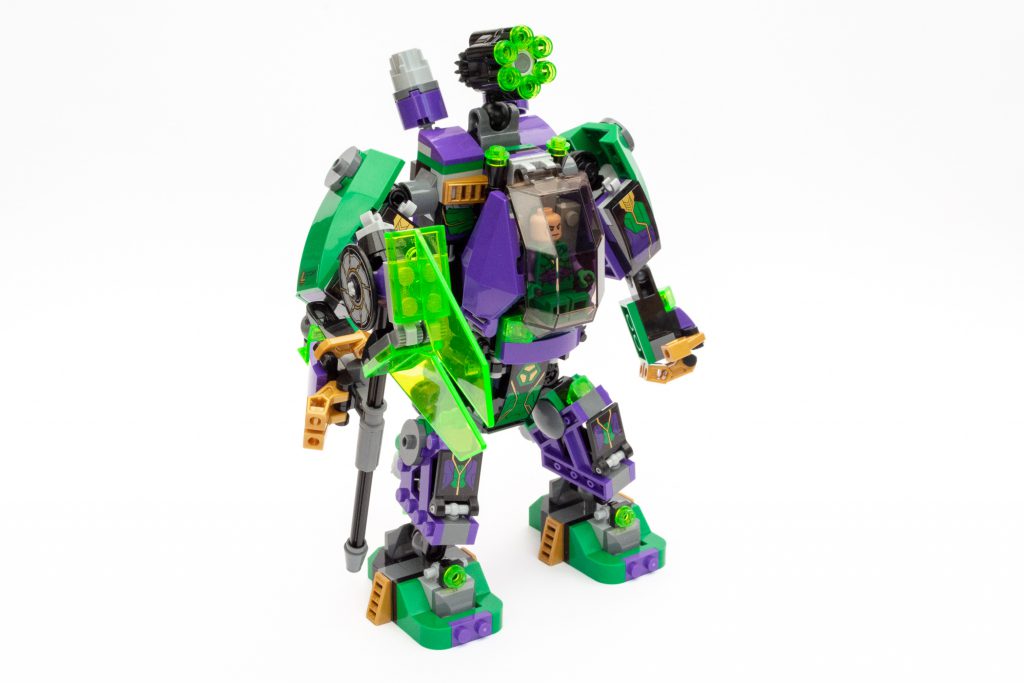 Fortunately, the reason you are going to buy the 76097 Lex Luthor Mech Takedown is not for the Batman glider. If you do pick this set up it could be for one of a number of reasons, but if it is because you are after a decent mech, you won’t be disappointed.

The build is broken up into sub-sections, starting with the control pod where Lex Luthor will sit. Carefully coordinated with the minifigure’s outfit, the green and purple looks good and a well-placed sticker for the inside adds a bit of extra detail. It is also equipped with some handguns either side which might be more for greebling than protection, but can be easily detached should you wish. 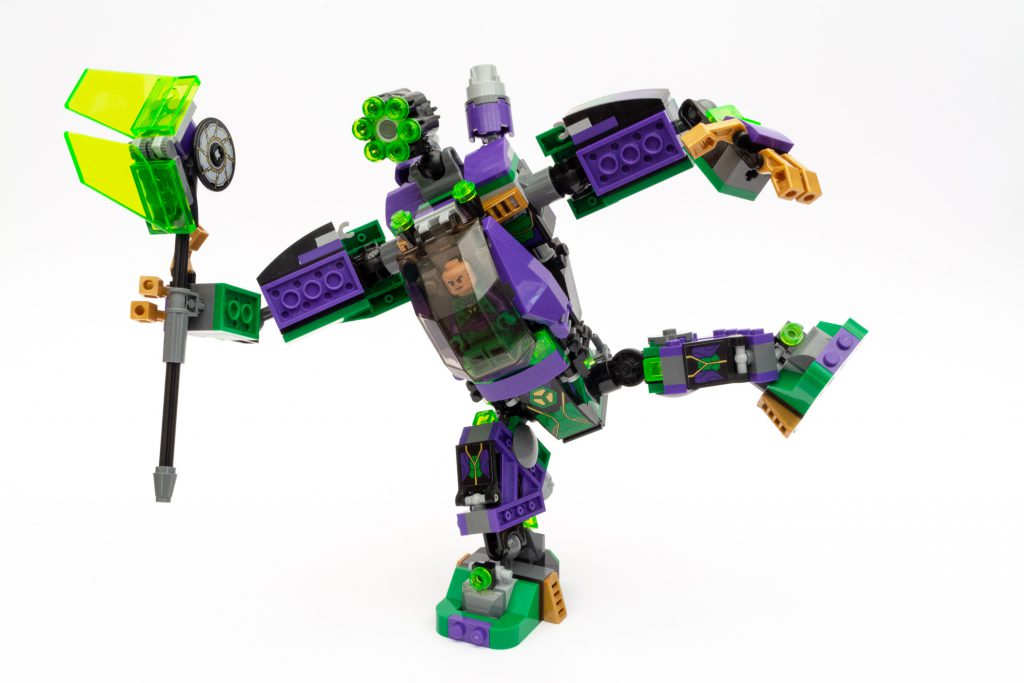 Following on, you start to build the main body which the control pod will eventually attach to, along with a pair of legs and a pair of arms. If you are not accustomed to mechs then you will find some interesting techniques here making great use of some sideways building and SNOT design. Given the nature of a mech having two lots of appendages, there is some repetition, but you can easily build some of the components simultaneously to save yourself some time at each stage.

Once the vehicle is standing upright the final parts are added to its defences, which include a multi-stud blaster canon and a giant axe weapon.

Only when everything is where it should be can you appreciate just how well made this set is. Whilst the knees aren’t bendable, everything else can be moved, twisted and rotated – and yet the mech is so sturdy it simply won’t collapse on you. This is superb and has probably been incredibly well-tested with children. I posed it in a variety of ways to test it and every time it felt completely secure. Kudos to the LEGO designer behind this beast.

This is the biggest set of the wave and by far the best. You get five excellent minifigures that are either entirely new characters or newly designed, as well as a smaller build and a very impressive mech. Full of playability, decent parts pack for MOCs and easily displayed on a desk, I’d say if there’s one super hero set you shouldn’t miss, it’s this one.