Every previous LEGO Disney set featuring the Little Mermaid has been, to borrow a phrase from Sebastien, ‘under the sea’. With a fresh pair of legs hidden beneath a voluminous dress, the red haired princess is now very much on deck – so is this a voyage worth taking?

Inspired by the end of the classic Disney animated feature, The Little Mermaid, 41153 Ariel’s Royal Celebration Boat offers an idyllic vessel for Ariel and Prince Eric to sail away on. Focusing more on offering what fans of the Disney Princess brand expect than movie accuracy, the LEGO designers were able to take plenty of liberty when producing the first set that features Ariel as a human rather than a mermaid.

The LEGO Group sometimes chooses to link all the sets within a theme using a certain category of feature. A prime example was the Alpha Team theme, with one wave incorporating a transforming feature into every set. Generally speaking, this is a great idea as it creates a greater cohesion among the sets – yet it seems that there is always at least one model that the gimmick does not work very well for. In the 2018 wave of the LEGO Disney theme, which sees a modular design approach applied across the sets, 41153 is the disappointing build that sees the high concept take from the model rather than adding to it. 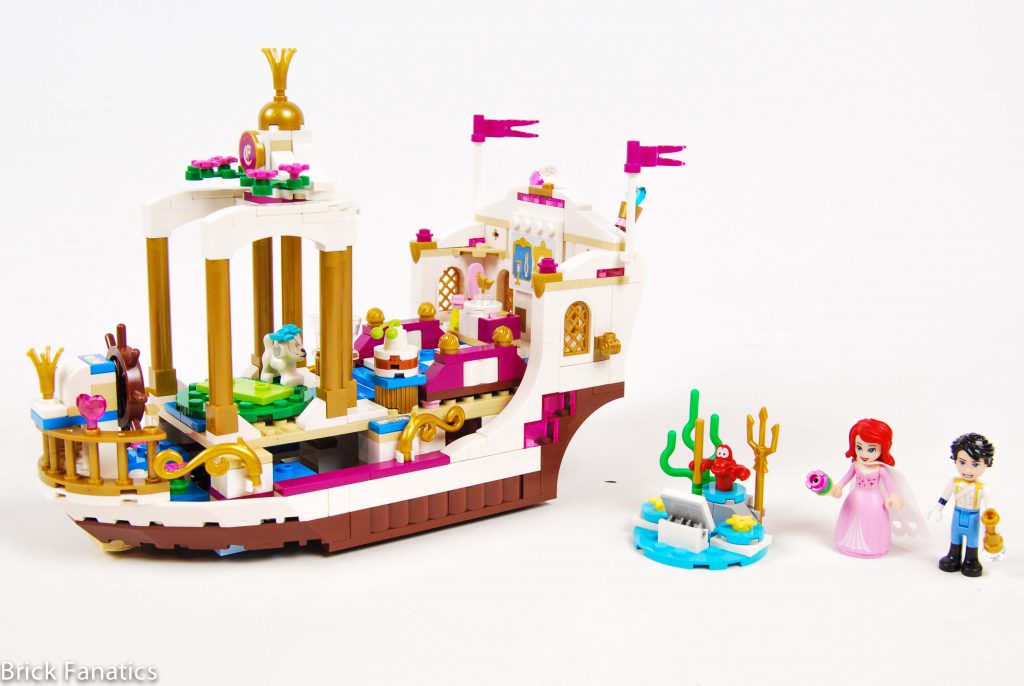 I love LEGO ships, so went into this build really hoping to love this set. Unfortunately, the experience ended up being super weird. The reason for this is that both deck pieces are designed to be removed and used as a pergola and small bridge. For whatever reason, the pergola contains a rotating dance floor – which would not be without precedent by itself – but choosing to make it green gives the impression that the boat is sailing around with a patch of grass on it. The small bridge forms a partial deck when in place, but due to it being removable, means the ship lacks a rear cabin despite implying one is present. On top of that, the bridge is quite boring all by itself and does not join smoothly to the super castle that can be constructed by combining all of the Disney sets in this latest range.

The whole model feels jumbled both in construction and colour. Removing the modular sections leaves what amounts to an empty shell, essentially just a hull. The modules themselves are not really fun to play with or even interesting on their own. This is extremely unfortunate as the idea of a ship within the Disney Princess line is a really cool one. It really is a shame that this set tries to do everything, and ends up doing nothing well. A few nice parts in pearl gold are the only saving grace in what is otherwise a real mess. Those pieces are not enough alone to recommend the set though, as all of the worthwhile parts can easily be had much cheaper from third party sites.

These mini-dolls might be enough to persuade some dedicated collectors to pick up this release. Ariel sports the still uncommon large dress component, here in pink for the first time, and this version of Prince Eric is also new. Sebastian is always a favourite, especially as he fits right in with both mini-dolls and minifigures. For most fans though, these characters are not enough to make this set worth purchasing.

The fundamental problem with this set is that the model is just quite ugly overall. Thankfully, the modules that are included in 41153 Ariel’s Royal Celebration Boat are not sorely missed when constructing a super castle, so those looking to combine the sets can still skip this one.

In case it is not clear already, this set feels like a lost opportunity. The LEGO Group has logged some amazing vessels through the years in Pirates, NINJAGO and even Friends. The lessons learned and techniques perfected in those other themes did not get a chance to translate to this set, seemingly due to the requirement for the modular sections to be certain a size so they can be connected to the other sets. That requirement undermined the ability of 41153 Ariel’s Royal Celebration Boat to focus on being a satisfying ship, making it the most poorly executed set in the Disney theme this year.