Frozen is one of Disney’s biggest recent success stories, with several LEGO sets based on the animated hit. 41155 Elsa’s Market Adventure claims the title of smallest set to include the titular Elsa, but does it have anything else going for it?

41155 Elsa’s Market Adventure is the latest set based on the Disney smash hit and instant Christmas classic, Frozen. For the LEGO Group that has means the collection inspired by the film now totals seven sets, three of which have been some version of a castle, either the one in Arendelle or Elsa’s mountain fortress. These top billed sets have been the only opportunity to procure Elsa’s mini-doll version to date (and as doll sales showed when the movie was released, it is Elsa who the kiddos want the most). Now, after Anna got an inexpensive acquisition opportunity with 41147 Anna’s Snow Adventure, Elsa gets her turn in 41155 Elsa’s Market Adventure. 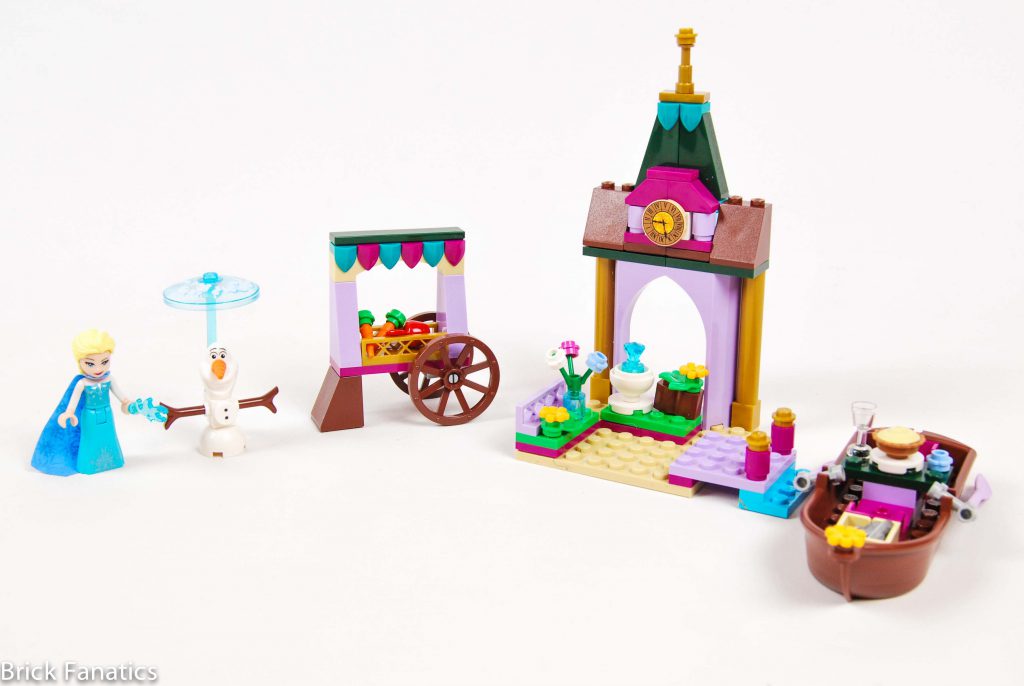 This set is intended to depict a scene from the short film Frozen Fever, that sees Elsa trying to collect all of the necessary supplies for Anna’s surprise birthday party. Not a lot of scenery could be included with this set thanks to the price point, and due to the LEGO Disney theme this year having a modular system across all of the sets. Essentially a cart, portion of a city street and a rowboat round out this glorified minifigure pack. These superfluous models are the main problem with 41155 Elsa’s Market Adventure. They have to be here in order to justify the price point, but they add almost nothing of value. The city street is nothing more than a short clock tower, and the cart does not even have a handle to be pushed around.

This set is worth it for the figures, but the price point, coupled with the utter lack of value in anything else included, makes it a stretch. Don’t get me wrong, Elsa is striking here with her fabulous cape and Olaf’s little cloud is equally well done, but the set is trying to be more than a Frozen Battle (Party?) Pack and on that front it fails. Paired with last year’s 41147, which included Anna, makes for a nice complete collection of figures, but that set’s stable and hut  builds were eminently more usable than the structures included here.

You should grab this set if you still do not have Elsa or Olaf, but otherwise it is an easy pass. None of the parts included, save the printed clock and large transparent snowflake, are rare, nor is the set good for display. If you already have an older version of Elsa then the cape alone makes this set tempting, but if you can stand not having that, then previous versions are not that much different.