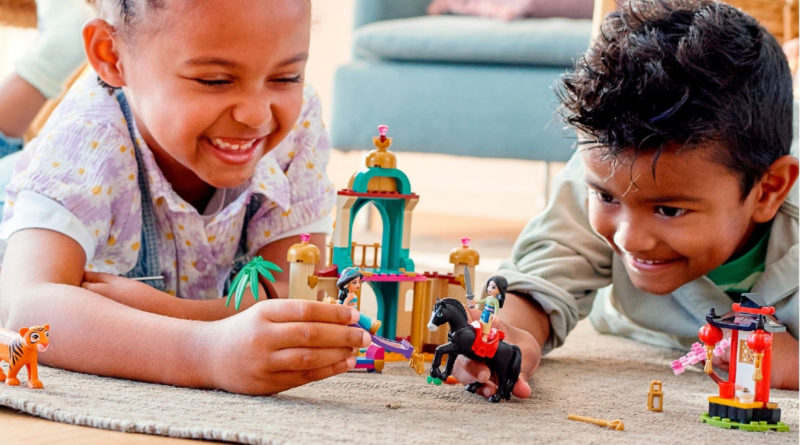 You can currently make a 30% saving on 43208 Jasmine and Mulan’s Adventure, a desirable set in the 2022 LEGO Disney range.

While it’s branched out a bit over the last few years, the LEGO Disney theme still loves its princess sets. Even without major film releases to accompany them, classic characters like Cinderella, Aurora and Jasmine have all popped up in new LEGO sets fairly recently. 43208 Jasmine and Mulan’s Adventure continues another trend – including characters from multiple Disney films in a single set.

The centrepiece of the set is a shrunk-down version of Agrabah’s palace, which includes a dining area and a balcony. Several accessories are also included – the Genie’s lamp, Jafar’s staff and even a rideable Carpet build.

Mulan, meanwhile, receives a small build inspired by Chinese architecture. Two new chopstick elements can be found here, adding a welcome touch of detail to any LEGO scene. Khan the horse, Rajah the tiger and Cri-Kee the cricket make an appearance in this set as well.

As part of a broader sale, shopDisney UK are selling the set for £24.49 – about £10 off the RRP. This is an impressive discount on a relatively new set, and we recommend snapping it up as soon as possible.

Keep in mind you will be charged £3.95 for postage if you buy the set on its own. However, with several other LEGO sets on the site (none of which are discounted, admittedly) you may finding hitting the £50 threshold fairly simple.

If your tastes run a little more expensive, you can also purchase 43197 The Ice Castle (and a few other sets) at a discount on LEGO.com for the time being.