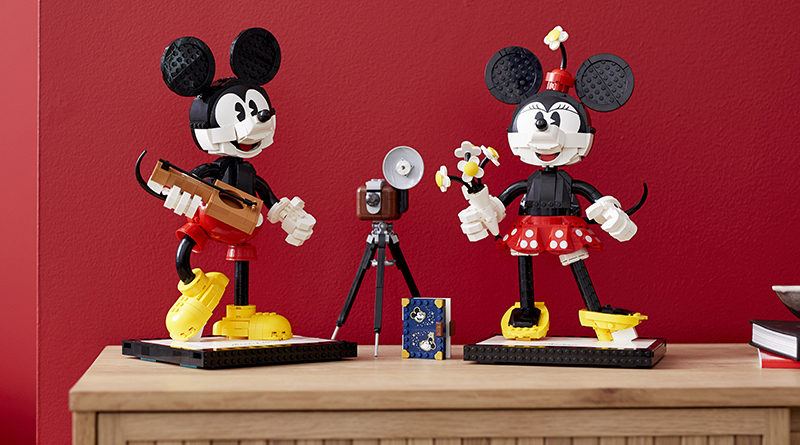 The latest LEGO Disney set for adults has been announced, with 43179 Mickey Mouse and Minnie Mouse Buildable Characters offering a new take on the iconic characters. With an impressive piece count, the set has also entered the five largest LEGO Disney sets list.

Read on to find out where this new LEGO take on Mickey and Minnie Mouse has landed on the list, now that is has knocked 41154 Cinderella’s Dream Castle out of the top five…

Poor Cinderella’s Fairy Godmother was working overtime for this princess, not only creating her ballgown and carriage but also a romantic honeymoon location. 41055 Cinderella’s Romantic Castle is packed inside from floor to rafters with accessories, including a rotating dance-floor, garden party complete with LEGO cakes and even a swing that could have been inspired by the famous painting by Jean-Honoré Fragonard (in which the girl also loses a slipper).

41055 Cinderella’s Romantic Castle was the first castle released in this theme, and even now, six years later, remains one of the best at this scale.

The five largest ever LEGO sets

It seems that the LEGO Group couldn’t let it go with 41148 Elsa’s Magical Ice Castle, which was the only LEGO Disney set to be re-released with no alterations as 43172 Elsa’s Magical Ice Palace 2019. It is a fantastic snowy recreation of the palace Elsa created in the film, using plenty of trans-blue to imitate ice, along with stickers to depict magical crystal patterns. It certainly takes some creative license with the LEGO slide element, but that just adds to the fun of the set.

It is also the only LEGO Frozen set to come with Elsa’s door bouncer Marshmallow, brilliantly brick-built and fully poseable through the use of several ball-joint pieces.

The most famous couple in showbusiness are presented as large scale figures in this set, inspired by their look in the Mickey Mouse shorts. Offering a beautiful display piece and eschewing the minifigures, 43179 Mickey Mouse and Minnie Mouse Buildable Characters provides something entirely new in the theme.

Featuring their distinctive colours and retro accessories, the duo are instantly recognisable. The models even features references inside the builds, with the internal colours carefully selected to reflect outfits the pair have worn over the years.

Taking the piece count almost as high as Thunder Mountain, 71044 is based on the instantly recognisable locomotive and station from the entrance to Disneyland in California. Practically every detail, no matter how small, is included in 71044 Disney Train & Station, from trash cans in the waiting room to plush armchairs in the train cars, and even a sneaky micro-scale reference to 71040.

Although this is a fantastic build that surprisingly never gets repetitive, what really steals the show is the fantastic selection of minifigures, particularly the debut of clumsy Goofy in his signature floppy green cap and orange waistcoat, who finally completes the Mickey Mouse gang.

Before 2016, all LEGO Disney sets had been small and aimed at young fans solely for play purposes. Then along came 71040 The Disney Castle, which takes the piece count to infinity and beyond, whilst also placing it as the thirteenth largest LEGO set of all time (or tenth, eleventh, twelth – depending how you define ‘LEGO set’).

Everything about 71040 is bold yet elegant, just like its real world counterpart. However good it looks on the outside though, it is the interior that makes it so much fun to build. Many of the classic Disney animated features, and even a few modern ones, are referenced in some way, all finished off with a sprinkling of pixie dust in the form of a sparkling minifigure Tinker Bell.