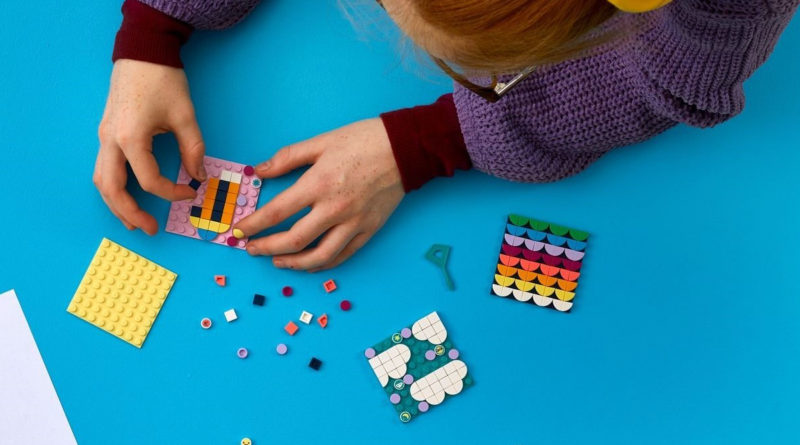 Since launching back in 2020, LEGO DOTS sets appear to have struck a chord with the LEGO Group’s target audience. The range of bracelets, photo frames and storage boxes allows LEGO fans to really express themselves – and carry their creativity with them into new environments. 2022 has continued to build on that momentum with new bag tags, message boards and adhesive patches.

It’s these patches that may have gone overlooked by older LEGO fans (unsurprising, since the DOTS theme definitely skews towards the younger crowd). These elements effectively function as tiny 8×8 baseplates; they appear to have a similar thickness to the baseplates in the Classic theme, such as 11026 White Baseplate.

This means that if you’re still building with baseplates in your custom builds, these new elements could be extremely useful. They may allow you to augment existing baseplates to create irregular baseplate shapes – which obviously has its advantages – or augment them more simply (if you want to create a small stretch of water or desert, for instance). Their 8×8 stud footprint means they’re eminently compatible with existing LEGO baseplates, which currently come in 32×32 stud and 48×48 stud sizes.

If you’re feeling even more daring, you can use the adhesive backing of the patches to stick them at odd angles to a LEGO build. Of course, this isn’t a ‘legal’ building technique and may cause more problems than it solves.

So far, six different colours of adhesive patch are available: black, turquoise, yellow, orange, dark blue and pink. The black patch is available in 41954 Adhesive Patch, while the other colours can be found in 41957 Adhesive Patches Mega Pack. A pink patch also appears to be available in 41961 Designer Toolkit – Patterns.

We suspect the patch elements themselves will be quite sought after once these sets retire, so don’t be afraid to give them a look now. If these sets don’t take your fancy, a possible Disney-themed DOTS set may give you other options to work with.