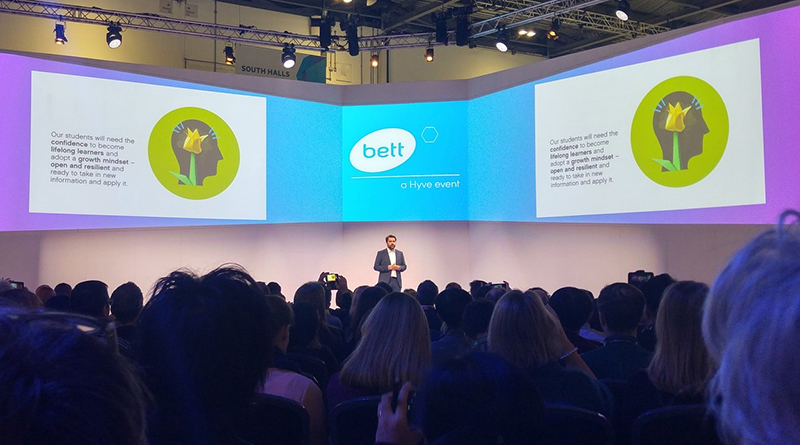 Attendees from around the world descended on London for Bett 2020, the education technology conference. There, LEGO Education President Esben Staerk delivered the keynote address on Thursday, January 23 with the title: ‘Ready for the AI revolution? Why confidence in STEAM learning is key to career opportunities in the age of automation’.

His speech coincides with LEGO Education turning 40 years old and the launch of SPIKE Prime, the new product for schools that encourages children to get hands-on with coding. Rather than just turning up to sell this latest product though, he is discussing the future of learning and the skills that children – and adults – will need.

The LEGO Education President shared the statistic that 50% of jobs will be automatable as AI (artificial intelligence) plays a greater place in the workplace. “That means that the destination we are shaping students for is becoming less and less clear. Not surprisingly, certain job categories, particularly the job category of technology professionals, will grow proportionately … Predictable jobs, rule based jobs, and not least physical jobs will decline.”

He explained that this will not just affect teaching in the school environment, but will lead to people needing to become lifelong learners:

“That means that not just for students today, but for people in the workforce today, there is a need to change job categories. So between 75 and 375 million people globally will already, over the next 10 years, need to change jobs. And that rate of change and that rate of learning in the job is not going to go down. So the future that we are shaping students for is one where there is an unprecedented rate of learning needed, not just in school, but even more so after they have graduated, in the job.”

Given that Staerk was speaking at a technology conference, the focus was on looking at the future and solutions to this challenge. A slide summing up the approach read: “Building knowledge is always going to be important …but developing complementary skills and knowledge will be crucial.”

These skills were identified as including complex problem solving, critical thinking, creativity, collaboration, emotional intelligence and resilience.
He shared the striking statistic from a Harris Poll, conducted over six countries, that 47% of children avoid subjects that they have failed in before, while 51% say that trying new things at school makes them nervous.

In contrast, 95% of educators believe that the best way to build confidence in STEAM (Science, Technology, Engineering, Art and Mathematics) is working on hands-on projects with others.

“The research also found was that students who were confident in STEAM subjects where they are faced with challenges and they work their way through and they iterate etcetera, were much more than twice as likely to be confident in school today,” Staerk said.

This is where he brought in the notion of hands-on learning, that for the LEGO Group is best done through ‘learning through play’. Staerk cited LEGO Foundation research that found students learning through play were actively engaged, finding it joyful and meaningful. He added that students became more resilient through failure, retain knowledge better and become more curious.

“If we combine hands-on learning with a basis of learning through play in the area of STEAM we will equip students with key knowledge with the key complementary skills that are uniquely human, that will not be replaced by AI.”

He declared that this will lead to students becoming employees who embrace change, do not fear failure and are willing to get things right by making mistakes.

The LEGO Group’s ‘learning through play’ concept is often associated with young children, but he explained that it is intended for older children too. Rather than just being about literal play, it is about what play leads to – experimental, investigative learning. It is not simply about students leading the activity, with teachers guiding the activity as well as facilitating the children’s learning.

To help discuss how students could be better prepared for the pace of change in schools today, the LEGO Education head invited Lord Jim Knight, Former Minister for Schools for the United Kingdom, to the stage.

“I think we have a particular problem here in the UK where we have known for a long time that science and maths are really important for future careers, but we have become infatuated with the pure academic of science and maths and we talk about STEM, but it has just become S&M,” Knight explained. He highlighted the importance of Design and Technology subjects for creativity and soft skills, which currently are not focused on in the curriculum.

Referring specifically to the UK, he said: “We have done something in the way we educate our kids that they are terrified of failure. Yet as you said Esben, in the workplace we need people who will learn, they will fail, they will learn from that failure, they will maybe fail again but then they will succeed. That is how you do things right rather as opposed to not doing things wrong. It is only when we have people doing more things right that we create value and we build.

“Policymakers need to catch up and smell the coffee.”

The LEGO Education President concluded by suggesting that rather than waiting for systemic change, educators can attempt to find small ways of incorporating hands-on learning into the school day. Making coding hands-on, making activities collaborative, creating problem solving opportunities were some of his suggestions.

Staerk said: “We will enable student success for their life by making them confident, life-long learners, not by chasing a technology or a particular technology destination but by equipping them with the skills to navigate a world where things change.”