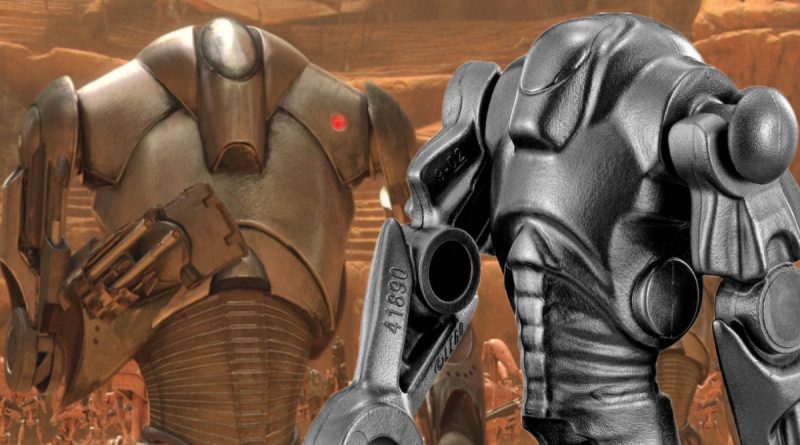 The LEGO Star Wars team has explained why we haven’t had a Super Battle Droid minifigure since 2015 – and why we might not see one for a while.

First introduced all the way back in 2002 for Attack of the Clones, then redesigned and updated in 2007 for 7654 Droids Battle Pack, the Super Battle Droid minifigure hasn’t appeared in a LEGO Star Wars set since 2015’s 75085 Hailfire Droid – despite ample opportunity to include the beefed-up Battle Droid in plenty of prequel trilogy sets over the past seven years.

The most recent of those arrived this summer in 75337 AT-TE Walker, which takes its cues from the Battle of Utapau in Revenge of the Sith. Both regular B1 and B2 droids were present on-screen, but the LEGO model only includes three standard Battle Droids, once again passing up the chance to reintroduce the Super Battle Droid. According to the LEGO Star Wars design team, that’s thanks to the minifigure’s inherent fragility.

“It might have been discussed at some point,” graphic designer Madison O’Neil told Solid Brix Studios. “I think the thing we always run into with the Super Battle Droids is the elements. We have the arms, the legs and the top – three separate element frames, essentially, to breathe some life back into that character.”

“It’s probably something that would require a redesign to some degree,” added LEGO Star Wars Creative Lead Jens Kronvold Frederiksen. “And here [in 75337 AT-TE Walker] we prioritised other things.”

If you’ve got any Super Battle Droids in your collection, chances are good that at least some of them won’t have stood the test of time: the clips that connect their arms and legs to their torso pieces are notorious for snapping, and it’s seemingly that issue that’s preventing the LEGO Star Wars team from simply slotting the existing Super Battle Droid design into its prequel trilogy sets.

The designers did concede that a full redesign from the ground up may not be entirely necessary, however, suggesting any future minifigures might not be totally out of sync with the rest of our collections.

“I don’t know if it would have to be [redesigned], but we’d be interested in doing it,” LEGO Star Wars Design Manager Michael Lee Stockwell said, before Frederiksen clarified: “The arms, because they snap, would obviously need some [reworking].”

None of these quotes specifically suggest a new Super Battle Droid minifigure is currently in the works, so it could still be a while before we see the return of the B2 to the LEGO Star Wars line-up, but one thing’s for sure: we’re definitely not going to see the 2007 design again. Fortunately, you can still pick them up relatively cheaply on BrickLink – just don’t expect them to stay in perfect condition forever…