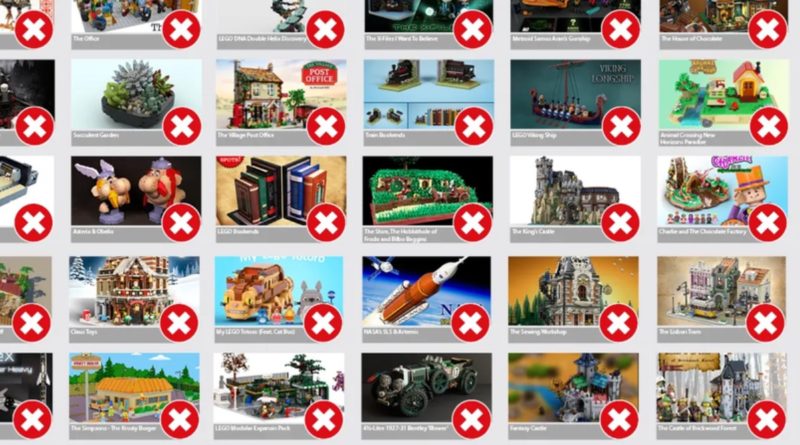 The LEGO Ideas team has explained why it ended up rejecting a record number of 10K projects in 2021.

The LEGO Group announced the results of three separate Ideas reviews across last year, involving a total of 117 different projects – all of which racked up the necessary 10,000 votes to reach the next stage on the crowdsourcing platform. Of those, only four were given the green light to become a future LEGO set, including The Starry Night, Motorized Lighthouse, Jazz Quartet and The Office.

For the other 113 projects, the journey effectively stopped there. For LEGO Ideas Design Manager Sam Johnson, that’s a daunting thing to tell not only the creators of those designs, but the masses of fans who’ve supported them on their path to 10,000 votes. But that’s exactly what he has to do in the video that accompanies each results announcement.

“It’s the scariest thing ever,” Sam tells Brick Fanatics. “This is my name on that video, my face telling everyone we’re not going to do it. And you put it into the terms of every [project] got 10,000 votes, 10,000 votes times 57, that’s like half a million people who are going to be disappointed that we didn’t make the set. [But] we’re trying to choose the best ones for us.

“I’d love to make 57 LEGO sets out of that review. That would just be the dream, that everyone who gets [to 10,000 votes], we actually get to make their LEGO set. But unfortunately, because of production constraints, and all the stuff that goes on behind the toy industry, we have a limited amount of LEGO sets we can make, which is why we have to choose.”

The record-breaking review Sam’s referring to was the first of 2021, which saw an overwhelming 57 different projects hit the 10K mark in a single qualification period. (That number was technically even higher, but one project was disqualified after the fact.) That escalation is a direct result of increased engagement with LEGO Ideas, which the team has previously attributed to the unique circumstances around the pandemic.

“When we started LEGO Ideas, we never anticipated that we would get 57 in one review,” Sam reflects. “We’ve been coping with 12 or 13 up to this point, and then 2019 changed a lot of that for us. Since then, we’ve been trying to work out, ‘How do we cope with this? And what is our criteria for choosing something?’

“We don’t want to just bump it up to 100,000 votes. That’s not the right thing to do, because we want everything to be accessible for people. And so it is daunting to say that we have to choose one, or possibly none. You know, that might even be the case, that there’s not one suitable.”

That was exactly the case in the first 2015 review, when all 13 projects were rejected by the LEGO Group. Four of those proposals – including the Titanic, International Space Station, giant T. rex and huge Frozen ice castle – have since been designed and launched as official sets, whether through Ideas or elsewhere, while Alatariel Elensar’s Science Adventures was among the rejected projects in the second round of crowdfunding for the BrickLink Designer Program last year.

Ultimately, the decision to produce or not produce a set – or indeed, to reject the entire cohort – involves more interested parties than just the Ideas review board.

“The review is not just me and a couple of other people – it’s actually a global review,” Sam explains. “So there are people in different parts of the company in their respective markets; there’s someone sitting in Asia, someone’s in America, and they have their own perspective on what would be best for their area of the world. We also have LEGO retail; they have a say because it sits in the store. And the design management has a say, because it also has to fit in with the existing portfolio of products.

“We come a little bit later than everyone else in development, so a lot of the stuff for that year has already been developed. And we’re saying, ‘We could fill this gap,’ or ‘We have this opportunity that no one else has, so we can really take advantage of stuff.’ So that review stays essentially the same, but we’re looking at the global impact of choosing each one.”

As some fans have already clocked, one potential factor in that global impact – and what Sam’s referring to by an ‘opportunity’ to ‘take advantage of’ – is whether a licensed project is in the cultural spotlight for any reason, and whether that’s had any bearing on the timing of both the submission and it reaching the review stage.

“What’s the opportunity behind Home Alone?” Sam offers by way of example. “Is there a reason that got to 10,000 votes now? And then we see that it’s the 30th anniversary. That sounds pretty cool, I wonder what Disney is doing. It helps us to decide on what we’re going to do with this, if we choose it. And we’re looking for these kinds of opportunities all the time.

“It’s not to say that it has to be an anniversary or a movie release or something like that. Because then it might be the right time to relaunch Wild West. Who knows? There might be a gap or an opportunity for us to do something crazy, like the Motorized Lighthouse.

“That doesn’t really have any other reason than, ‘Wow, that looks like a really awesome LEGO set.’ We’d really like to try and see what it’d be like on a shelf and how it would work. It has to be motorised, because it’s called Motorized Lighthouse, so how do we now develop a set?”

Sandro Quattrini’s Motorized Lighthouse is one of seven LEGO Ideas sets currently in production, with Harry Finkel’s Snow White and the Seven Dwarfs project still under consideration. The next to hit shelves is expected to be Guillaume Roussel’s Earth Globe.

Another 36 projects have just qualified for the third and final 2021 review, while 34 more are currently being weighed up as part of the second 2021 review. It sets the scene for another busy year for LEGO Ideas, and one in which we’ll no doubt see dozens more projects rejected at the final hurdle – and, hopefully, at least a few approved for production.