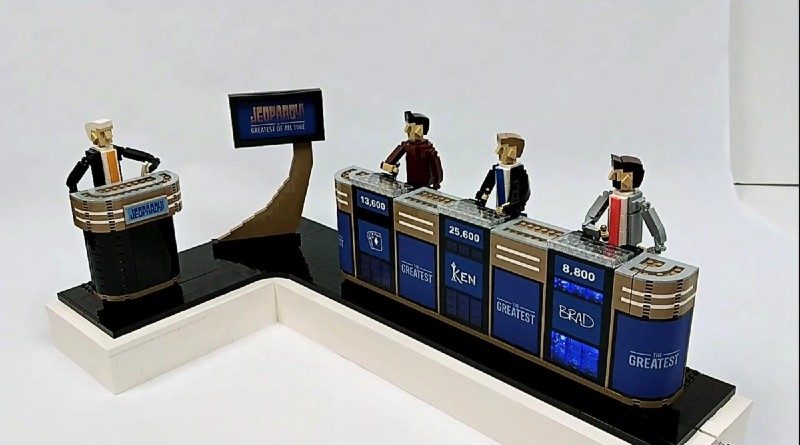 Paying tribute to the host of the popular game show Jeopardy!, one LEGO fan is remembering Alex Trebek in a literally moving model.

Douglas Hughes showcased the build on his YouTube channel, featuring brick–built figures of Alex Trebek, Brad Rutter and James Holzhauer. The model itself is a recreation of the set used in the game show, with a screen showing the logo for the show and stands for the four contestants and host.

Perhaps the most interesting part of the model though is its functions. The build is kinetic in that it moves the contestant’s hands to raise the microphones and rotates the host towards the screen, in the same way that they would in the game show. The stands even light up, indicating which contestant is answering first.

The whole model uses standard LEGO bricks, Technic, Power Functions and MINDSTORMS EV3 to allow it to move and be programmable to achieve as accurate a Jeopardy! experience as possible.

On BrickNerd, Douglas explains the process for creating this model including the sketches used to plan the layout of it. Ken Jennings, guest host of Jeopardy! has even shared his appreciation for the model on Twitter.

The LEGO Group have shared their own tribute to Alex Trebek in a recreation of the popular game show.