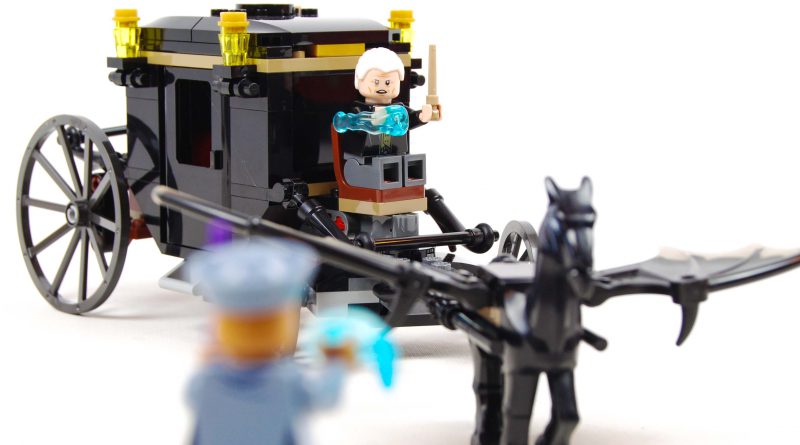 The only new Wizarding World of Harry Potter set based on Fantastic Beasts: The Crimes of Grindelwald, 75951 Grindelwald’s Escape offers a taste of the upcoming film

Previews have teased an epic showdown between Grindelwald and Newt Scamander in the new Wizarding World of Harry Potter movie, Fantastic Beasts: The Crimes of Grindelwald. One of the more dramatic scenes fans have seen glimpses of is the one in which Grindelwald flyies above the streets, escaping his prison, in a carriage drawn by Thestrals. 75951 Grindelwald’s Escape suggest that he may have to duel Seraphina Picquery during his bid for freedom. 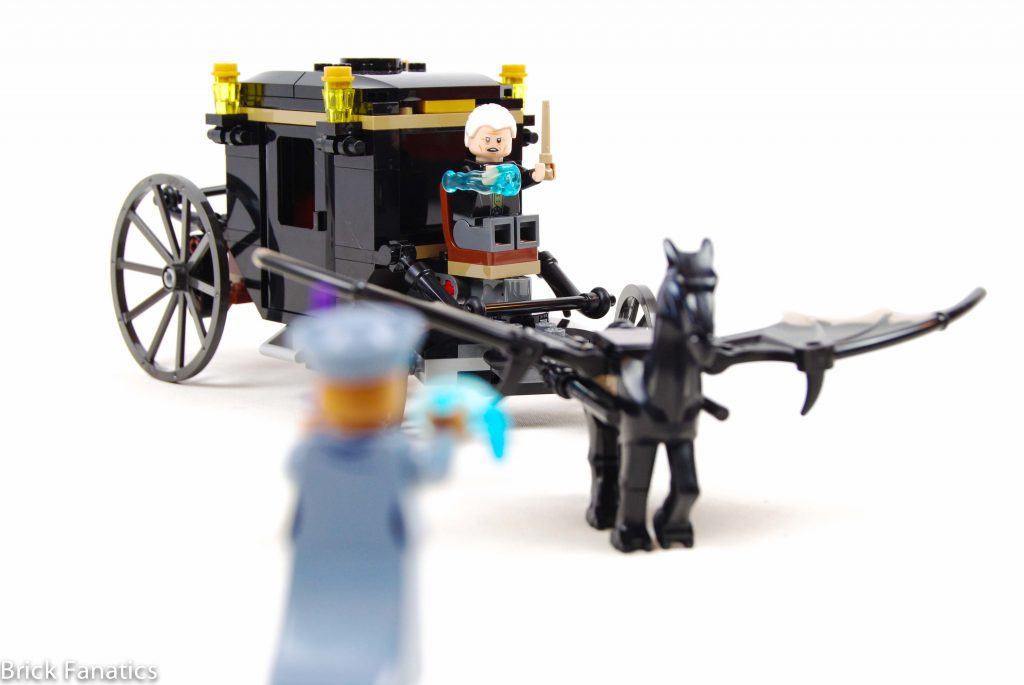 Carriages make fantastic lower price point sets. They are always limited in size and can therefore be executed well with a couple of hundred parts, are great fun to play with, and will usually supplement the other, larger sets of a theme nicely. 75951 Grindelwald’s Escape also has a sense of peril around it due to the characters included, though considering this is only the second of multiple films I imagine it will go poorly for Seraphina Picquery should this duel actually occur on-screen. The jet black carriage has ample room for a minifigure or two within it and the juxtaposition of the large and small wheels make for a very cool look.

The highlight of this set is undoubtedly the figures, including the exclusive Thestral. At this price point, the entire team of flying creatures pulling the on-screen carriage could not be included, but the undead beast is fabulous even if it is all on its own. Miniature dragon wings are perfectly scaled to the new horse-like mould.  Both Grindelwald and Picquery are a welcome inclusion though there is a bit of a miss with the latter. While her torso is highly detailed, the new swooping dress element features no printing and therefore the transition looks quite jarring. That shortchange on detail is unfortunately a recurring theme in 75951.

Carriages are difficult to capture in detail at this scale, but even when taking that into account the one here feels very plain. Without a single sticker or printed component the coach feels very basic, like just a box on wheels. It will be more than sufficient for play, but as a display piece it will need to be hidden toward the back in order to not draw unwanted attention to itself. A couple of fancier elements try their best to bring up the level of detail but they are insufficient. The LEGO Group has executed stagecoach type sets at this scale well before, 79108 from the short lived Lone Ranger line is an example of perfection. Notably, that set included a couple of well placed stickers which really upped the level of detail.

At this price point, a set this large in a licensed theme with two exclusive figures and a new moulded creature is nothing to scoff at. If it had to be done at the expense of some detail on figure printing and visual appeal on the carriage so be it – this set’s mission is to be a fun play accessory in the range of Wizarding World sets and in that regard it succeeds. It is just a little disappointing when recent examples exist of the concept having been executed much better.

75951 Grindelwald’s Escape is available now at shop.lego.com. You can help support Brick Fanatics’ work by using our affiliate links.