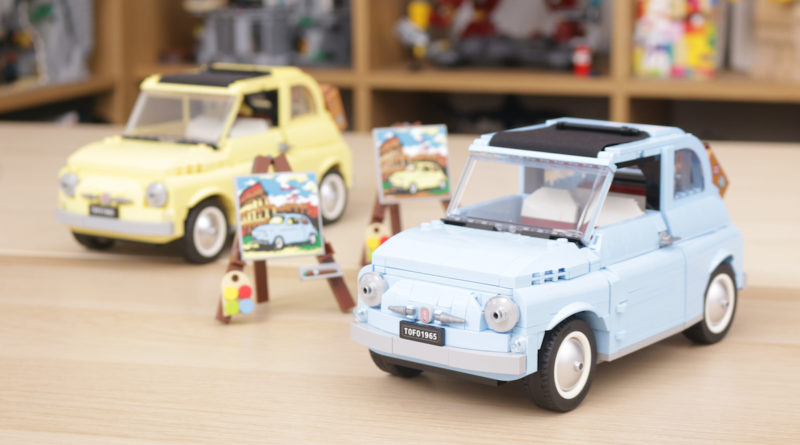 Let’s call it déjà-blue, then. As part of the LEGO Group’s intriguing pilot program from September 1 to November 30, 77942 Fiat 500 is a straight-up reissue of March 2020’s 10271 Fiat 500, just for the fact that where the original set came in cool yellow, the new version comes in light blue.

The LEGO Group’s trial – held exclusively in the UK – is seemingly in place to test the LEGO market’s preferences around the colour and size of particular sets on offer. The program includes the release of two differently-sized versions of 60215 Fire Station, in the form of 77943 Fire Station Starter Set and 77944 Fire Station Headquarters, two recolours of 31058 Mighty Dinosaurs as 77940 Mighty Dinosaurs and 77941 Mighty Dinosaurs (read our review of these here), and arguably the flagship model of the whole experiment, this new version of the Fiat 500.

Alongside apparently giving the company an insight into audience tastes around colour and size of LEGO sets, the scheme will also provide insight into buying practices in 2021, with each re-released set limited to their own nominated retailer, as well as LEGO Stores and LEGO.com.

The fire stations and Mighty Dinosaurs sets are split between Tesco and Smyths Toys, but the Fiat is an exclusive to The Hut Group’s online retailer Zavvi. While the scheme as a whole is limited to the UK market – and that counts the same for purchases of these particular sets at LEGO.com – Zavvi offers international shipping, providing one loophole for any overseas LEGO fans to pick up at least one of these rather unique sets.

But just how unique is 77942 Fiat 500, and has its release come out too late to really test people’s views on different colours?

10271 Fiat 500 released back in March 2020 and we took an in-depth look at its design and inspiration back then. Everything that we loved about the classic 1960s Italian car that was yellow we also now happen to love about the classic 1960s Italian car that is blue. 10271 Fiat 500 is a fun little Creator Expert set at a more affordable price, which celebrates all that the Fiat 500 embodies in practicality and iconic automobile design – and 18 months on from that original set’s release, the same is very much the case with 77942 Fiat 500.

Not every LEGO set – and this is very much with Creator Expert/LEGO for Adults in mind – has to be as big as a Colosseum or into three figures in price. 10271 Fiat 500 then and 77942 Fiat 500 now is a perfect example of how a shorter, smaller LEGO set can still make for an intriguing, intuitive build process and a neat display piece.

Between the two sets, the only differences are aesthetic and primarily only in colour. Curiously, though, where 77940 Mighty Dinosaurs and 77941 Mighty Dinosaurs represent complete recolours of the entire palette of 31058 Mighty Dinosaurs, only the one colour has been changed between 10271 Fiat 500 and 77942 Fiat 500 – the yellow into blue.

The seating, chassis and other details around the bumpers have all been kept to the same colours as before, with only every piece that was light yellow now changed to a light blue. Generally, the stickers have also just had a recolour from yellow to blue – including the painting of the car. However, it is on that sticker sheet that there is one actual difference between the sets to be found, in the inclusion on one of the three travel-case stickers of a little Union Jack flag, as a nod to the pilot program that the set is a part of.

Aside from that small detail, the difference between 10271 Fiat 500 and 77942 Fiat 500 is a singular colour change that is expected, but still a curiosity to consider. Of course, the details that won’t have changed in colour between versions of the real car won’t then be changed in colour between versions of the LEGO set – why would they? But at the same time, changing just the one colour in this set does mean that within the wider UK pilot program, the most expensive – and arguably flagship – set has had the simplest, dullest change made to it.

It raises a question to ask of this potential direction in set design that the LEGO Group is considering. How widespread in the LEGO catalogue do you want a choice in colour to go? To every set that the company will release? We have also reviewed the two recolours of 31058 Mighty Dinosaurs and with delight for how both 77940 Mighty Dinosaurs and 77941 Mighty Dinosaurs have taken the same model and, with a completely new palette of colours applied across the entire selection of pieces, have each managed to create completely different interpretations and identities of what is otherwise, on paper, just the same set again.

What was transformative for that one LEGO set, though, isn’t quite the same in this case – and as a recolour of 10271 Fiat 500, 77942 Fiat 500 very much does feel like just the same set again. It’s not a criticism as such, just a reality of how some LEGO sets will look and behave in new colours. Where some can and will take on a completely new feel and context, others will very much feel inconsequentially different, and really more of the same.

Which leads us to the point raised in our introduction: has this particular set come out too late to really serve as a true reflection of colour preference? If 77942 Fiat 500 had released closer in time to 10271 Fiat 500 then it could truly be such an experiment – here is otherwise just the same set offering the same experience and same final model, with the only choice to consider the colour it comes in.

Yet, it’s 18 months since 10271 Fiat 500 was released and it is more reasonable to assume that anyone interested in picking up a nifty LEGO interpretation of the Fiat 500 will likely have already done so by now, in yellow. Completists to one side, how many who already have that original version will be genuinely tempted to pay for and build the same thing again, and how many who weren’t pulled in by the original will be that swayed by colour to pick this one up?

The colour switch just doesn’t have the same dynamic twist as we see in the Mighty Dinosaurs sets. Having the Fiat 500 in two colours and next to each other on display does look pretty nice, but for most with just a passing interest in the subject material it also doesn’t stretch beyond anything more than a curiosity.

As you would hope, 77942 Fiat 500 is priced identically to 10271 Fiat 500, at £74.99. It’s a fair price and serves as a much better entry point into the more advanced Creator Expert/LEGO for Adults line than a lot of the other products currently available. While the car doesn’t steer, it has enough functionality and detail both inside and out to serve as a great little LEGO set and one at a more than decent price.

The LEGO Group’s pilot program is unusual in so many ways, not least for why it is carrying out market research in the market, rather than during the development stage. Recolouring some LEGO sets will make for interesting choices and dynamic shifts in style and design. Recolouring other sets, though, will more likely just throw up the simplest choice based on personal preference – red or blue? Black or white? Light yellow or light blue?

As designer Mike Psiaki said in conversation with us, the Creator Expert/LEGO for Adults team were considering the light blue model of the Fiat all the way along the design process until the very end, but ultimately had to pick one and went with the yellow version for 10271 Fiat 500. They made that choice for specific reasons and there are no complaints for how and why – it’s part of the development that every LEGO model goes through, and it’s a choice sometimes easy, sometimes hard, but that has always previously been made by those with the years of design experience and market research at the LEGO Group.

So, it certainly makes for a very interesting situation to now – 18 months on – be presented with the light blue option on shelves in the form of 77942 Fiat 500. But where the choice between the three different – and they are completely different – colour versions of the Mighty Dinosaurs set does feel like a dilemma worthy of the market having a fun and involved say in, the choice between a yellow or blue Fiat 500 feels too inconsequential to have gotten this far.

Support the work that Brick Fanatics does by purchasing your LEGO through one of our affiliate links with LEGO or with Zavvi, who have the retailer exclusive on this set.

Enjoy the process and it takes three or four hours to put together 77942 Fiat 500, a little less if you want to rush through, or are a little bored of the repetition if you’ve previously built the identical (except for colour) 10271 Fiat 500.

There are 960 pieces included in 77942 Fiat 500, interestingly split across just three rounds of numbered bags. 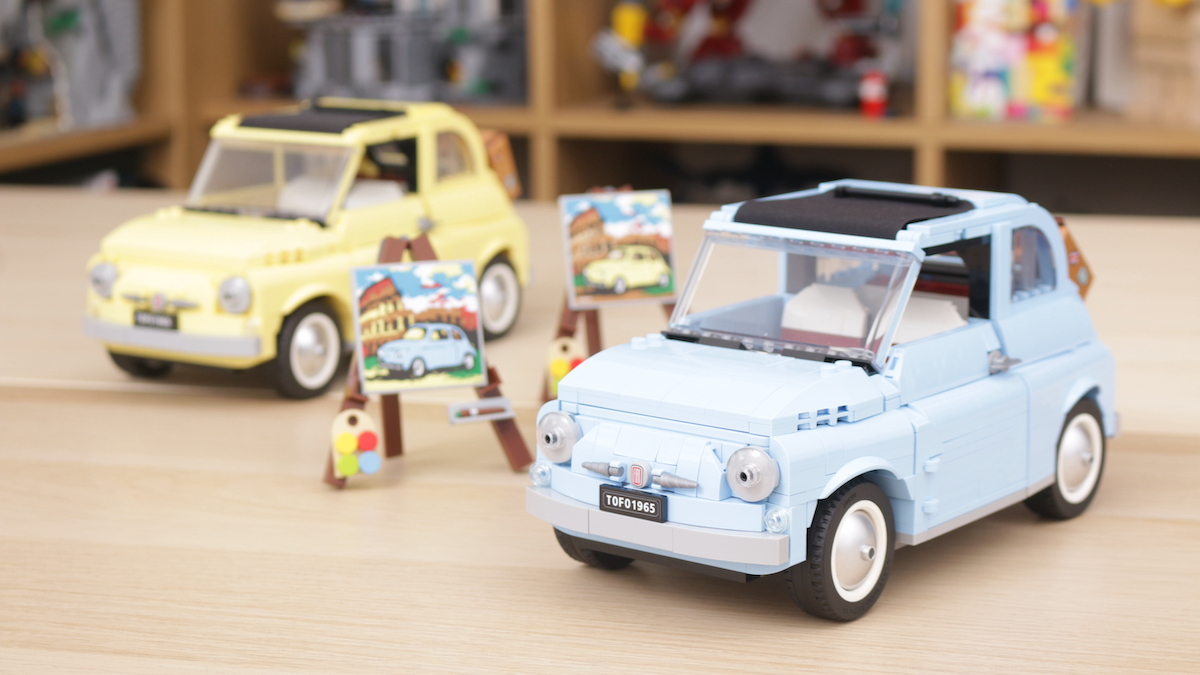