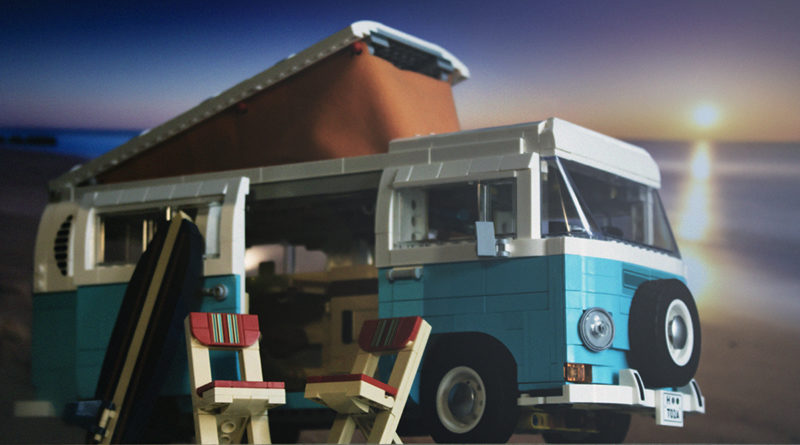 LEGO for Adults 10279 Volkswagen T2 Camper Van is a super-accurate recreation of the real-life vehicle – for better and worse.

The Volkswagen T2 Camper Van achieved its cult-like status thanks to its popularity among the countercultures of the 1960s and ’70s. It was easy to maintain, comfortable for large groups to travel in, and offered freedom like no other vehicle.

In its heyday it was a common sight at music festivals and surfing beaches all around the world, and is still a much-loved and popular vehicle to this day – even if it does have a reputation for not being the most reliable of machines.

10279 Volkswagen T2 Camper Van boasts an impressive 2,207 parts, making it the second-largest vehicle to be released in the LEGO for Adults (formerly Creator Expert) subtheme, coming in at roughly 150 fewer parts than the largest model, 10274 Ghostbusters ECTO-1.

With each passing year the level of quality, building techniques, parts usage and accuracy seen in LEGO for Adults models have all improved – so let’s hope this Camper Van is worth the trip.

The LEGO Group and Volkswagen have had a surprisingly long history. The company first began producing toys with the famous VW branding as far back as 1957, predating the LEGO System by one year. Skip forward to 2008, and after winning a fan vote, the very first large-scale LEGO Creator car model produced was 10187 Volkswagen Beetle.

Since then, fans have been treated to brick-built renditions of Beetles and Camper Vans of varying accuracy and size. It’s a love affair that’s lasted years, and all signs point to this latest iteration being the most detailed and authentic model yet.

Before diving into the build, it’s worth noting – yet again – the box art. The now-ubiquitous black packaging that accompanies every single 18+ set is starting to get a little tired. A set like this could have benefited from the Camper Van in situ on a beach, with the sun setting in the background and the accompanying camping chairs and surfboard laid out alongside.

It would have set the mood for the model beautifully, but instead it’s the same old box art that fans have been presented with for well over a year and a half now. Snooze.

The T2 Camper Van is not the most attractive of vehicles – it’s undeniably iconic, but it hasn’t got the sleek and sexy curves of, say, a Porsche 911 or an Aston Martin DB5, or even the quirky body shape of a VW Beetle. For much of the opening stages you’ll be building a very blocky and square framework, and when compared to the likes of 10295 Porsche 911 and 10265 Ford Mustang, this just isn’t as enjoyable to put together.

At times it feels laborious rather than engaging, and there aren’t really that many moments of inspiration when it comes to the techniques employed. There are pockets of brilliance – the engine is a decent sub-assembly, the front and rear bumpers look excellent, and the front windscreen section looks perfect – but for the majority of the time it feels like a chore to construct, and that’s something LEGO should never be.

It’s also one of the most temperamental and fragile LEGO vehicles you are ever likely to build. The exterior features include opening driver and passenger doors, a sliding side door (operated by a small button underneath the chassis) and a rear door and small boot. They look good, but feel very flimsy, and attaching them isn’t that enjoyable either. Bits regularly fall off with the slightest of touches, which is often more frustrating than fun.

It’s a set that will probably have you questioning your skills as a LEGO builder – surely a LEGO set can’t be this fragile; surely a mistake must have been made along the way? But when the front bumper, rear bumper, engine, rear boot and pop-up roof are all prone to having parts breaking off or simply falling to pieces, something has definitely gone wrong in the design process.

The build does offer some enjoyment when the interior details are added. The kitchen unit itself is a very satisfying sub-assembly, utilising a number of 2×2 and 1×2 brackets. It comes fully stocked with drinks and snacks, and includes a refrigerator, gas stove, sink and kettle – the parts usage for which is particularly inspired.

They not only look authentic, but the interior elements also function as they would inside a real VW Camper Van. The cupboards open, the table swings out and folds away and the ‘rock and roll’ bed (named because of the way it rocks and then rolls out into position) both rocks and rolls the way it should. It adds a nice layer of accuracy to the model, especially with the addition of fabric curtains adorning the windows.

The pop-up roof is a surprisingly complex sub-assembly, constructed using a Technic frame with shock absorbers and beams that create the ‘popping’ action of the roof. Tiles and curved tiles are then used to cover the top, before a large fabric piece is added to finish it off. When raised it adds so much to the final look of the set – just don’t expect to be lowering and raising it too often. Choose one look and keep it that way.

Applying the various tiles around the sides is at least a more satisfying process. The medium azure and white colour scheme is vibrant and authentic, and the shaping, as blocky as it is, is pretty spot on. The studs-not-on-top techniques used throughout also combine to create a very decent-looking model.

Surprisingly, the most enjoyable part of the build is actually the brick-built accessories – a dark blue, dark orange and tan surfboard, and two folding camping chairs – which are wonderful little builds, with an ingenious technique built in for the folding mechanism. They are simple but perfectly executed, fit incredibly snuggly into a space in the roof and make for a really fun way to end the build. It’s just a shame there aren’t more moments like this spread across the entire set.

Saying that, on its own with the roof down, it’s not exactly the most attractive LEGO vehicle ever – but pop the roof, open the side door, lean the surfboard against the van and unfold the camping chairs and the whole thing immediately conjures up images of road trips and surfing holidays.

It’s by far the best way to display the set – just remember not to touch it, or breathe on it, or even look at it the wrong way, for fear the whole thing will just collapse into a heap of disassembled bricks.

As is standard practice for LEGO for Adults vehicle sets, no minifigures are included. However, 10279 Volkswagen T2 Camper Van does come with a few accessories that inspire images of holidaymakers, including two folding camping chairs and a surfboard.

That being said, the build experience for all three of those sets was way higher than what is on offer here. If you value the part count and final design over the enjoyment garnered from actually building the thing, then this should be classed as a bit of a bargain. However, the fragile nature of the build takes away from the sense that this is a premium product.

Once finished, 10279 Volkswagen T2 Camper Van is a very impressive-looking model that captures the unmistakable and iconic aesthetic of a VW Camper Van almost faultlessly. Fans of the VW brand will no doubt love the authenticity and levels of accuracy this set offers. However, fans of LEGO for Adults vehicles in general may be quite disappointed with the build experience.

It’s nowhere near as enjoyable as some of the more recent models, such as the stylish 10295 Porsche 911 or the excellent 10274 Ghostbusters ECTO-1. Parts of the build feel unnecessarily complicated, and others feel a little too simple.

Despite its bulky appearance it’s also a very delicate, and sometimes highly frustrating, model to build and move around. The features don’t feel particularly sturdy and can be quite a pain to open and close, and the fact bits regularly fall off just becomes annoying after a while.

Whether or not this is something to recommend really comes down to what you look for in a LEGO set. If you’re after an engaging and entertaining experience from start to finish, then there are far better LEGO for Adults sets out there. If, however, you are after a very decent-looking LEGO Camper Van to display (without ever touching it) regardless of the building process, then this is a set you’ll be sure to get some mileage from.

How long does it take to build LEGO for Adults 10279 Volkswagen T2 Camper Van?

10279 Volkswagen T2 Camper Van is the second-largest LEGO for Adults (formerly Creator Expert) vehicle, and as such will probably take around five to six hours to finish.

How many pieces are in LEGO for Adults 10279 Volkswagen T2 Camper Van?

How big is LEGO for Adults 10279 Volkswagen T2 Camper Van?

How much does LEGO for Adults 10279 Volkswagen T2 Camper Van cost?