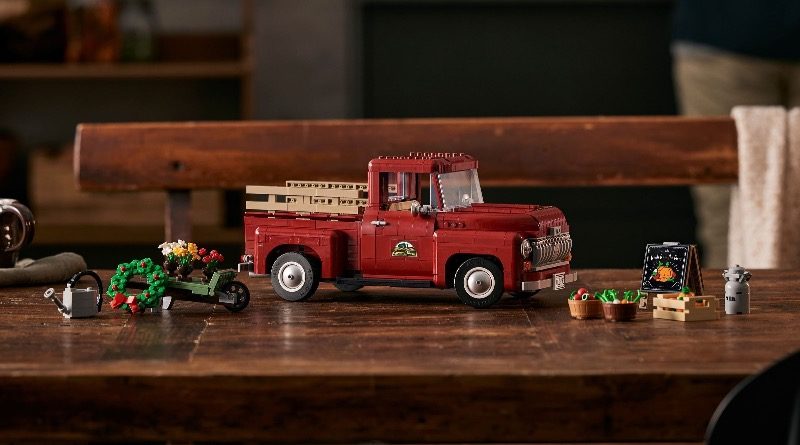 With seemingly zero fanfare, the LEGO Group has revealed another addition to its fleet of Creator Expert-style vehicles in 10290 Pickup Truck.

With 10295 Porsche 911 already on shelves and a Volkswagen T2 Camper Van rumoured to be on the way perhaps as early as next month, 10290 Pickup Truck marks a boost in the number of vehicles released under the LEGO for Adults (formerly Creator Expert) banner in 2021.

Unlike those other two sets, however, there appears to be no licence attached to this one. Instead, it’s a generic 1950s-style pickup truck cast in dark red, and includes features such as a step-side bed, removable wooden railings, and opening doors and tailgate.

You’ll also find a wealth of mini-builds and accessories in the box, reminiscent of 10242 MINI Cooper MK VII’s picnic blanket and cooler, which reinforce 10290 Pickup Truck’s imagined role on a working farm. There’s a wheelbarrow, watering can, crate with pumpkins and even a festive wreath, adding a seasonal touch to the truck’s display options.

The reveal of this set also deals a blow to rumours of 10290 DeLorean, given the conflicting product numbers, although it doesn’t count out the Back to the Future-inspired model altogether: the rumours could simply have mixed up the set number. We’ll keep you posted.

US fans can pre-order 10290 Pickup Truck now. Consider supporting the work that Brick Fanatics does by doing so using our affiliate links. Thank you!